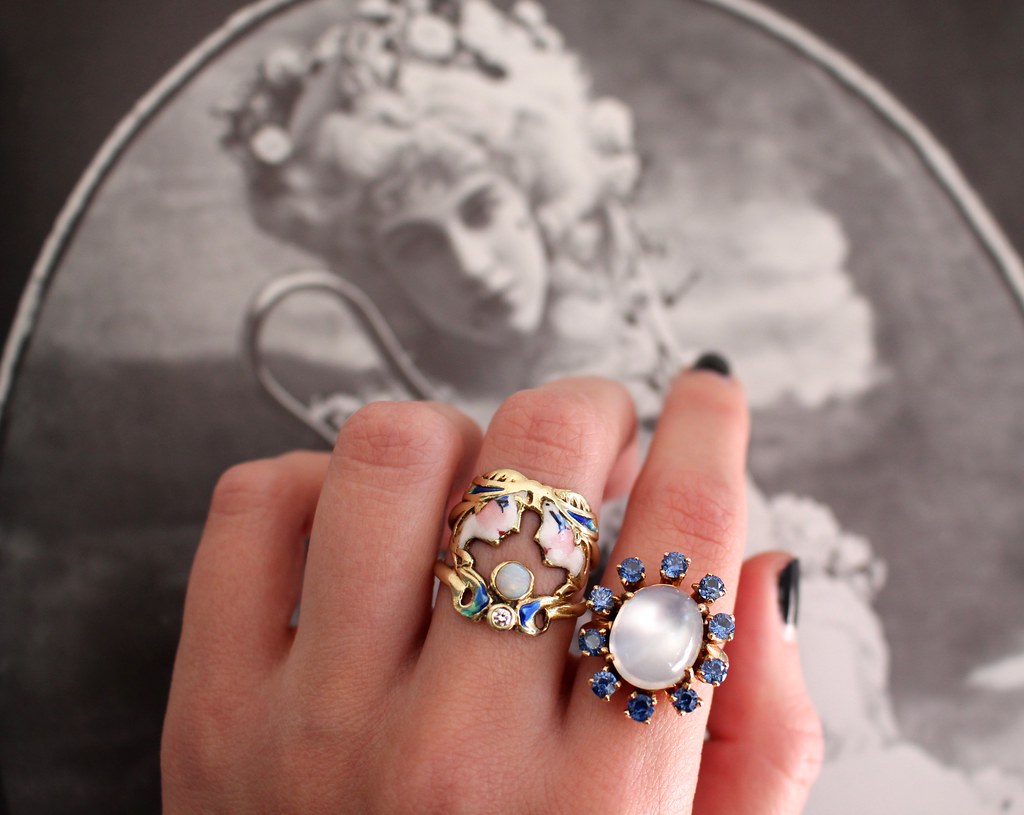 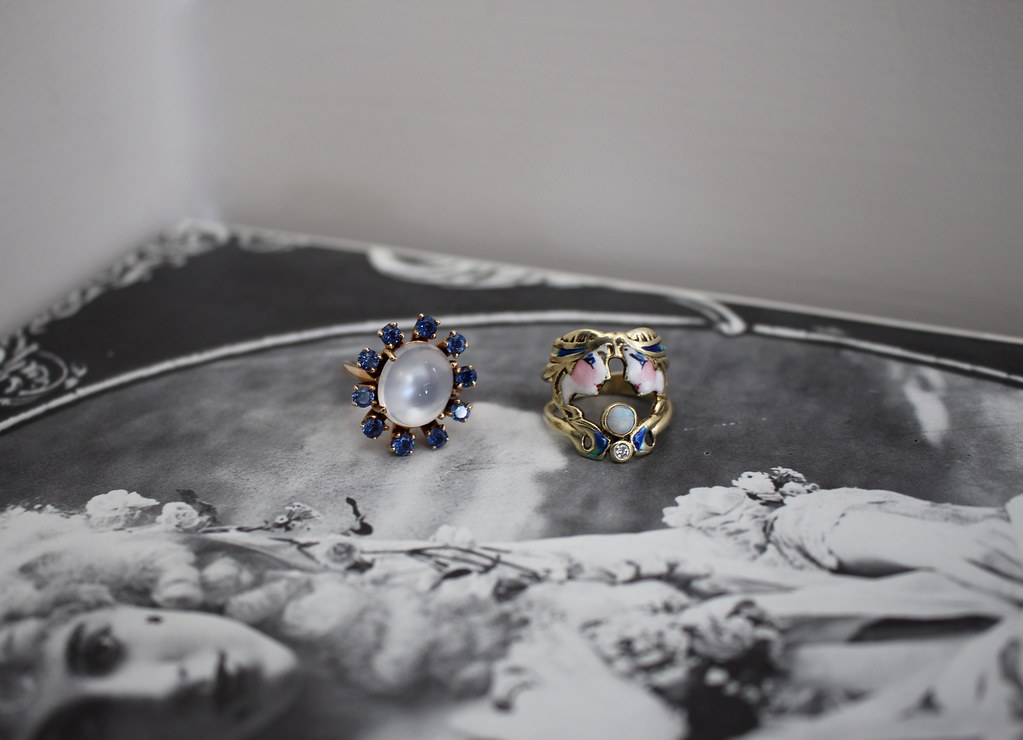 I know just about everyone that collects antique jewelry has a list of pieces that are on their “Holy Grail” hit-list.  Maybe it was a ring that “got away” on eBay or something that you once saw at a shop and decided not buy, but you totally regret now.  Or it could just be a piece that you don’t know exists, but you want something that has a certain gemstone in it and you’re just searching for that perfect piece!  Sometimes as a collector, you don’t know until you see it!  And when you do—there is a very distinctive feeling that goes along with treasure hunting…this is what makes it fun!

For me, these two rings are perfect examples of both situations…

The enameled Gemini Twins ring is a ring I had been hunting for for the past three years!  It all started with an eBay auction I had missed out on, even though I had it saved and was trying to make sure I didn’t miss!  That always happens!  Since then, I have been on the lookout—between antique shops and eBay, with no luck.  I came across one before Christmas after an Instagram friend (@baviles240) pointed it out (she has an exact match and knew that I had been hunting).  Unfortunately after messaging the seller on eBay, the verdict was it couldn’t be sized!  The enamel would not hold up against cutting and pulling the gold inwards to make smaller. Crazy to have finally found what I had been looking for, only to be disappointed!  Nevertheless, I had saved the listing in my eBay Watch List and enjoyed staring at it every now and then, seeing if it had sold.  One day I was surprised to see another one show up under the listing under “Similar Items” and the price also shocked me–more than half less the other ring, posted by someone just “cleaning out their closet for the New Year.”  For that price, I didn’t care what size it was, I was willing to take the chance of it breaking when trying to size it. I also lucked out because when I received the ring, it was a lot smaller than what the girl thought it was, so instead of going from a 7 down to a 4.5, it was actually a 5 3/4 in real life, so sizing was as bad–although still a risk!  Was so happy to have this ring a part of my collection, with a long/interesting story on how I found it!

The moonstone and sapphire ring is quickly becoming one of my most favorite rings I own. It was one of those where I wasn’t sure what I was looking for, but I knew it when I saw it while looking through Lang Antiques’ pages and pages of rings that it was the one!  I wanted a moonstone ring since I didn’t have anything in moonstone, and I’ve always loved the combination of moonstone with sapphire–so that was the general idea of what I was looking for.  Suzanne, owner of Lang Antiques, told me that it reminded her of the exhibit that was at The Forbes Galleries in NYC in 2013 called Out of This World! Jewelry in the Space Age–and after receiving the ring, she is totally right!  Moonstone has such a magical feel, I know it has a lot to do with its adularescense, but I still can’t get over that mother nature created it!

>> What are some pieces on your Treasure Hunting list?!