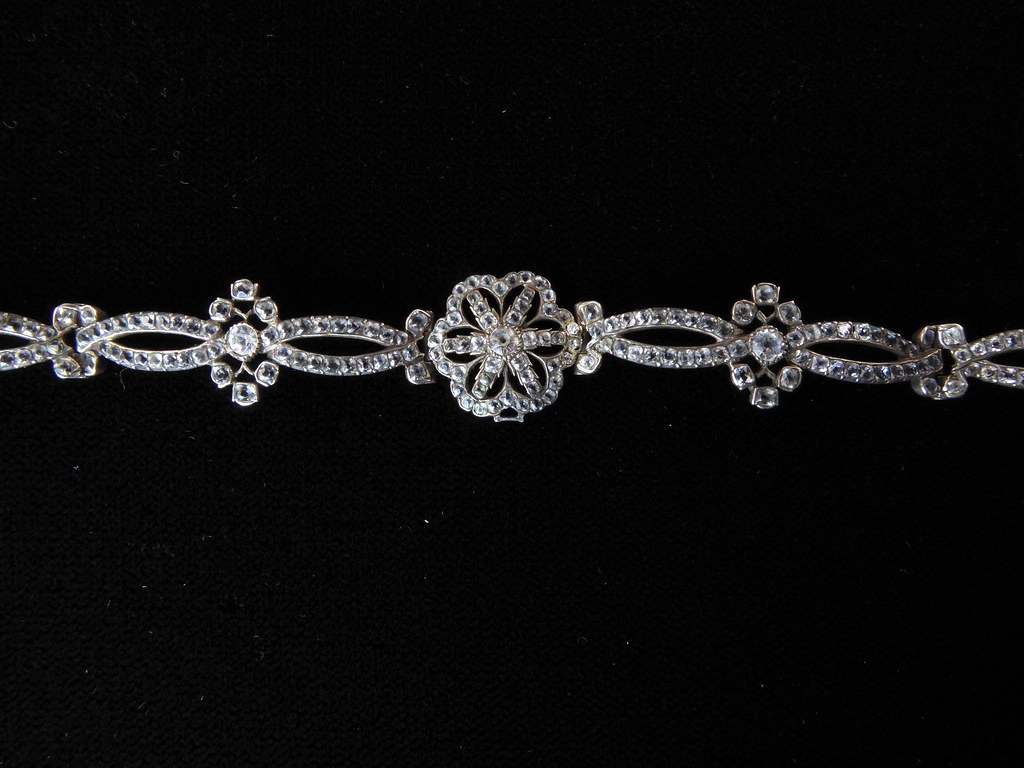 The popularity of Georgian jewelry has resulted in the market being flooded with fakes and the best way to avoid being sold a fake is to educate yourself. This post addresses how to identify genuine Georgian jewelry and is wonderfully written by Lisa of Lisa Kramer Vintage, a trusted expert on antique jewelry and in the business since the late 90s. She is also contributing another post tomorrow, which will be about what to look for in fakes and repros.

When evaluating a piece of jewelry you need to look at many characteristics of a piece. Think of yourself as a detective and design, materials, and construction are your clues.

SETTINGS: the most typical style of stone setting during the Georgian era was the crimped collet setting which was often cut down between the crimping to create prong-like protrusions; these are referred to as cut-down collets. Georgian collets were made from very thin sheet metal that was burnished tight to the stone to keep out air and moisture which would cause foils to tarnish on closed-back pieces. 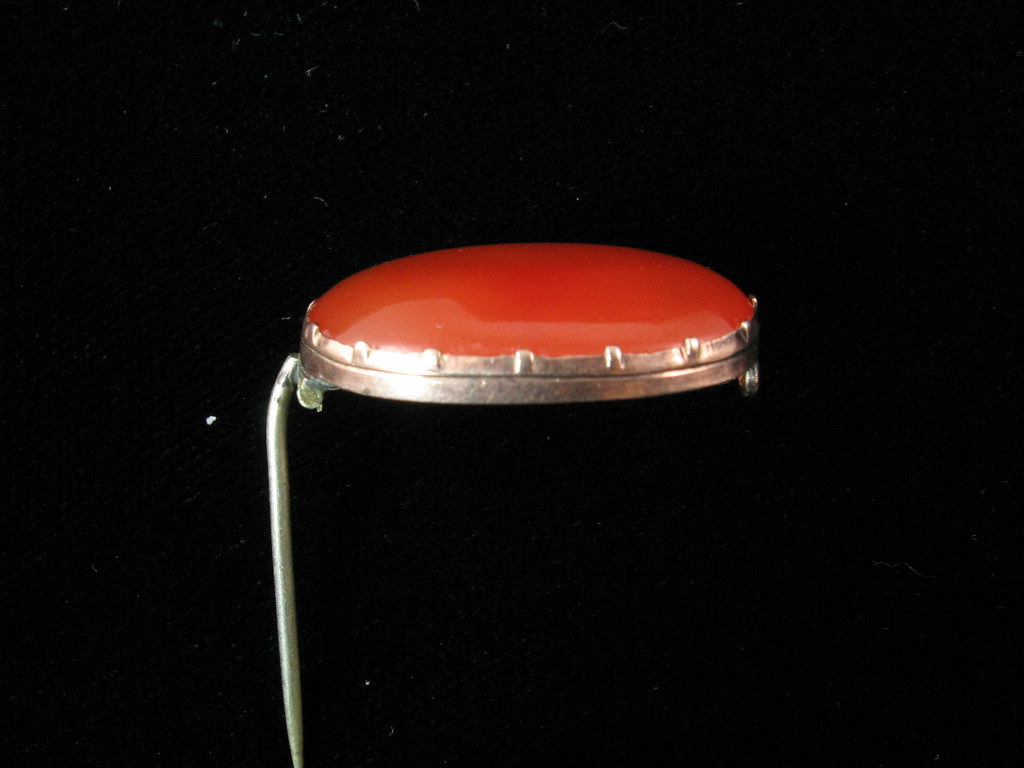 Red flag: If you see a lot of gaps between the edges of collets and stones this is a clue that it might not be a Georgian piece. Granted, over the years collets are sometimes damaged, but a finely-made collet with later damage looks different than a poorly made one.

Clear stones were usually set in silver and colored stones were often set in gold. Most often, stones have closed-back settings that were foiled. Clear stones had foils added to improve their reflectivity; these were usually made of silvered copper and sometimes you can see the copper exposed after years of oxidation as you can see in the photo of the earrings where one the foils on the right has had some damage and the copper is exposed. 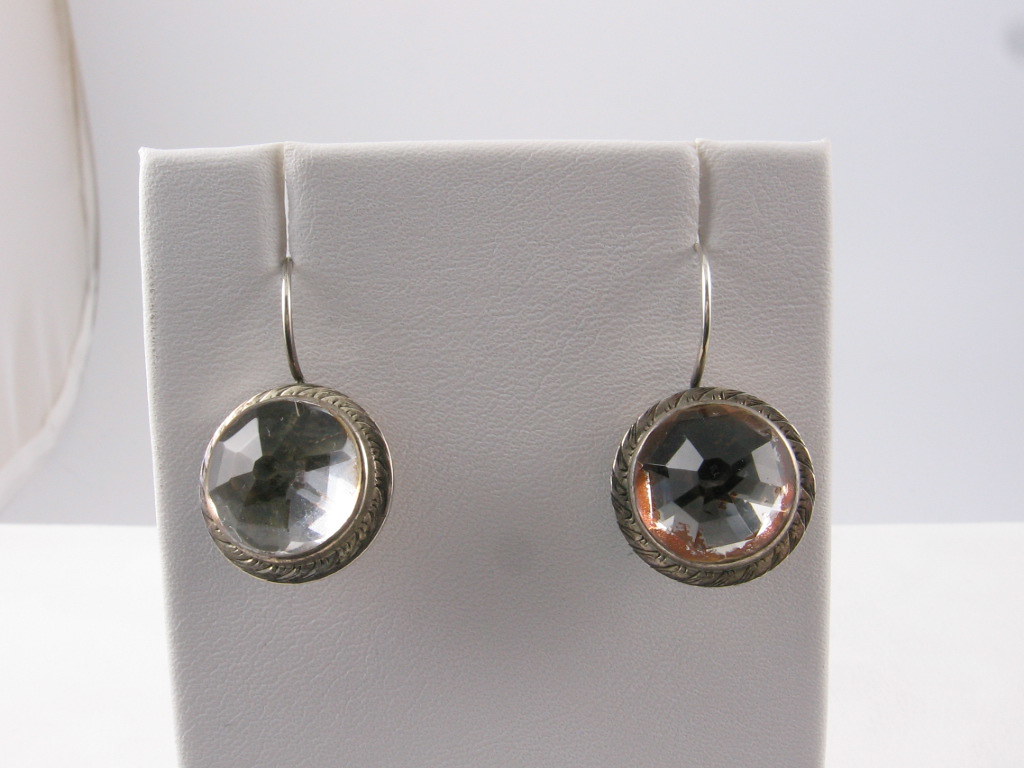 Colored foils were used to add color to clear stones, improve the color of colored stones, improve reflectivity, or make a lesser gemstone like rock crystal look like a more valuable stone. Opaque stones like agate, or dark stones, will sometimes have open backs. However, if a stone had good color or reflectivity it was sometimes left open backed. 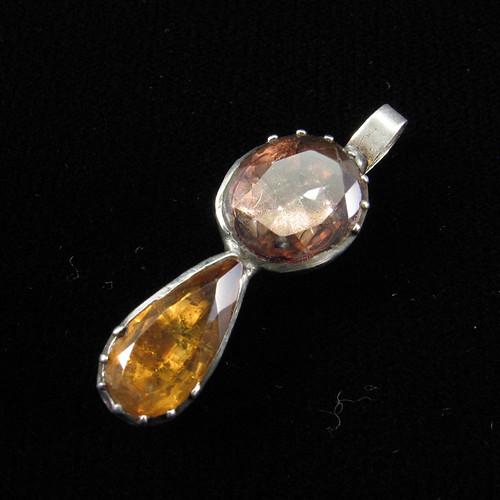 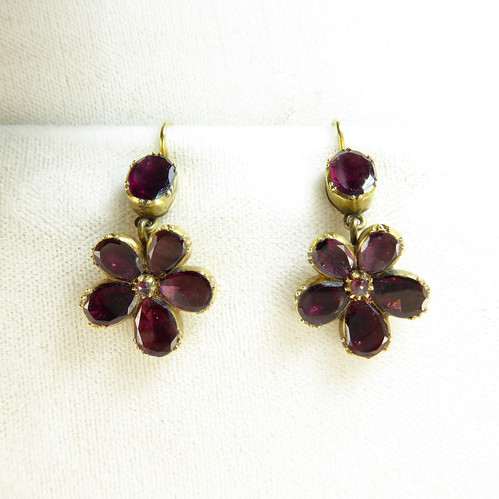 Red flag: I have seen hundreds of crudely made rose-cut diamond cluster rings and 5-stone rings for sale in the past few years. These rings usually have poor quality diamonds and crudely made, lumpy, crimped silver settings. Most of these have been made in the last 20 years or so. Think about how cheap it is to make a ring like this relative to how much they sell for because of their purported age, and you will understand why there are so many around.

Diamonds: The wheels used to cut gemstones in the Georgian era were slower than modern equipment, so cutting wasn’t as precise as in modern times. As a result, facets usually aren’t as uniform as you would find in a modern piece. Also, diamonds hadn’t yet been discovered in South Africa so the supply was limited. Jewelers were trying to maximize the visible face of stones as much as possible, so rose-cuts will often be very shallow, practically slivers, of stone and somewhat irregularly shaped. In addition, the size of stones will often vary slightly in cluster rings.

The quality of diamonds in the Georgian era was not as good as today by today’s standard of the 4 “C”s (the exception are Golconda diamonds, but these are very rare). So Georgian diamonds are likely to have some inclusions. On the other hand, look carefully at the construction details of a piece if the diamonds are very heavily included. You may have a genuine Georgian piece or you may have a cheaply-made modern piece with poor-quality diamonds.

Rose cuts and cushion cuts were the most common cuts of stone with occasional table cuts and step cuts. Towards the latter part of the Georgian era early versions of round European cuts started to appear. But remember, just because one of these types of stone cut is used, doesn’t make it old.

Georgian paste will often have a black dot painted on its culet to give it a sense of depth; you will often hear it referred to as “black dot” paste. These black dots are a sign that a piece is genuine since it is a labor-intensive detail unlikely to be found in a newer piece. 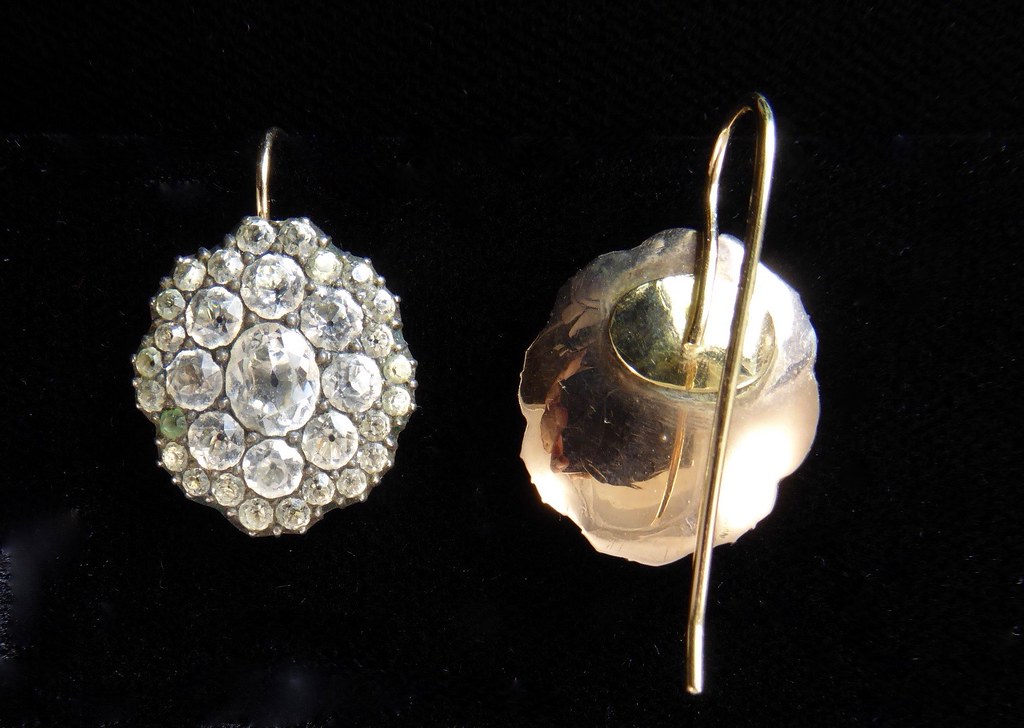 Red flag: I’ve seen some fake Georgian paste earrings with a hole at the back of the closed-back setting that gives the appearance of a black dot when viewed from the front. You would not find a hole like this in a genuine Georgian piece since it would let in air and cause the foil to darken.

Georgian paste was hand-cut, just like gemstones, so you will find irregularities in facets and between stones. If all the stones on a piece look identical under magnification it is likely that you have a later piece. Eighteenth century paste will often be cut into unusual shapes; glass is much easier to cut than harder gemstones so gem cutters were able to get creative. Around 1800 paste became more uniformly round, but still hand-cut, so this can help you circa date a piece. 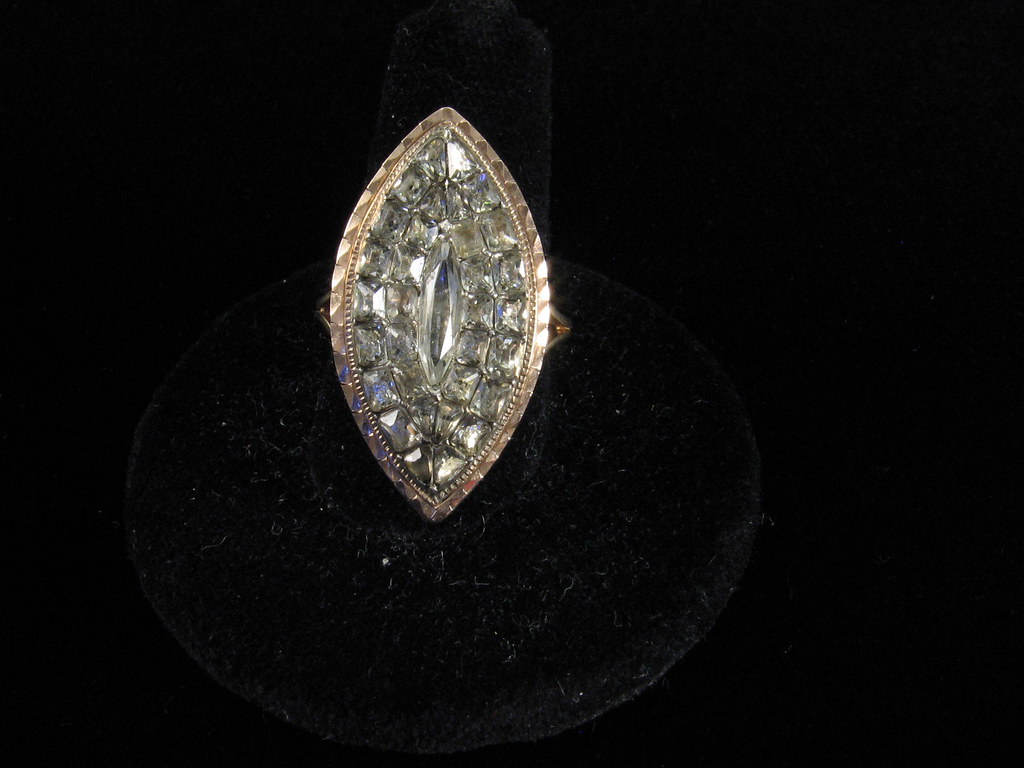 Because paste isn’t as valuable as fine gemstones it isn’t faked as often; however, beware of late 19th century and early 20th century Georgian revival pieces that are being sold as genuine Georgian pieces (the second post in this series covers this in more detail).

Materials: some materials commonly found in modern jewelry were not available in the Georgian era so if a piece contains one of these materials it is either not Georgian, or has had a significant alteration:

Synthetic stones: Although some processes for creating synthetic gemstones were invented in the mid-19th century, synthetic rubies and sapphires were not commercially available until the early 20th century.

White gold: the alloy for white gold was patented in 1915

Platinum: prior to 1895 there was no torch hot enough for jewelers to commercially produce platinum jewelry. Prior to this time small amounts of platinum were occasionally used in jewelry, but it is very rare.

Gemstones: tanzanite, demantoid garnets, and tsavorite garnets were discovered after the Georgian era.

Weight: Georgian jewelry is often a lot lighter than an equivalent piece made today. During the Georgian era raw materials were harder to come by than they are today. Gold hadn’t yet been discovered in California and Alaska. Diamonds hadn’t been discovered in South Africa. Jewelers mostly used thin sheets and wires of gold and silver to fabricate pieces. Georgian chains are featherweight; a heavy chain would be a clue that it is a later piece. Collets holding stones are made from very thin metal; heavy collets and castings are a clue that a piece might be a reproduction.

Conversions and alterations: conversions of Georgian jewelry have been popular since the Victorian era and are wildly popular today. Georgian buttons were often converted to brooches, rings, pendants, and earrings. Buckles are often converted to brooches. And fragments of pieces pieces are sometimes re-purposed. While purists may balk, as long as a conversion is disclosed, it is considered an acceptable practice today. The black dot paste cluster earrings, navette ring, and solitaire earrings in this post are all conversions from buttons with the cluster earrings having been converted in the Victorian era. 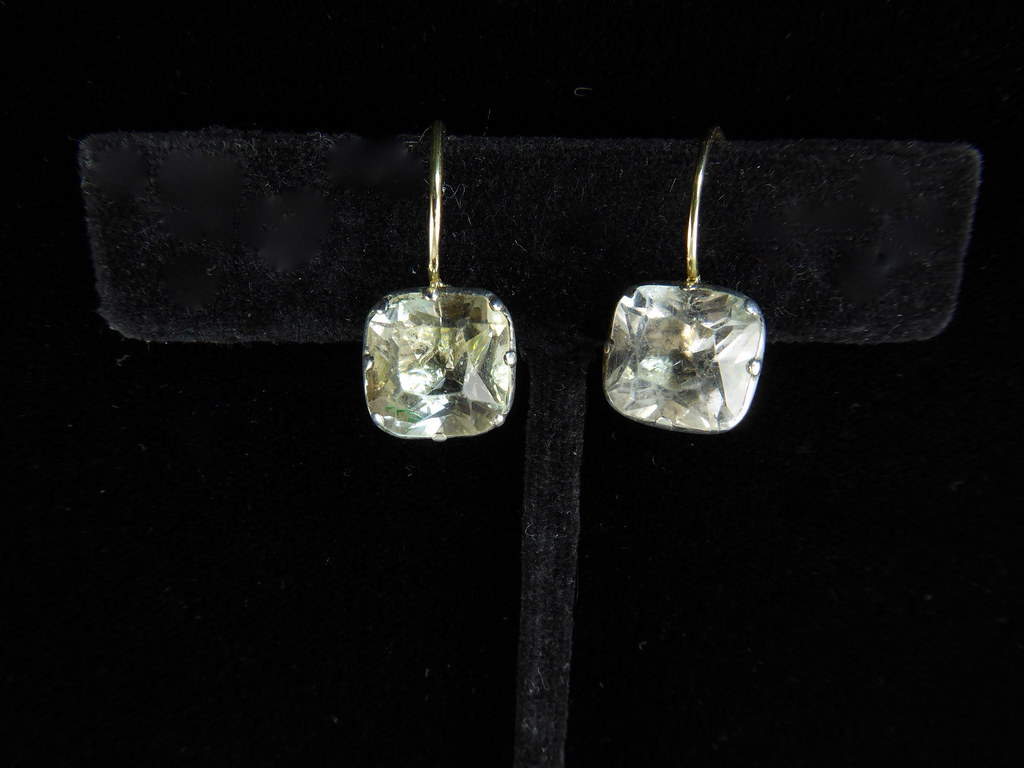 Marks: hallmarking of jewelry was uncommon during the Georgian era, but is occasionally encountered. So presence of a hallmark is a red flag, but also a useful tool, since it provides information that you can research.

Craftsmanship: Georgian jewelry was mostly handmade with a high quality of craftsmanship. The better the craftsmanship, the less likely a piece is a fake because of the cost of producing it.

Look at the beautiful workmanship of the Georgian paste pieces in this post and think about this: if Georgian jewelers used such care in making pieces set with glass stones, it’s hard to believe they used lesser-skilled craftsmen when making jewelry set with diamonds and other gemstones. 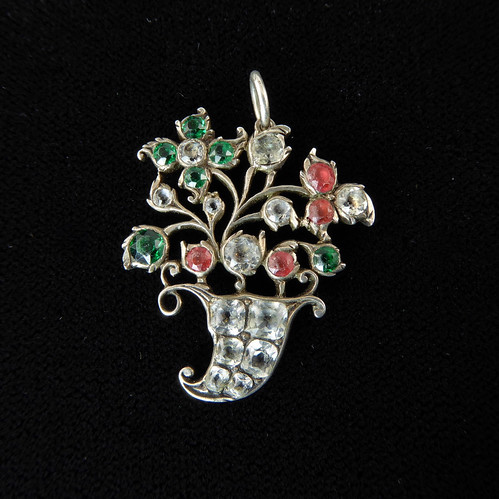 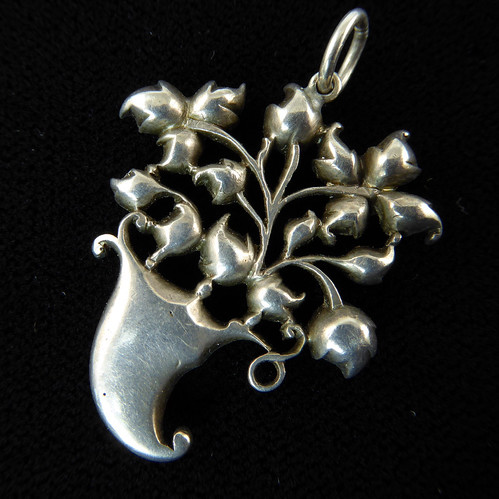 Wear: while the occasional piece of Georgian jewelry was never, or rarely, worn this is a rarity. Even a piece that was never worn is unlikely to have been optimally stored for 200 years.

Look at your own jewelry and notice how it gets damaged: high points of metal get worn or dented; facets of stones get scratched and chipped; clasps, ear wires, loops and hooks break; long necklaces get caught on things; rings and bracelets get banged on things; engraving gets worn down; enamel gets chipped; jewelry bangs against other pieces in a jewelry box. Over time there also can be chemical damage: moisture and humidity can cause foils to darken on closed-back settings; hair product can fill crevices; sweat can cause damage; silver polish can leave residue and damage pearls; acid can darken metals; turquoise can change color; seed pearls (especially on rings) start to dissolve.

Red flag: a piece that seems too perfect. It may be genuine, or have been restored, but when a piece is being sold as “like new” look closely at the details of design and construction to see whether they seem “right”. Also, check to see if a part of a piece is in better condition than the rest of it; if this is the case, this may mean it has been re-enameled, had a stone replaced, had another type of restoration performed, or be a marriage of old and new components. This can be acceptable, but should be disclosed.

Conclusion: It’s not possible in one blog post to cover every characteristic of jewelry that was made during the 116 years that comprise the Georgian era, or every national and folk style. I’m sure there are genuine pieces on the market that in one or more ways contradict some of the characteristics identified above. However, this post is a good starting point for evaluating the most common pieces of Georgian jewelry in today’s market. For more detailed information, check out the resources below.

Antique Jewelry University: a wealth of information can be found on this site. Particularly useful is a video where they evaluate three Georgian-style rings element-by-element. Scroll down to the bottom of the page in this link for the video.

“Georgian Jewellery” by Ginny Redington Dawes and Olivia Collings. This book is the bible on the subject.

“World Hallmarks, Volume 1”, by William Whetstone, Danusia Niklewicz, and Lindy Matula. This is the standard reference for European hallmarks