Elizabeth Taylor was an icon.  For some it was her fashion, for others it was her closely watched life, and for people like myself and Sunny S. Bond, it was her JEWELS.  But the dame was so much more for Sunny–she was an inspiration, a role model and a loving obsession.  Sunny has teamed up with Gem Gossip to talk about some well-known pieces from Elizabeth Taylor’s jewelry collection, as well as tell you how she is now a proud owner of a ruby “Fan Ring” from Ms. Taylor’s very own jewelry box.

Take it away, Sunny:

Today would have been her 82nd birthday, and I can’t even imagine what gorgeous baubles she would have unwrapped.

Coming from a family of women who love jewelry, even at a young age Elizabeth Taylor was always on my radar. It wasn’t until I began studying jewelry myself did I really understand what all the fuss was about.  While at NYU, I fell so hard for my girl ET, I wrote my thesis about her jewelry collection, immersing myself so deeply in her world, I have yet to come up for air.

Here are just a few of my favorite pieces, and the story of how I became a custodian of her jewels in my own right. 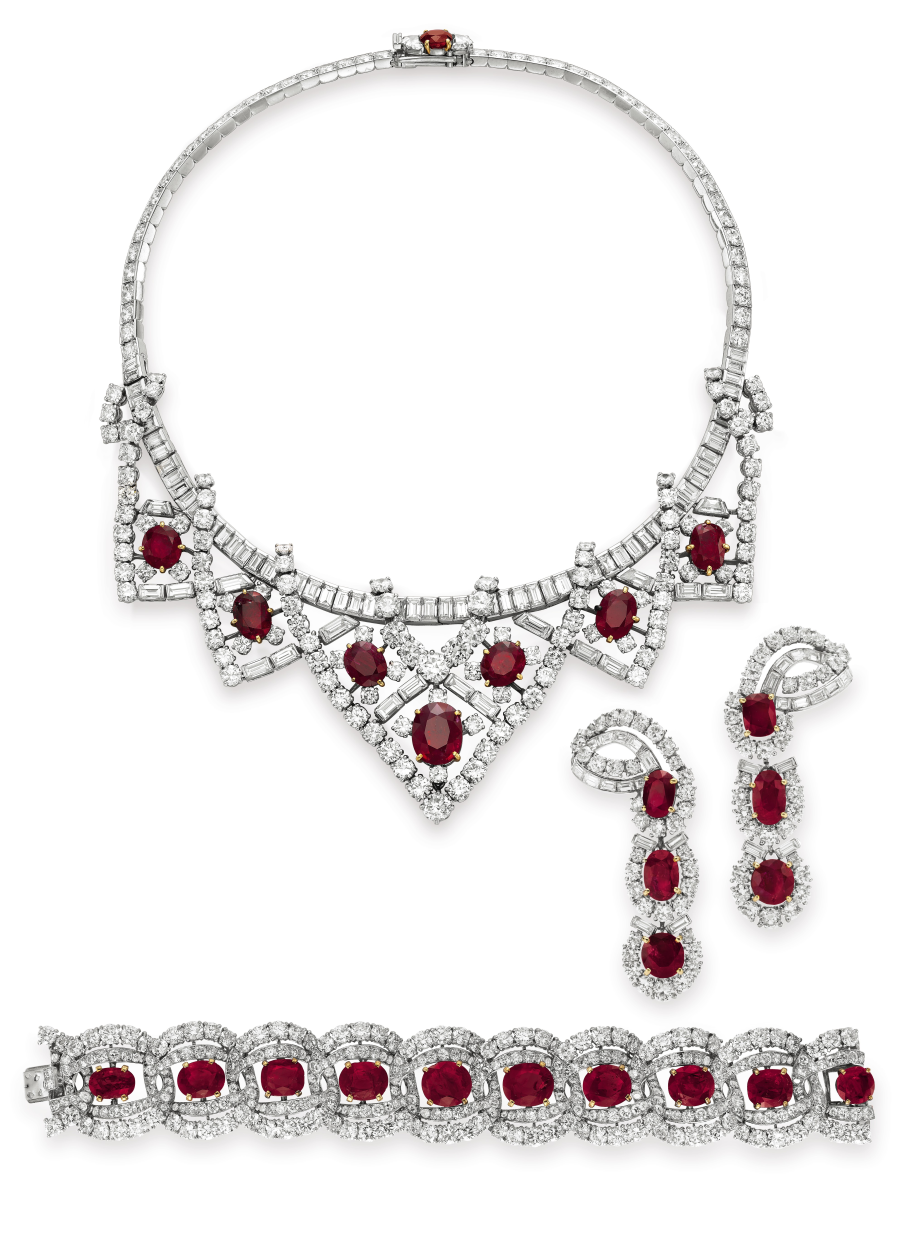 As the story goes, in the summer of 1957 Taylor and her third husband, Mike Todd, were vacationing at a private villa in the French Riviera. She was luxuriating in the pool, wearing her diamond Cartier tiara no less, when Todd asked her to get out. He then began draping her, bib necklace first, with this beyond fab ruby and diamond Cartier suite. By the end she had a bracelet and earrings to match. Life doesn’t get much better than that. 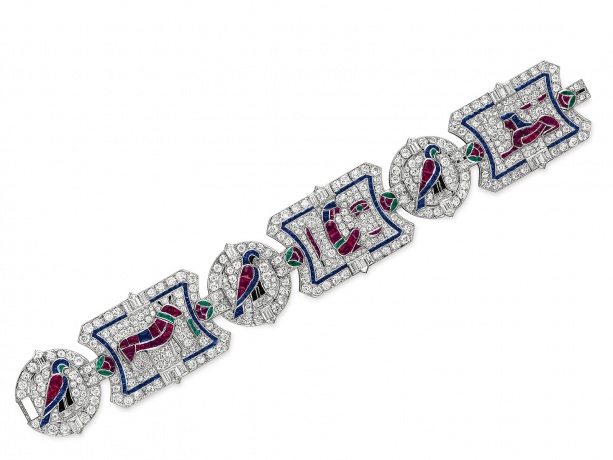 One of my favorite pieces from Taylor’s collection is the King Farouk bracelet, c.1925. Like Elizabeth, Art Deco is one of my favorite stylistic periods and this bracelet is oozing with it. It has all the classic Art Deco elements: platinum, diamonds, and calibré-cut colored stones. Plus it’s all about one of the biggest events of 1922, the discovery and excavation of King Tutankhamun’s tomb, which sent the whole world into an ancient Egyptian frenzy. If you look closely, you can even see hieroglyphics. AMAZING. 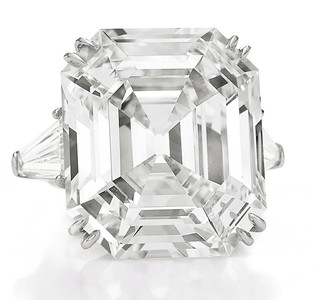 Possibly her most famous piece, Richard Burton (her 5th and 6th husband) bought it at auction in 1968. It’s 33.19 carats, D color, asscher cut, and potentially flawless. It’s also a type IIa Golconda diamond, meaning it’s from the most perfect mine in the world. It’s literally perfect… I once read that she would wear it everywhere, with anything, jeans, sweats, ball gowns, it didn’t matter, she wouldn’t leave home without it. It was her favorite thing she ever owned.

Named after its original owner, Vera Krupp, the wife of the very wealthy Nazi industrialist Alfried Krupp, Harry Winston purchased it and later put it on the market where Burton snatched it up. Elizabeth, Jewish herself, said “…how perfect would it be if a nice Jewish girl like me were to own it.” I bet Vera is in a perpetual grave roll. Christie’s sold it in 2010 for $8,818,500 USD, where it was renamed The Elizabeth Taylor Diamond. Look at this postcard from ET to her parents really cutting to the point. 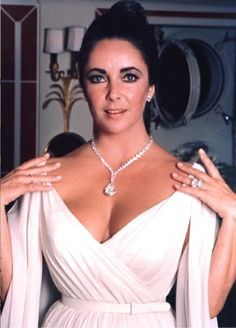 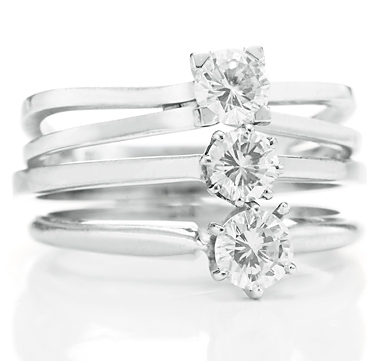 And lest you think ET was a size queen, here are her “ping pong diamonds”, which she wore every day for years. She won them after beating Richard Burton in a heated game of ping pong in 1970, with a 10 point spread. 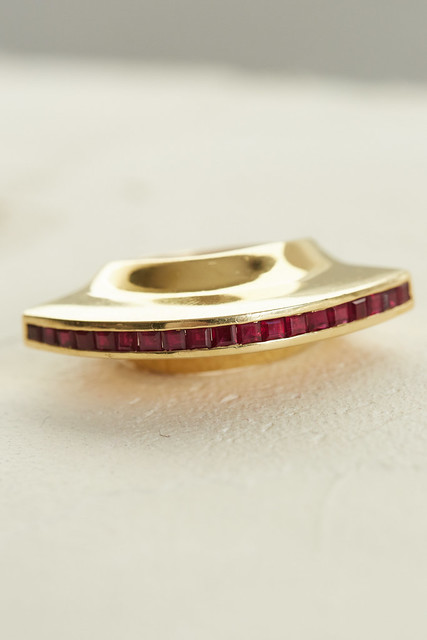 When my husband, Gordon, and I were fresh and new in the early stages of dating, I made it very clear that my own love affair with jewelry was no fling. Simply put, he knew what he was getting himself into. The day Elizabeth Taylor died, I went into my office’s conference room and cried for 20 minutes. Luckily, my boss was understanding and didn’t think I was a crazy person.

At the Christie’s preview of her sale, I walked around for hours gazing at these treasures I had studied for so long, sobbing and wearing the paper jewelry replicas they had for sale, the picture of eccentricity.

Together, Gordon and I poured over the online portion of the sale, daydreaming about what-ifs. We had gotten engaged a few months before and were lucky enough to have an heirloom ring from my side of the family. However, Gordon felt very strongly about wanting me to have something from him, and as the sale approached, he was ready. He said he sat at the computer for hours before the lots he knew I loved came up, sweating because he was so nervous.

The big reveal came on Christmas morning, my true engagement ring. It’s unusual, almost 1950s-ish, shaped like a fan, which is how it gets its name, “The Fan Ring”. It has a line of calibre-cut rubies set in 18K yellow gold, signed beautifully by Paloma Picasso for Tiffany & Co., 1980.

The second I put it on I got chills all over, and still do whenever I see or think about it. It had scratches and wear which means she actually wore it, it has her DNA in it! I have never and will never clean it. It’s magic for me, a symbol of my husband’s love as well as a real, tangible connection to my idol, something I never dreamt I would have. When I wear it, I can feel her energy, like I can take on the world.

This post was brought to you in collaboration with Sunny S. Bond