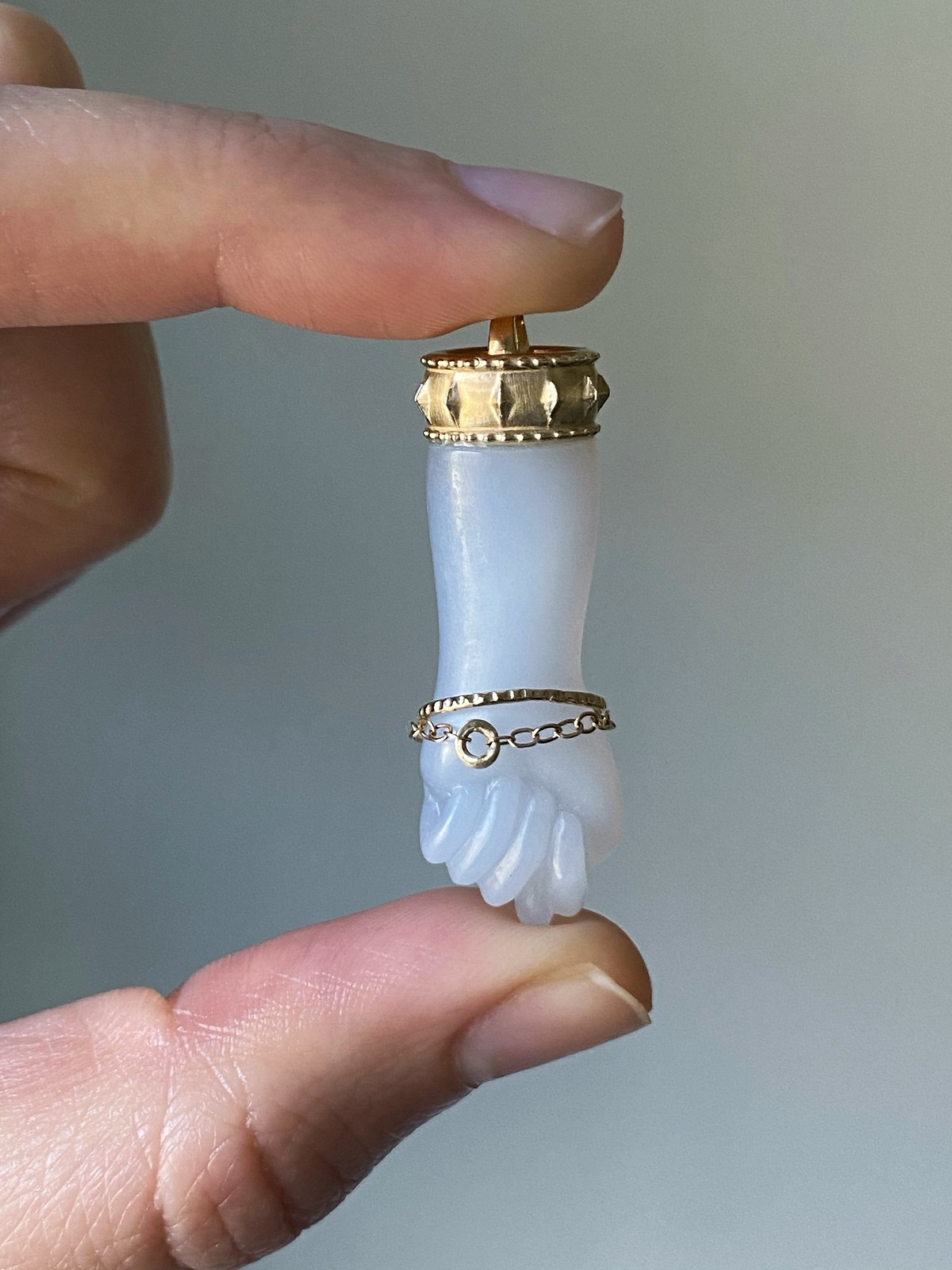 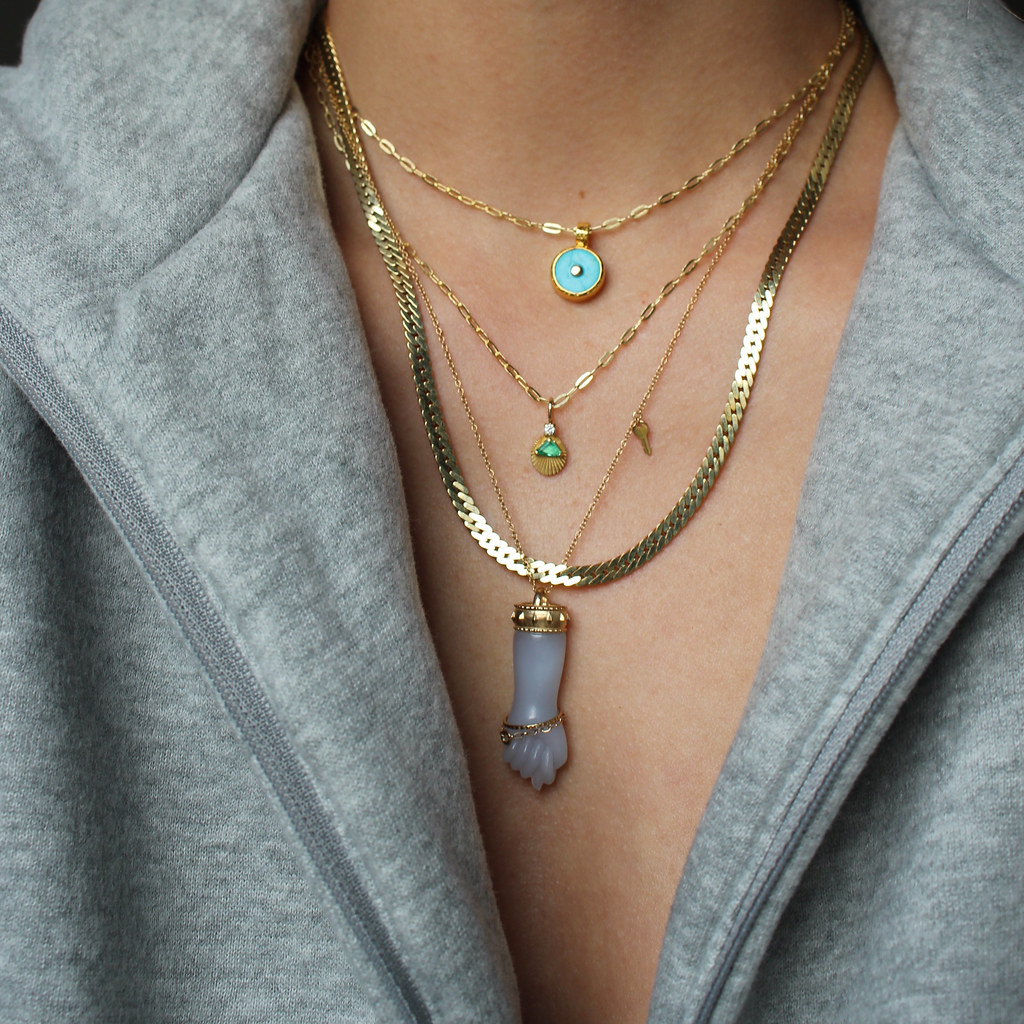 Figas are just one of my ultimate jewelry obsessions. My collection has grown and grown over the years, thanks to many antique dealers that know my love for them and often save them for me. I’m noticed recently that they are becoming harder to find and I’ve often wondered if there were ever new designers out there that would eventually recreate them. I’ve seen a couple here and there — but they’re mostly stones carved in India, usually mass produced and not the same in terms of detail and quality. So the unicorn I’m searching for here is a jewelry designer that hand-carves her own gemstones to create a figa pendant…sounds sort of like a long shot. Until I came across Sophie Gardner Jewelry!

Sophie puts in over 50 hours of carving into one figa, each meticulously created with lots of unique details like different end cap designs and outfitting them with bracelets. I was lucky enough to get to custom create one for my collection and seeing it come to life was so fun. I ended up choosing a blue chalcedony figa, with a studded end cap and two different bracelets (one chain and one bangle). I love how it turned out!

Sophie’s work is so inspiring, I had to learn more so I asked her some questions:

How did you get into jewelry? What’s your background?

“Like many gem geeks I started out as a little rock hound. My mom’s family is from the Oregon coast and I would spend hours and days on the beach agate hunting. My dad’s mother was a collector of rocks/gems from all over the world. She would let me choose one every time I visited – I still have every one – not to mention boxes and boxes from my own travels.

My mother is a glass artist and growing up I was so sure I would do anything to not have to try to make a living out of something creative. I started school as a graphic design major. I hated the computer part- so that didn’t stick. I switched schools and ended up at San Diego State, which happened to have an amazing graduate program for jewelry design. So I took a couple classes, fell in love and I ended up with a metal design degree (and figurative sculpture – which helps with Figas :). I scooted down to Carlsbad and went to GIA to get my GG and also completed their Jewelry Design program. I’ve been working as a jewelry designer (in some capacity), ever since.”

What led you to carving gemstones? What was the first piece you carved?

“I decided to try to carve gemstones in January – 2 moths before we got locked down. It was mostly out of curiosity, to see if I could do it. I wanted to try to carve my own Figa, but had zero idea where to start. I watched YouTube videos and tried to figure out what tools were being used. I bought books and lots of tools…broke a lot of tools, broke a lot of stones. I messaged other carvers who mostly ignored me, but finally found a couple who helped guide me on the best ways to cut, shape and polish. Honestly it was a solid 3-4 months of trial and error, with injuries and a few tears. The first piece I carved that gave me any feeling of accomplishment, or “Hey! I can do this” was a long, white chalcedony shell.”

Goals for the future — any new collections in the works?

“Honestly, when I carved my first Figa I felt like so many possibilities were revealed- I mean in art school, hands are always the hardest thing to draw/paint. So after carving one, I was proud of  this accomplishment. I have a few other collections sketched out and will be adding pieces as it makes sense- right now I want to build on the idea of personalizing these pieces that already have a lot of meaning. I think people have become a little more introspective over this past year and are seeking out pieces that resonate on a deeper level, that hold a memory, or spark nostalgia instead of just accumulating more stuff. This has been one of the gifts of this insanely difficult year.”