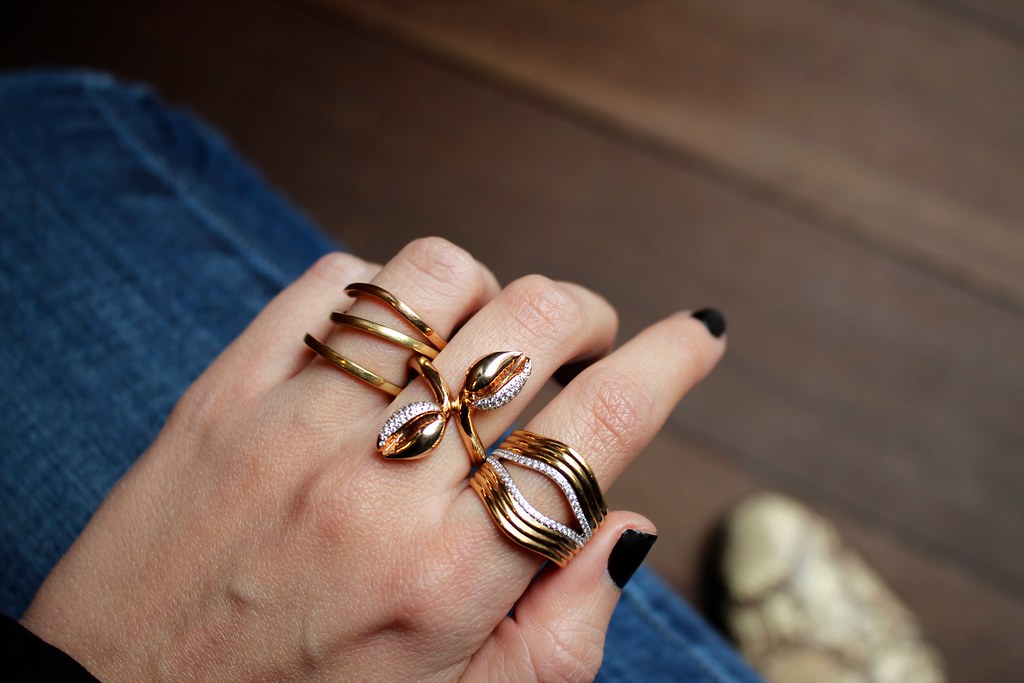 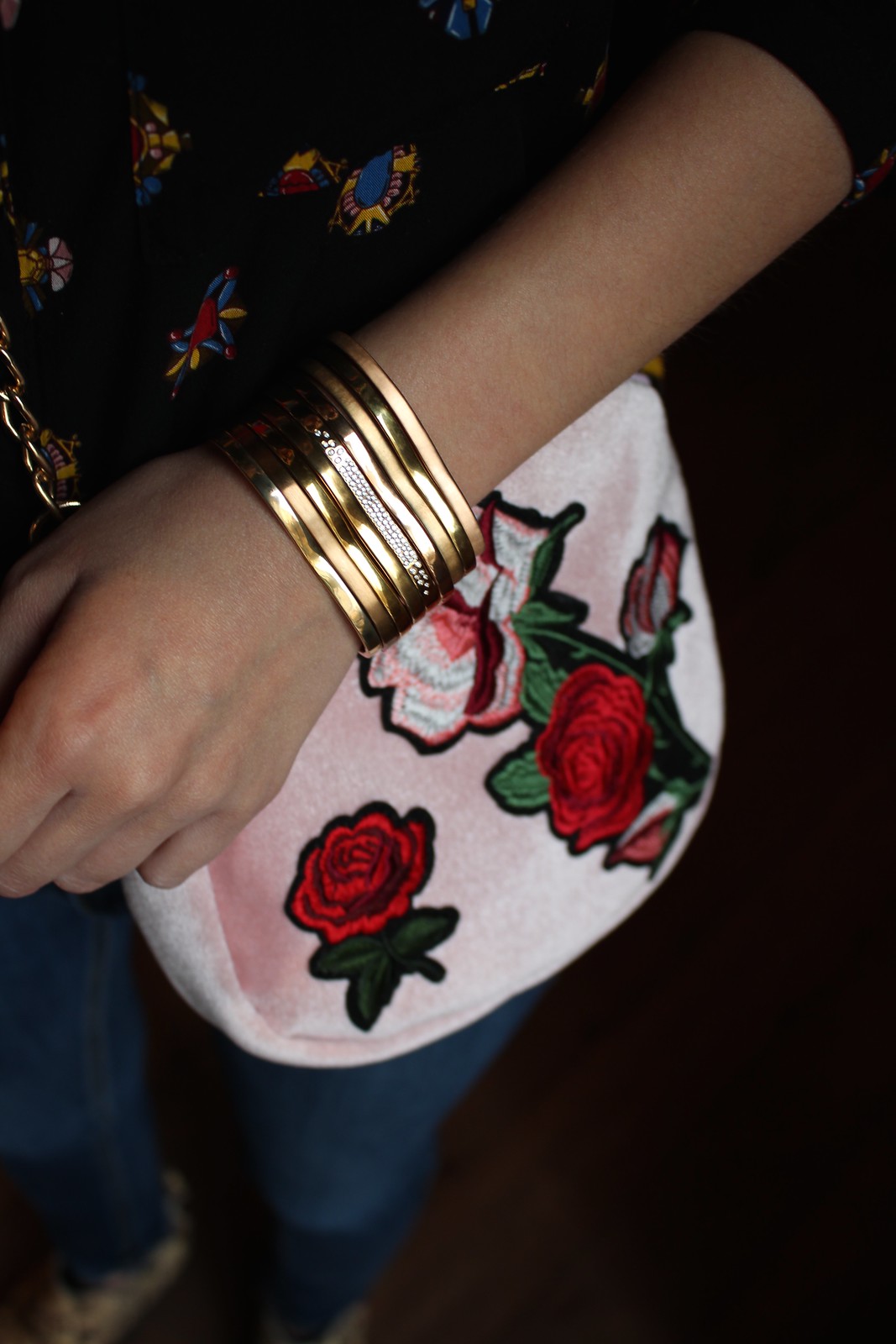 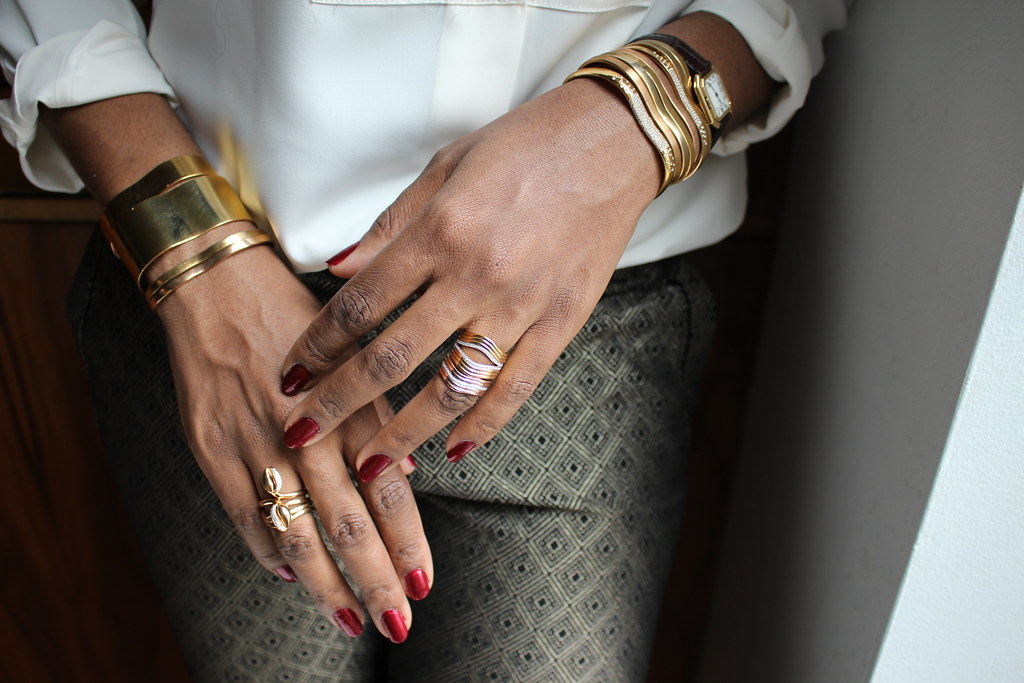 The cowrie shell plays a fundamental role in the collections of Catherine Sarr, the French designer behind Almasika Fine Jewelry—and there’s little wonder why. The cowrie, a mollusk which originates in the Indian Ocean, was utilized as money in various parts of the world for at least 1,000 years, and was introduced to the west coast of Africa, including Benin, by the 16thcentury. West African nations resisted the use of European currency well into the early 19th century, in defense of their pre-colonial sovereignty, preferring to maintain and protect the cowrie as a symbol of their collective past. Today, the cowrie is no longer utilized as currency, but often appears on objects, both decorative and divine, throughout the continent of Africa and its diaspora.  Sarr, who was born in Paris to Beninese parents, has traveled the world extensively, and uses the cowrie shell as her jewelry line’s point of entry in its mission to transcend cultural boundaries.

We caught up with Sarr to discuss her unique vision for her jewelry, the effect her travels have had on her creative process, and the humorous way motherhood helps to shape her designs. 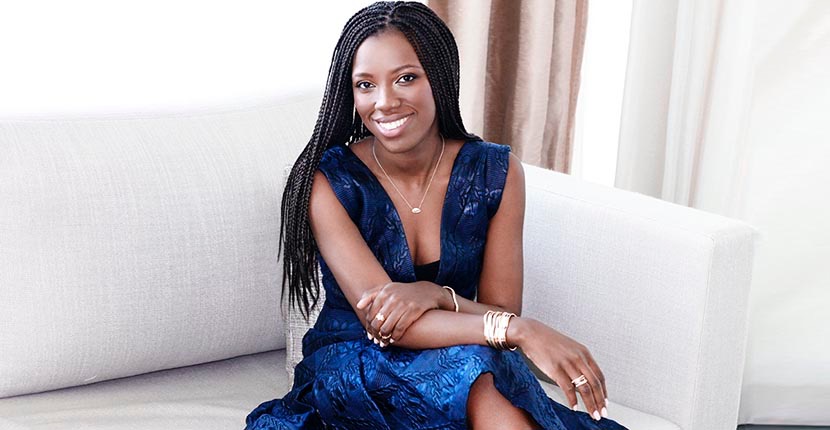 Can you tell us a little bit about the origin story of Almasika Fine Jewelry?

Almasika is very much linked to my personal story. My parents are from Benin, and I was born in Paris. I moved to London, where I lived for 10 years working in the fine jewelry industry. Then I moved to Abu Dhabi with my family, and now I’m in Chicago with my husband and my four children. What I realized along the journey is that, in all those places, I connected with people from all walks of life. I learned that we have much more that we share, than what separates us. I’ve always been fascinated by the cultural aspect of jewelry, so I decided to explore forms, symbols, and stories that are common to many cultures. That was my starting point with Almasika. I used the cowrie shell because it has this meaning in my culture, but also in so many other cultures, of spirituality, prosperity, and fertility.

While you worked in the fine jewelry industry, you encountered jewelers across the globe whose work was really a reflection and a meditation on their own cultures. What types of stories do you want to tell with your own jewelry collection?

It was fascinating, to see all those jewelers telling their stories. For my first collection, I wanted to go back to my own culture, and I initially explored the cowrie shell. I’m really interested in overlapping circles across cultures. Visually, I’m interested in universal form– universal, meaning that any human, regardless of their culture, will feel it as something personal. So, that’s what I wanted to say. 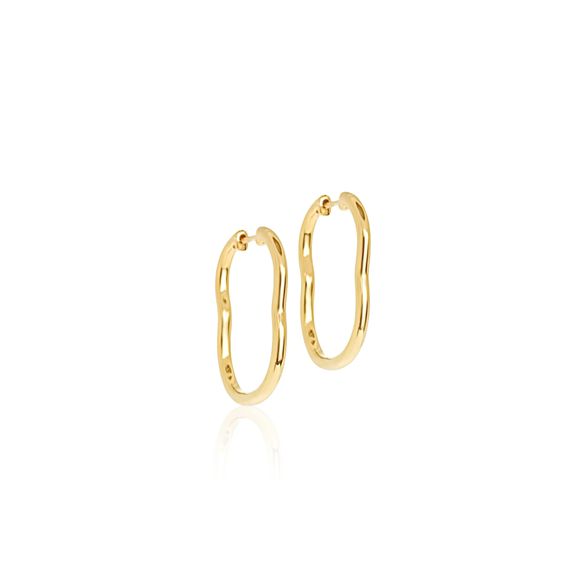 What made you decide to go from working on the business side of the jewelry industry to actually taking the leap into designing jewelry yourself?

It was really a burning desire to tell stories through jewelry and being able to design jewelry that I would want to wear. I wanted to be that vector of dialogue, as well, by exploring those commonalities across cultures.

You were born in Paris. Your parents are from Benin. You lived in London and Abu Dhabi. Now you’re in Chicago. How do you feel that living in all these places has shaped your actual creative process, the way you go about creating the art that becomes your jewelry?

They’re all such different places with different cultures and different ways of looking at art and creation. In both Paris and Benin, there is the love and pride of artisanship—a quest, almost, for perfection, for creating a beautifully-made piece. Then, the silhouette of my jewelry is understated, and there is definitely a Parisian element to that. In Benin, everything is ornate and colorful. More is more.

In London, I was on the business side of the industry. Meeting all those designers, for example Solange Azagury-Partridge, and many, many others showed me to look forward. There is still the beautiful craftmanship in London, but designers there were pushing the boundaries of design, of creativity, of what even counts as fine jewelry. In London, I learned to be bold in my choices, but also to be adventurous with regard to artistic ambition and who a jeweler is.

All of these places have contributed to what is Almasika today. 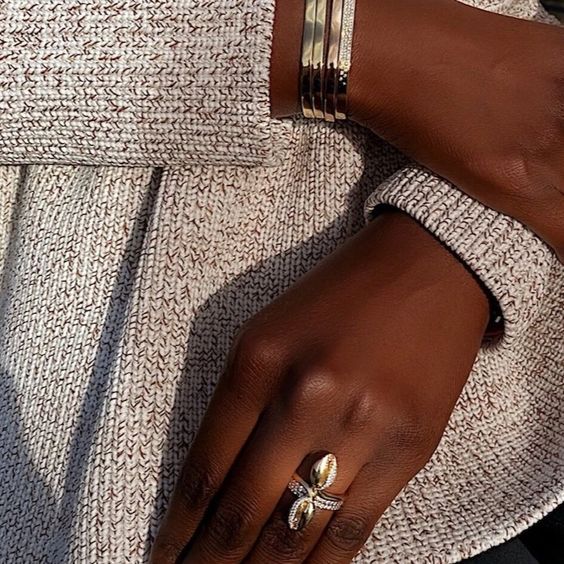 How would you describe your brand’s design aesthetic?

I’m attracted to the sculptural aspect of form, and curves that are soft. I like jewelry that echoes the line of your body; you almost forget you have it on because it feels very comfortable. I like a silhouette and a way of wearing jewelry that is understated, not over-complicated, and that really speaks to my Parisian upbringing. 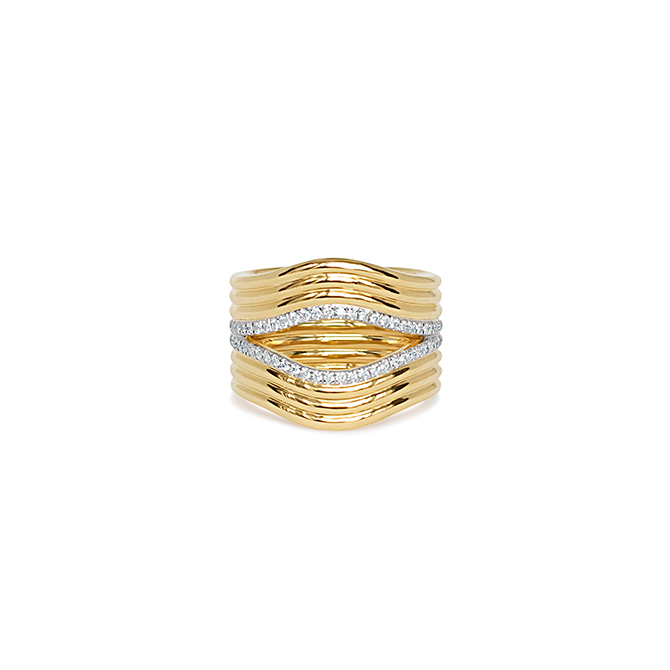 I found it very interesting that you and your husband are serious art collectors, and I was wondering if you see any of your taste in the art that you’ve selected for your home reflected in the jewelry that you design.

We collect contemporary art, and a bit of classical African art. In the contemporary art, there’s always a link to Africa and the diaspora, from Brazil to the U.S., and to other countries on the continent. With some of those pieces,  I looked at certain shapes and symbols that have common meanings in many cultures. I think what influenced me would be the power of telling stories beyond the actual objects. In contemporary art, you have an object, but the artist wanted to say so much more than what you actually see. That inspires me because that’s what I’m doing in my medium, in jewelry. The main challenge though, is that with jewelry, you have the form, you have the function, but you also have the beauty. I design jewelry that I hope to be beautiful, that people want to wear, that they want to give.

When you are designing your collections, do you have a specific wearer in mind? Do you think about what your ideal wearer is like and what makes your jewelry the perfect fit for them?

I don’t really see someone visually, because our clientele is from all over the world, different ethnicities and ages. It has been amazing to witness, being able to design jewelry that is attractive to teenagers and older women. What I’ve noticed in all those women is that they are all inherently curious. They are very, very curious and passionate about the world around them. The type of woman I design for, of course has a great sense of style, but it’s really about how they see the world, and their curiosity about the other. 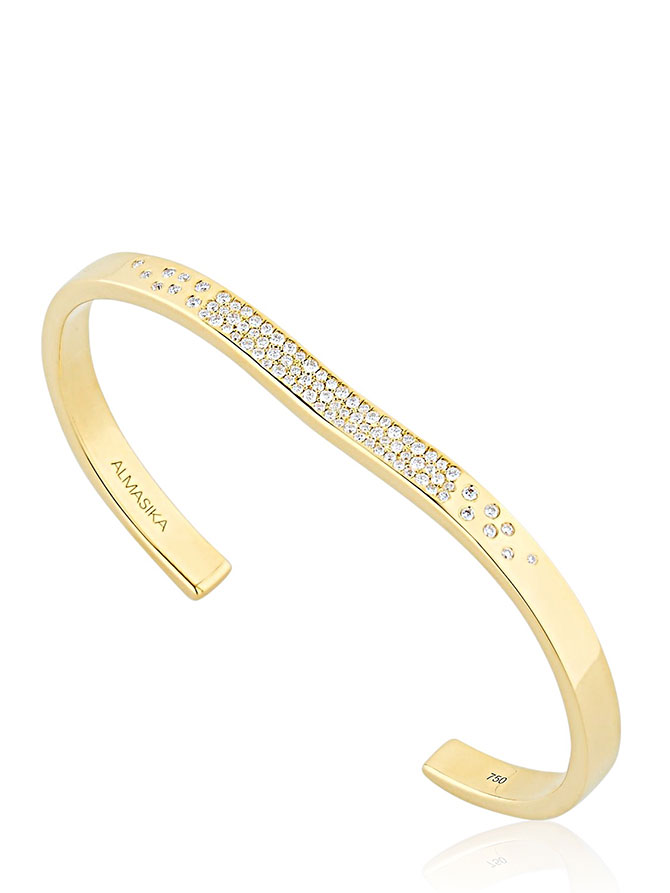 You said earlier that you have four children. Have you found that motherhood has had an impact on your creativity?

I don’t know if it’s the creativity, but in the process, first of all, I get a lot of unsolicited opinions [laughs]. Sometimes it’s positive, sometimes negative, but what I like with children is that, up until age nine, it’s really unfiltered. You get an honest opinion. And they have this pure attraction or rejection that I’m looking for.  I’m focusing on the form, and I want to find that kind of universal form that people will be attracted to. So when I show a piece of jewelry to my children, if they say it’s nice, I know that I’m getting somewhere.

Is there anything in either of your current collections that they really love?

Oh, the Berceau bracelets, which is a bracelet that follows your wrist and it’s very simple band of gold. They love that. Even my sons asked if they could have some made. 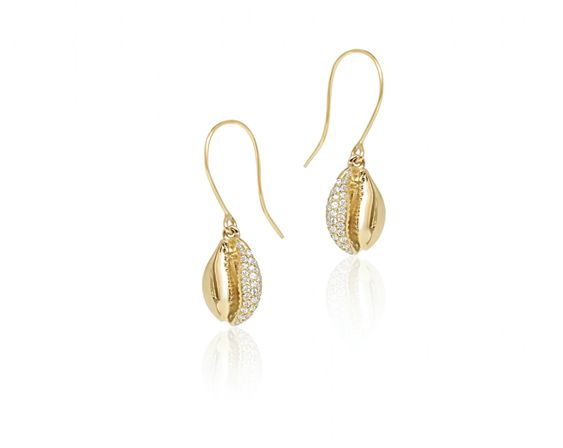 How has your life and work changed since the pandemic began in the U.S. earlier this year?

First, life, I spend more time with my husband and children, since I’m working from home. On the business side, we always relied quite a bit on online retailers. Now, we are developing and nurturing relationships with independent boutiques as well.  Before COVID, we held a beautiful series of trunk shows with a real link to the art world—with collectors, art institutions, and galleries. Because the trunk shows are not possible, physically, we’ve put them aside.  That’s where online and independent boutiques will step up. I think the independent boutiques who know their customers very well will be able to take that same curated, personal approach we had with the trunk shows.

What changes would you like to see in the jewelry industry, specifically as it pertains to the current support that Black jewelry designers are getting now, that may not have existed prior to June of this year when the Black Lives Matter movement became more prominent?

I think it’s a positive thing that editors and stylists are now becoming more curious about designers that didn’t have the spotlight. What I hope to see is more of the buying community being equally involved, because ultimately that is also important. Customers are already discerning and thoughtful about who makes their jewelry, and what narrative and history that jewelry holds. I think it’s maybe chronological, so stylists and editors first, and now we need to see what’s going to happen on the buying side. There’s some great initiatives already put in place such as the 15 Percent Pledge, so I hope there will be an impact on the buying community as well. 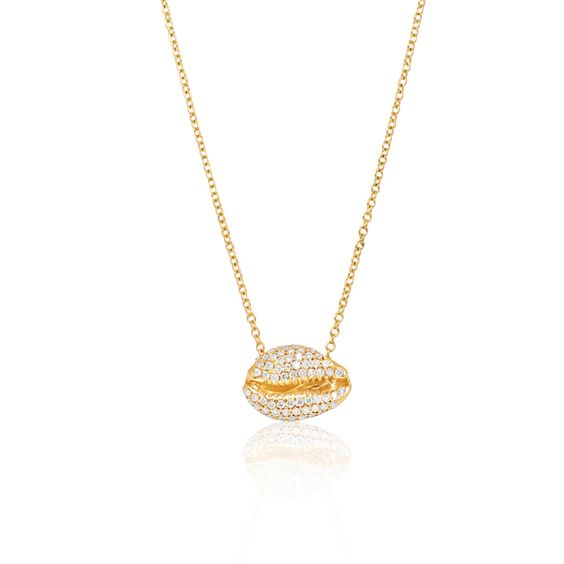 Have you seen any changes in the way that you do business since this all began?

Yes. With my background, I had relationships with editors and stylists, and they have always been attracted by the jewelry itself, so this was a positive element for us. But people are being more proactive coming to us. We would like to see that in the long term.

What is your personal favorite talisman?

The cowrie shell in my collection is a historic talisman, but I have revisited it with diamonds and gold. I like to call it my grownup talisman, because I used to wear a natural one when I was a teenager. The second one is a ring that my mother gave me. It’s a gold ring.  I always have those two with me.

And finally, do you have any news on your upcoming collections that you care to share?

Yes. The new collection will be out soon. We need to decide on a date, but it’s almost finished. I can’t wait to share it with the world. There are some of the signature elements of my designs, in terms of sculpture, shapes, curves, and circles, but I go even deeper into my exploration of commonalities across cultures. Q & A with Lauren Newton Jewelry