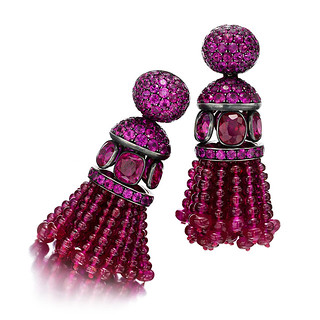 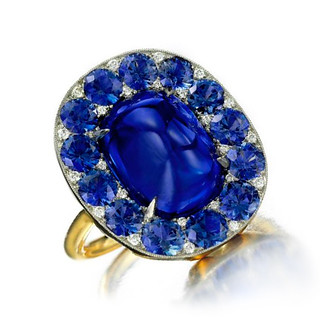 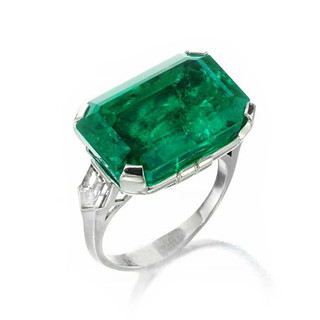 Commanding the highest per carat price of all colored stones, the finest rubies range from a vibrant red to a slightly purplish red with medium to medium-dark tones. They are a type of corundum (aluminum + oxygen + silicon), which is colorless in its purest form. Add chromium and you get the strong red hue we associate with rubies. Not to be confused with pink sapphires, which share the same species, the vibrant red of rubies separate it in variety. “Burmese” rubies are considered the finest due to their origins in the Mogok region of present day Myanmar where they form in metamorphic rocks like marble. These marble-hosted rubies fluoresce (the emission of visible light when exposed to external radiation), which adds to the intensity of its color and in turn increases its value. They are often called “pigeon’s blood” rubies.

These naturally occurring Burmese rubies stand out since almost all natural rubies today are heat-treated to improve color and/or clarity. There are also synthetic rubies on the market today, which are created using processes such as flame-fusion, flux-growth, the Czochralski/pulling method, and the hydrothermal method. Some rubies pass as such good fakes, it took months of gemology school to be able to tell the difference!

Throughout their known history, Rubies have been recognized as a gemstone of love and passion with the potential of stimulating sexual energy and desire. Additionally, rubies are known to motivate and balance while promoting courage and prosperity. A stone of royalty, it is said that the Chinese Emperor Kublai Khan offered an entire city in return for a large ruby. According to Ancient Burmese legend, inserting a ruby under the skin would ensure safety and invincibility.

Like rubies, sapphires are a type of corundum. The ruby derives its color from chromium, while the sapphire achieves its blue to violish-blue color from a combination of iron and titanium. Sapphires originate in either basaltic or non-basaltic environments. Basaltic-hosted areas, such a Cambodia, Thailand, and Australia, produce darker colored sapphires, which tend to be less valuable. The finest sapphires came from a non-basaltic environment in the northwestern region of South Asia called Kashmir. Stones were only mined in Kashmir between 1881 and 1887 due to elevation, climate, and political factors. Their “cornflower blue” color and miniscule inclusions give the stones a velvety sheen, which commands very high prices. Statistically, 95% of blue sapphires are treated to improve color and clarity. The most common methods of treatment are heating and lattice diffusion. Sapphire imitations on the market today are comprised mostly of glass and synthetic spinel. Common processes for creating synthetic sapphires include flame fusion, flux, pulling, floating zone, and hydrothermal treatment. The United States accounts for half of the natural blue sapphire market, and according to GIA, in 2010 the US imported $214 million dollars worth of sapphires!

Known as the “stone of wisdom”, sapphires can be used to stimulate psychic visions and in this vein, evoke knowledge and understanding. They help the wearer seek spiritual and personal truths while calming and focusing the mind. As a talisman, sapphires were believed to protect an individual from poison and plague while instilling the power to resist black magic.

Emeralds are my favorite of the Big 3! According to some sources, Egyptians mined emeralds as early as 3500BC. Egypt remained a key source of emeralds until the sixteenth century when Spanish travelers started mining them in Colombia. With their slightly bluish green hue and vivid saturation, Colombian emeralds are the most coveted of their kind to this day. Other sources of modern day emerald mining/production include Zambia, Brazil, and Zimbabwe. The intense green color found in most emeralds is due to the presence of chromium and vanadium, while the bluish color is caused by a presence of iron. Emeralds are mined in metamorphic rock and their most common habit (a crystal’s external shape) is an elongated six-sided prism. They are often faceted into an “emerald cut” which is a type of step cut with a rectangular or square table and faceted corners. Because emeralds are softer and more fragile than corundum, they are more susceptible to damage during the cutting, polishing, and setting processes. Almost all emeralds have inclusions that are visible to the naked eye, most commonly fractures and liquid inclusions. A fracture that is filled with oil or resin can improve the stone’s color and overall appearance. Emerald inclusions are often called “jardin”, which is the French word for garden, due to their mossy appearance.

Emeralds are a stone of courage. They are said to eliminate negativity while safeguarding one’s physical, emotional, and mental balance. They are also known to aid in the healing of heartbreak, bringing vivacity to the emotional and physical heart.