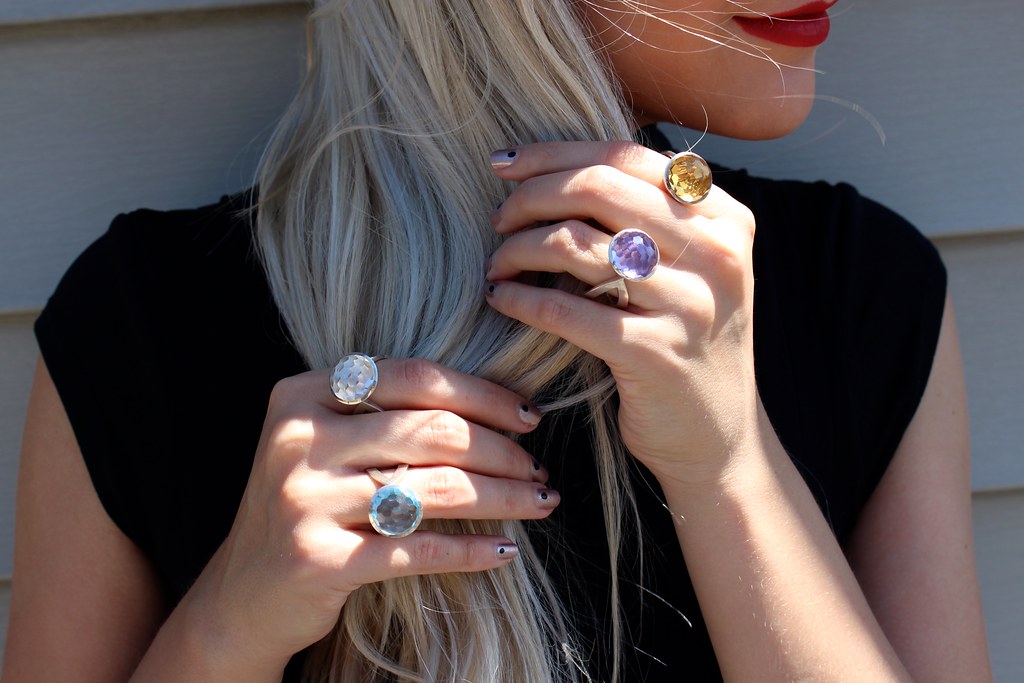 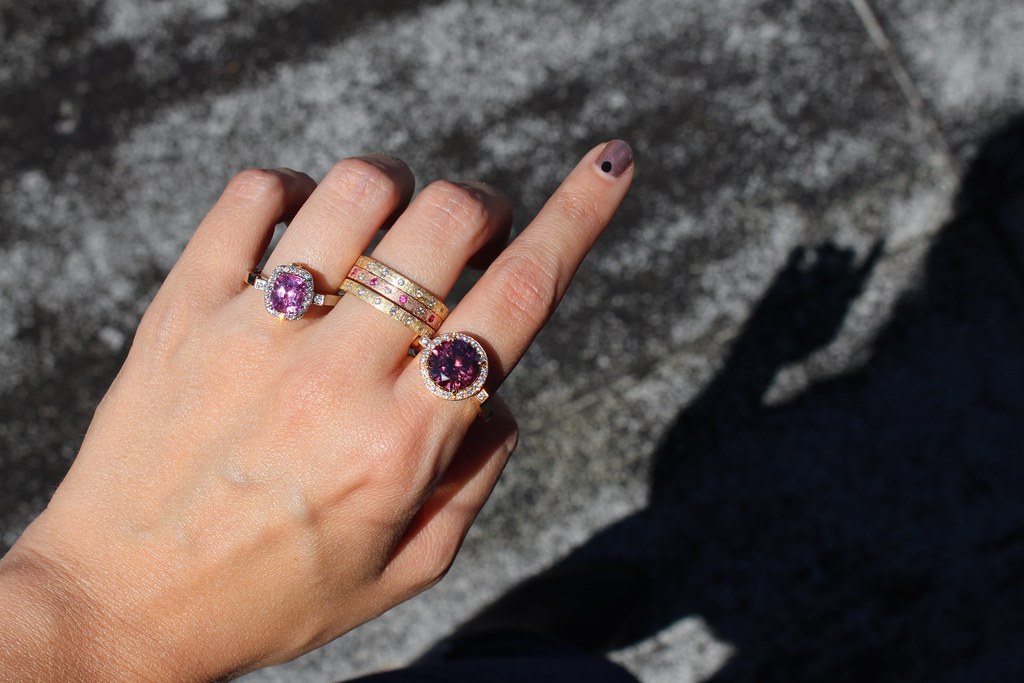 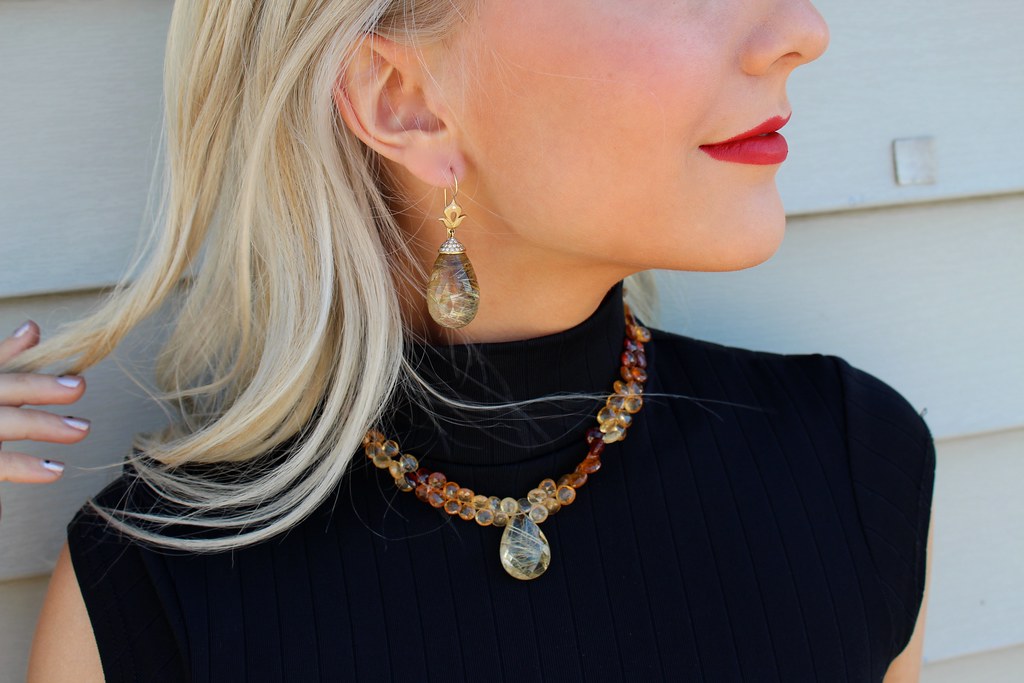 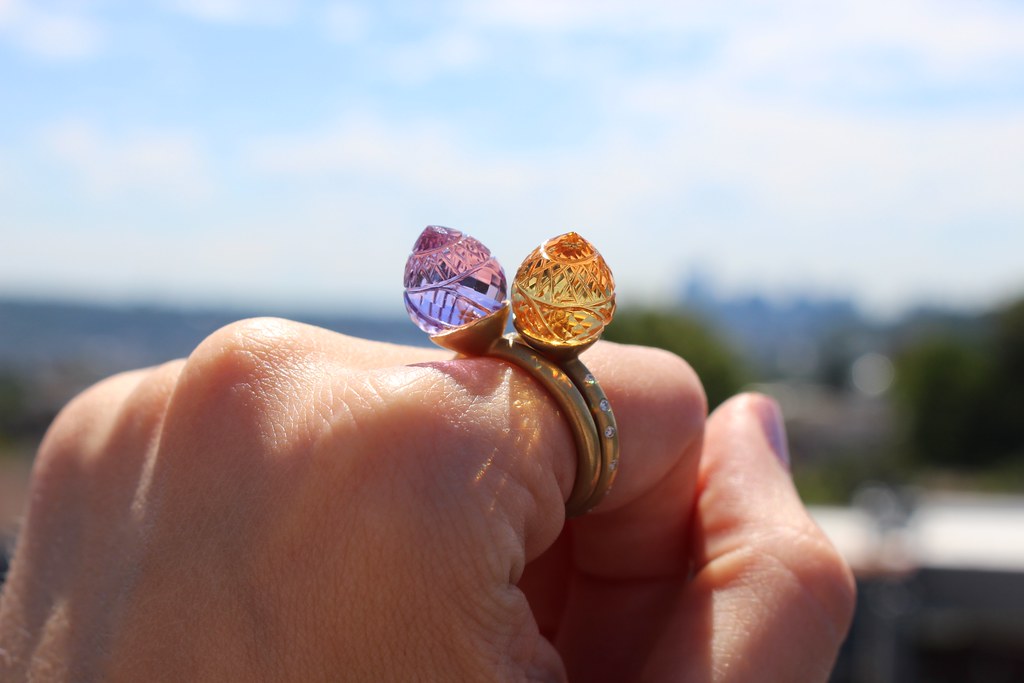 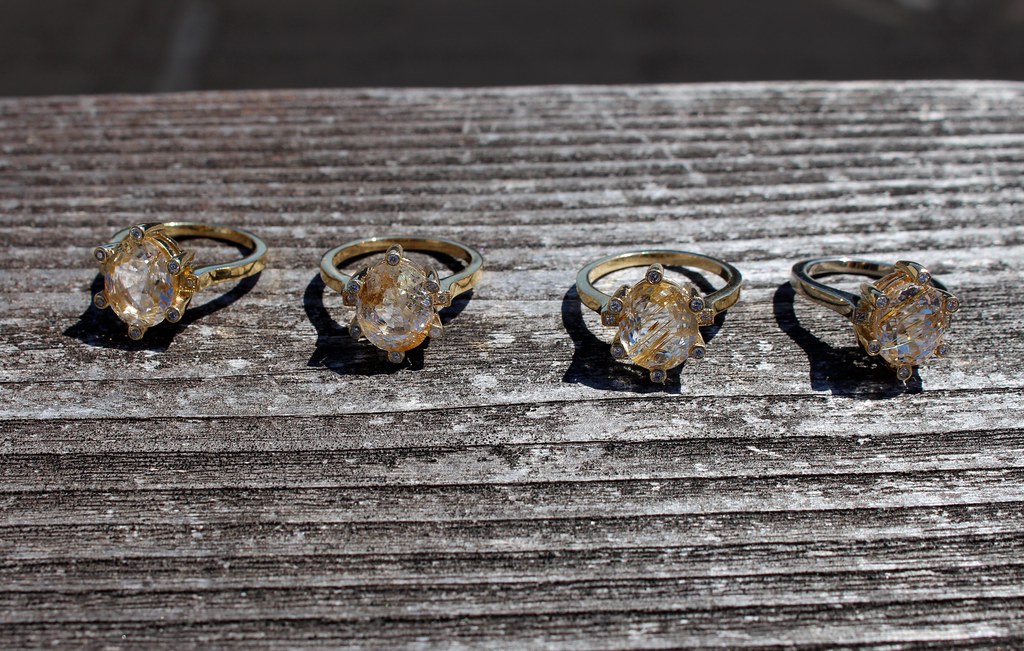 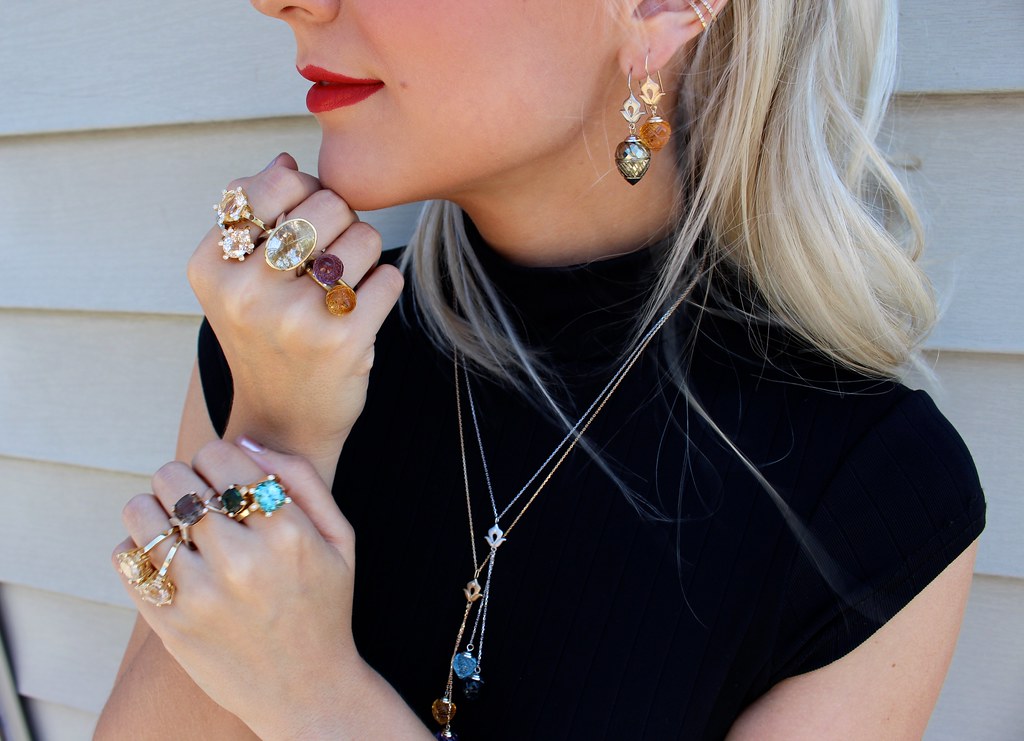 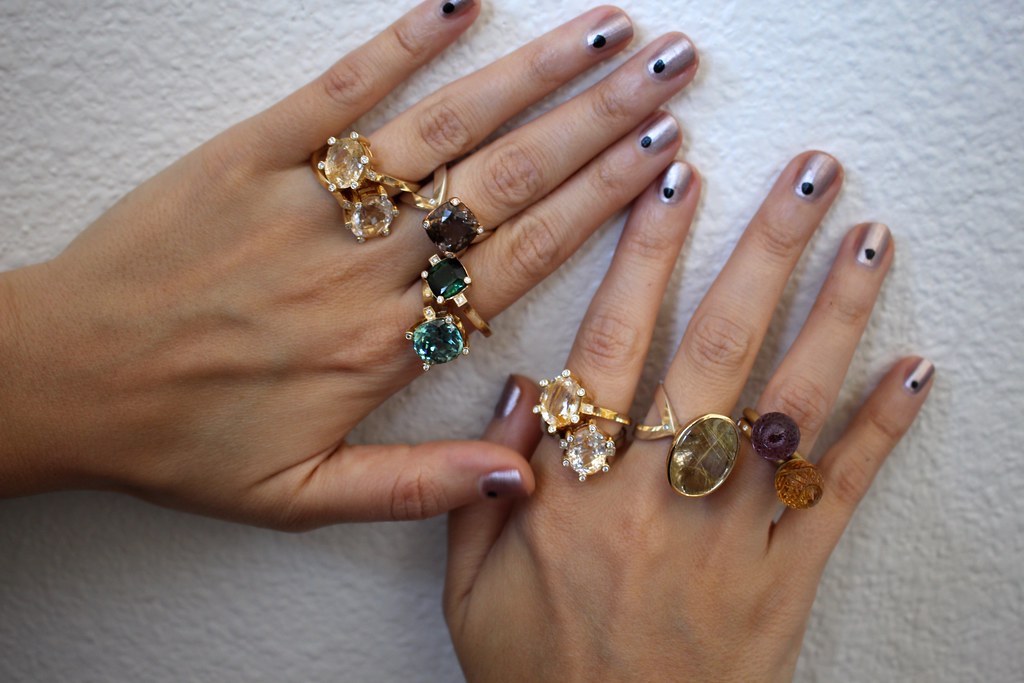 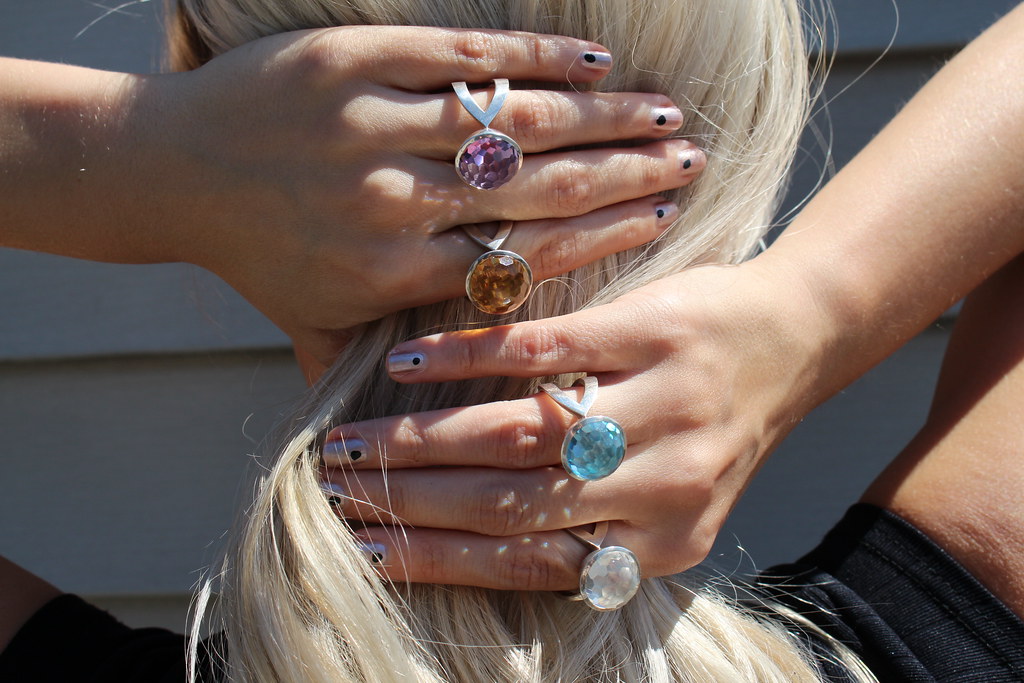 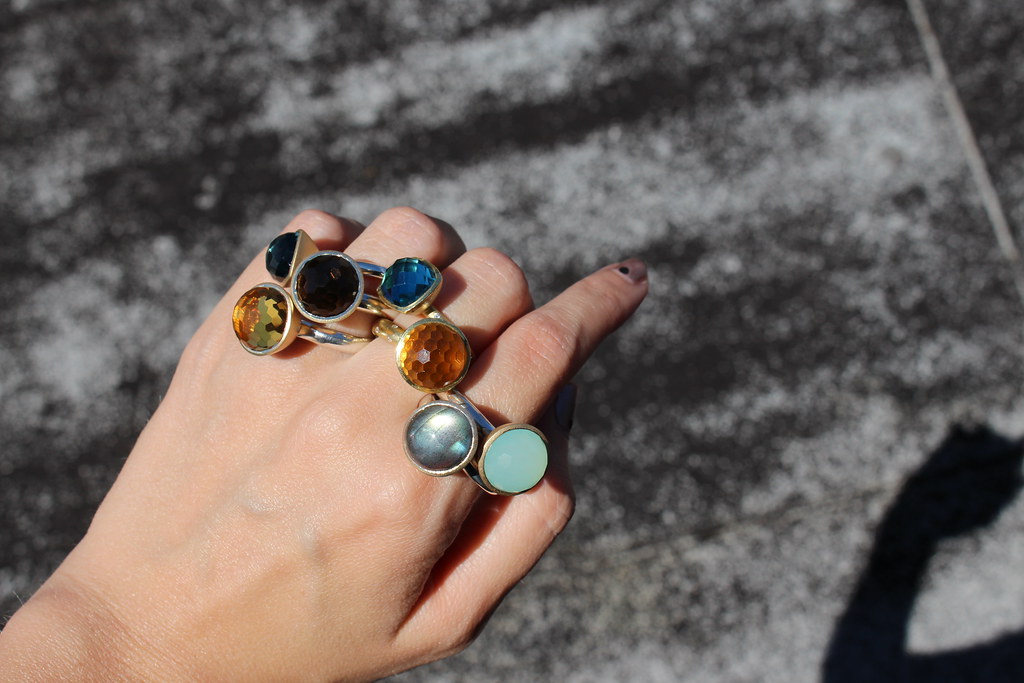 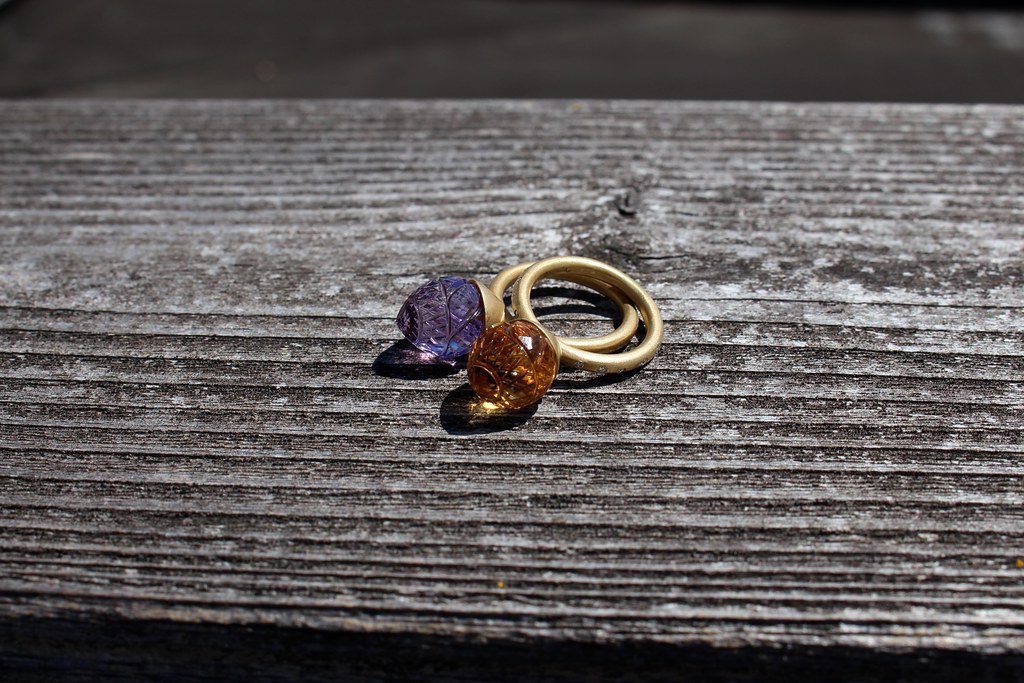 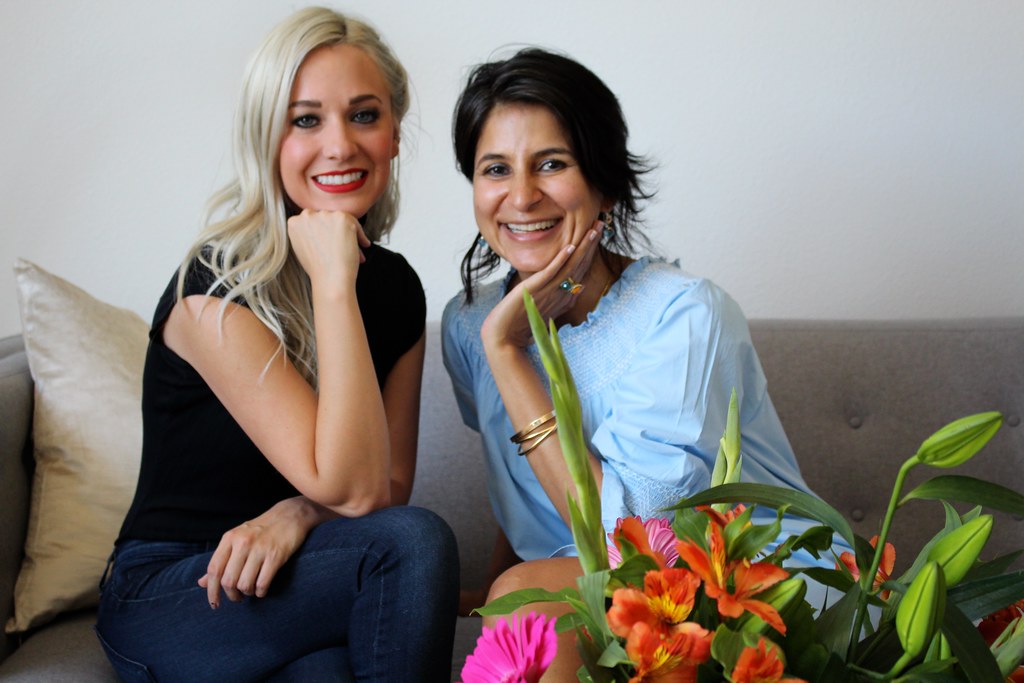 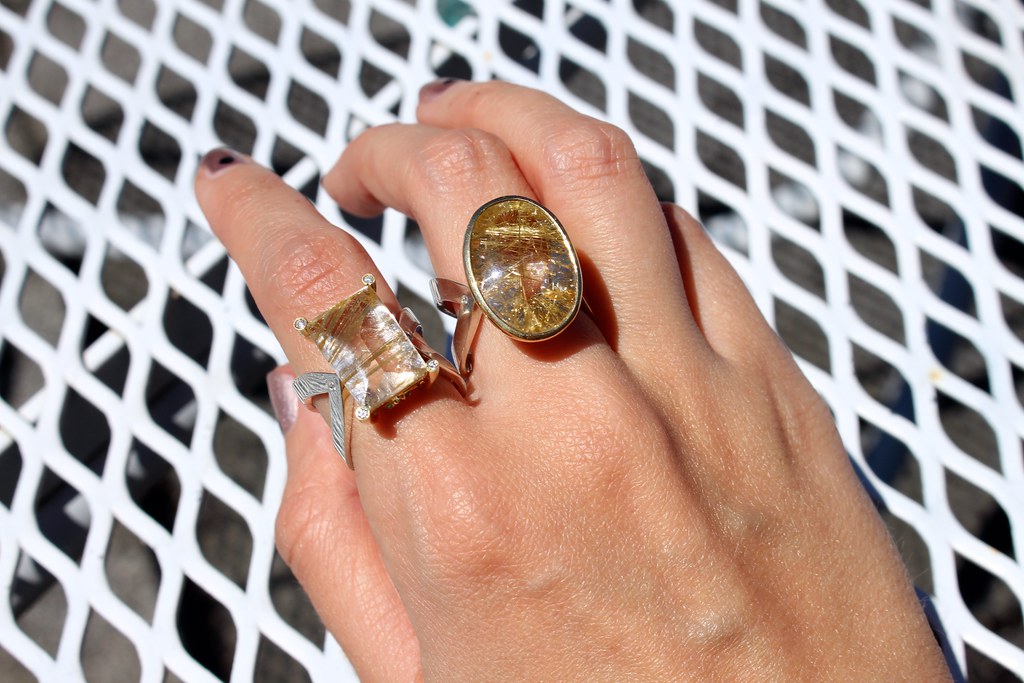 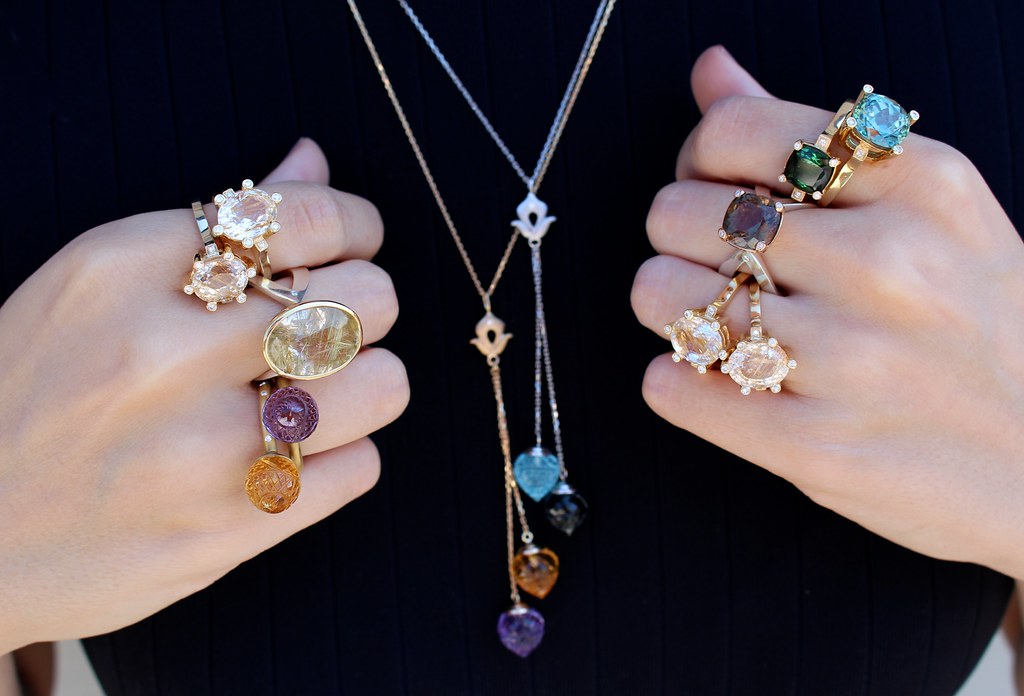 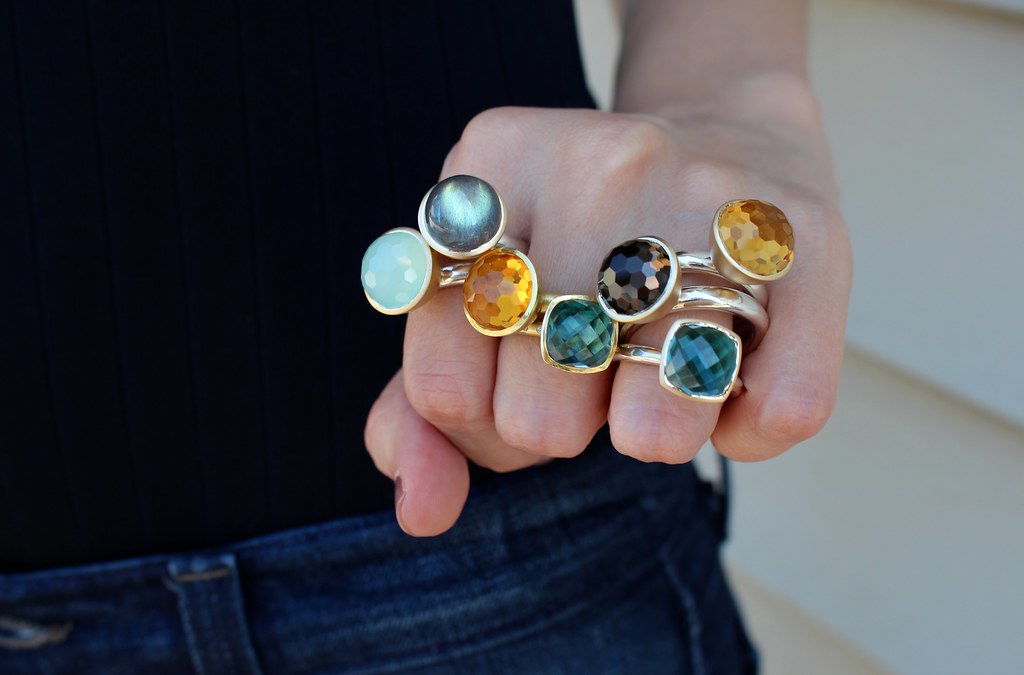 While a majority of my Seattle #JewelryRoadTrip was spent in the downtown area of Seattle, I was able to change the scene up a bit with my next visit. Shamila Fine Jewelry has called Seattle home for several years, with a private design studio tucked away in Fremont–an artsy district, where the views are captivating and the inspiration is flowing. For Shamlia, her extensive travels and worldwide thinking have shaped her collections and it is no surprise that she has clients that live all over the globe. Her customers end up being collectors and obsessed with her pieces, with the first purchase never being the last! I’ve met Shamila at tradeshows in the past but had only seen a couple pieces of her work at a time – she always wears her gold stacking rings or a cocktail rutilated quartz ring. I was so excited to not only get the chance to see her collection in its entirety, but to also catch up for more than just a few minutes with this warm-hearted soul. She is one of those types of people that you want to be around, with a contagious positive spirit!

Shamila’s background is quite interesting, she was born and raised in Tanzania, then moved to Canada as a teenager where she had the opportunity to live in both Toronto and in Vancouver, and has since called Seattle home. This however, was not before spending an exciting year living in the West Indies, where a work assignment with the UN and the WHO sent her to the Island where wonders never cease – St.Lucia! She has lived in many parts of the world, as she describes herself as “comfortable out of her comfort zone.” Her studies brought her to the University of British Columbia in Vancouver BC, where she received a bachelor’s degree in Cultural Anthropology and International Affairs. In 2009 she apprenticed for many weeks in Instanbul where she learned from the best. Seattle has been a great place to call home for Shamila, as an easy gateway for her jetset life, ideal food destination for her foodie habit, and the weather pairs perfectly with her obsession with shirt dresses!

For Shamila, designing jewelry began as a hobby about 14 years ago when she first moved to Seattle. It started off with beads from a local bead store and when that didn’t satisfy her, she began looking for bigger and better. Shamila’s drive lead her to seek out rare stones, like specially Labradorite from Madagascar. Her hobby continually grew and brought her more and more happiness than she ever thought. Keyword here is hobby, so still this wasn’t a full-time thing for her. Alas, she was at a crossroads where many passionate people find themselves—choosing what you love vs. being realistic and sticking with her day job, she vividly remembers what made her decide to put everything on the line with jewelry. She says that choosing jewelry would be, “A career that would allow me to travel the world, to find beauty in the often overlooked, to make deep and lasting connections with those I worked with, while being able to give back on many different levels.” That was it—she was choosing jewelry, and yes, this decision came right at the brink of the recession. But she was ready for the challenge and it was the best decision she has ever made.

Inspiration abounds for Shamila when designing jewelry. She says, “When I am designing pieces I am thinking about who is going to wear them, sometimes the clients are such muses, especially when they are collectors, you get to know what they love and like. Quality is of utmost importance. I like to offer luxury in the details. The weight of the piece, the curvature of the shank, the subtle polish of the metal, the way the stones are cut, and how the light reflects off of them.” Design ideas pop into her head frequently, without warning. Travel is a huge inspiration, although there is a time and a place for these ideas. There is an art to holding onto inspirations and releasing them when they are ready. I think Shamila has mastered this, especially when she says, “Creating is not linear to me. It is like a careful yet chaotic orbit of paths; I just do what feels right for the stone and for the experience I am having at that point in my life.”  All her designs are proudly handmade in Seattle. Having everything created locally is extremely important to Shamila and her objective, as well as keeping everything as ethically sourced as possible.

One thing I love so much about her designs is how she showcases the gemstone’s beauty above all else. A rutilated quartz is poised gracefully within a setting, while a labradorite is captured ideally to show off its unique labradorescence. Shamila loves using gems that are specially cut, which takes her collections to a whole new level.

Speaking of specially cut gemstones, her carved citrine and amethyst minaret stacking rings are what dreams are made of! A week later and I’m still thinking about them. If you’re unfamiliar with what a minaret is, it is found in Islamic architecture and is a distinctive feature, where prayer is called out–oftentimes similar to a tower. Shamila’s Lokum Lale Luxe collection features these minaret carved gemstones in different styles, not just rings!  I’m wearing a few in the photos above, like the lariat necklaces and dangle earrings. I especially love the variety of gemstones that this carving style comes in–like Pyrite?! So amazing to see pyrite not only used in fine jewelry but carved into a shape like that. Other stones besides the citrine and amethyst include lapis, turquoise, black spinel, lemon quartz, London blue topaz, smokey quartz, chalcedony, rose quartz, carnelian, rock crystal quartz and green onyx.

Another collection that blew me away, Shamila’s stacking rings made of specially cut gemstones–round and square checkerboard, honeycomb and rosecut faceted stones. Pops of color are huge for accessorizing and these rings are ideal to pull off some colorful looks.  These rings are the kind you just can’t have one of, so the more the merrier.  I’ve stacked several in the photos above. They are so fun to wear and have a loyal, local collector base! Want something unique and gets people wondering, “What kind of gemstone is that?!” Then you HAVE to check out her Flèches d’Amour collection which uses rutilated quartz and rutilated topaz. Not many gemstones feature inclusions that make them even more beautiful than they already are!  These gemstones are so unique and Shamila does a great job of enhancing their beauty!

I want to thank Shamila for welcoming me into her design studio and allowing me to learn about her as a designer, while experiencing her jewelry first-hand.  I hope you are now familiar with her work if you weren’t already–and if you’d like to get a chance to see her designs in person yourself, she has many upcoming shows where she exhibits.  Like this Saturday & Sunday in Glencoe, IL at the Glencoe Festival of Art…as well as August 13th & 14th in Los Gatos, CA at Los Gatos Fiesta de Artes. Be sure to continually check back on the EVENTS page of her website or sign up for her jewel-laden newsletter to know before anyone else! More dates, especially during the holidays, will be announced soon. 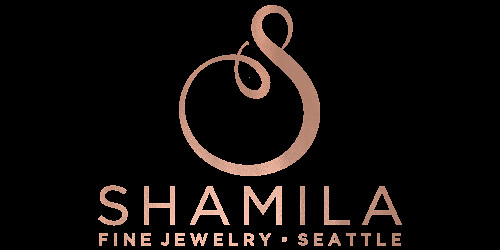