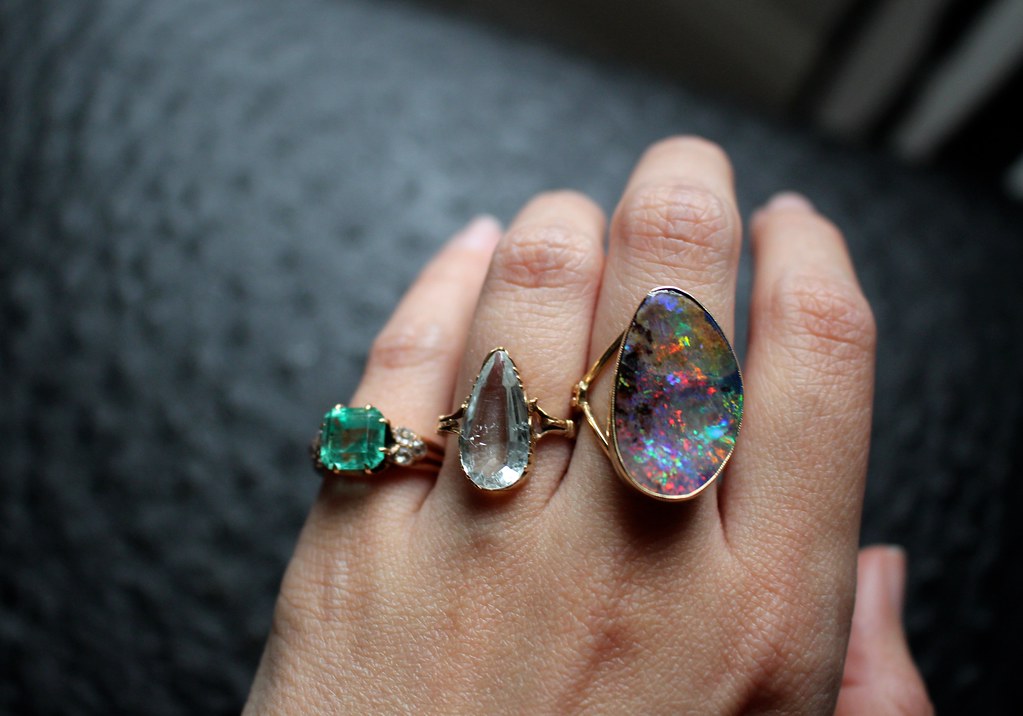 The above gemstones are all beautiful, but which would make a great engagement ring and which two are bad choices for an everyday wear piece?

Alternative engagement rings have been popular long before Princess Diana (and subsequently Kate Middleton) donned a blue sapphire. In fact, diamonds weren’t commonly used in engagement rings until the early 20th century. Stones were picked based on birthdays, symbolism, and what color was in-vogue at the time.

While it can be exciting to imagine an engagement ring with mystical and trendy stones like opal and moonstone, these gemstones actually make terrible engagement rings. So terrible that you might find yourself sulking over a ruined ring with a stone that has been chipped and gouged beyond repair. Don’t say I didn’t warn you.

Why Won’t Some Gemstones Work?

Even though I don’t recommend wearing your rings ALL the time, most engagement rings are worn nearly every day. Even if you are the gentlest person on the planet, your engagement ring will always be subject to potential damage. Some stones simply shouldn’t take that risk because the gemstone may not be hard enough to handle even the slightest impact.

Every gemstone has a hardness factor, which basically tells us how much bumping and scraping a gem can take before it becomes scratched or damaged. This hardness is ranked between 1-10 on what is known as the Mohs Scale of Hardness. In theory, the higher the number on the Mohs Scale, the harder and more durable the gemstone is. There are exceptions to this rule, but generally, the lower the number, the more you shouldn’t use this stone as an engagement ring.

How Does the Mohs Scale Figure Out Hardness?

The best way I can think to explain this is exactly how I learned it in my Geology 101 class my Freshman year of college. Let’s see if you can follow, and for those of you that already know this, bear with me. The Mohs Scale ranks a gemstone’s hardness by whether or not it can be scratched by other gemstones or materials. If the gemstone being scratched shows a mark or abrasion, it is softer than (or equal to) the material that scratched it. If the hardness is equal, the gemstone that was scratched should also be able to effectively scratch the material that scratched it.

Since diamonds are ranked highest on the Mohs Scale at a 10, they should essentially be able to scratch every other gemstone’s surface.

Why Diamonds are Forever

One reason diamonds are so prized for engagement rings is because of their rank on the Mohs Scale. At a 10, diamonds are the hardest substance known to man. In fact, no other gemstone comes close to this hardness factor. This doesn’t mean diamonds are indestructible (more on this in a future post), but it does mean that it is much more difficult to damage a diamond than say a garnet that ranks between 6.5 – 7.5.

What Stones are the Absolute Worst for Engagement Rings?

Not to dissuade you, but if a gemstone makes this list, you’ll really want to rethink your strategy before using it in an engagement ring. That’s not to say you couldn’t. Some of these stones are significantly less expensive than diamonds, so if they become damaged, they could easily be replaced.

A word of warning though — take extra care not to get sentimentally attached to the stone itself, since you might be forced to replace it someday. You could also opt to not wear the ring every day. Save it for special occasions and wear your wedding band instead. There are no engagement ring rules stating you have to wear your ring seven days a week, and who says you should only have one!

But, regardless, these gemstones will make the worst non-diamond engagement rings:

All hope is not lost if you’re set on using a gemstone other than a diamond for your engagement ring. Even though most of these gemstones aren’t as durable as diamonds, they will stay in great shape for a lifetime as long as you take proper care of your jewelry.

Here are some of my favorite alternative engagement ring stones:

There are so many other gemstones not listed here and other factors that affect durability, too. But this guide should at least get you started. Remember to always look up a gemstone’s hardness on the Mohs Scale. If it ranks below a 6, do a little more research and weigh your options. Good luck and happy hunting!