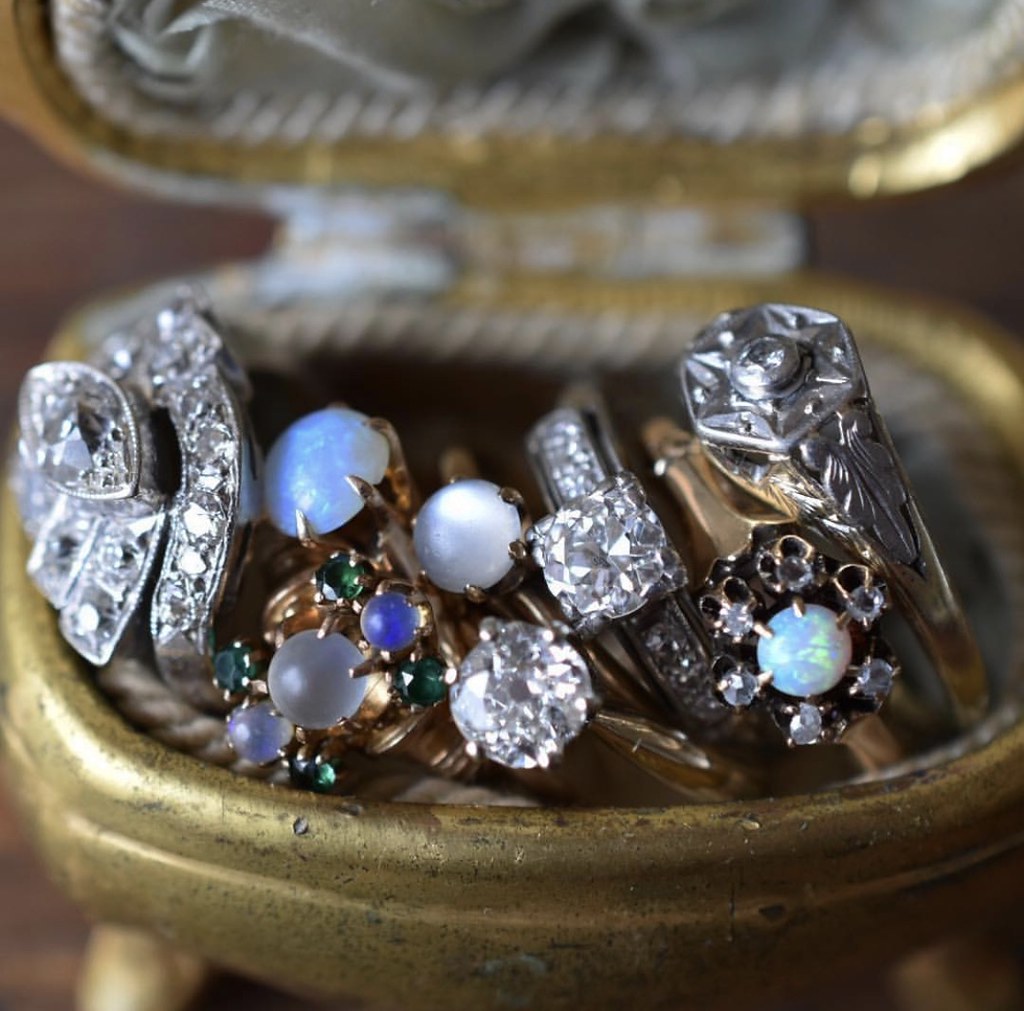 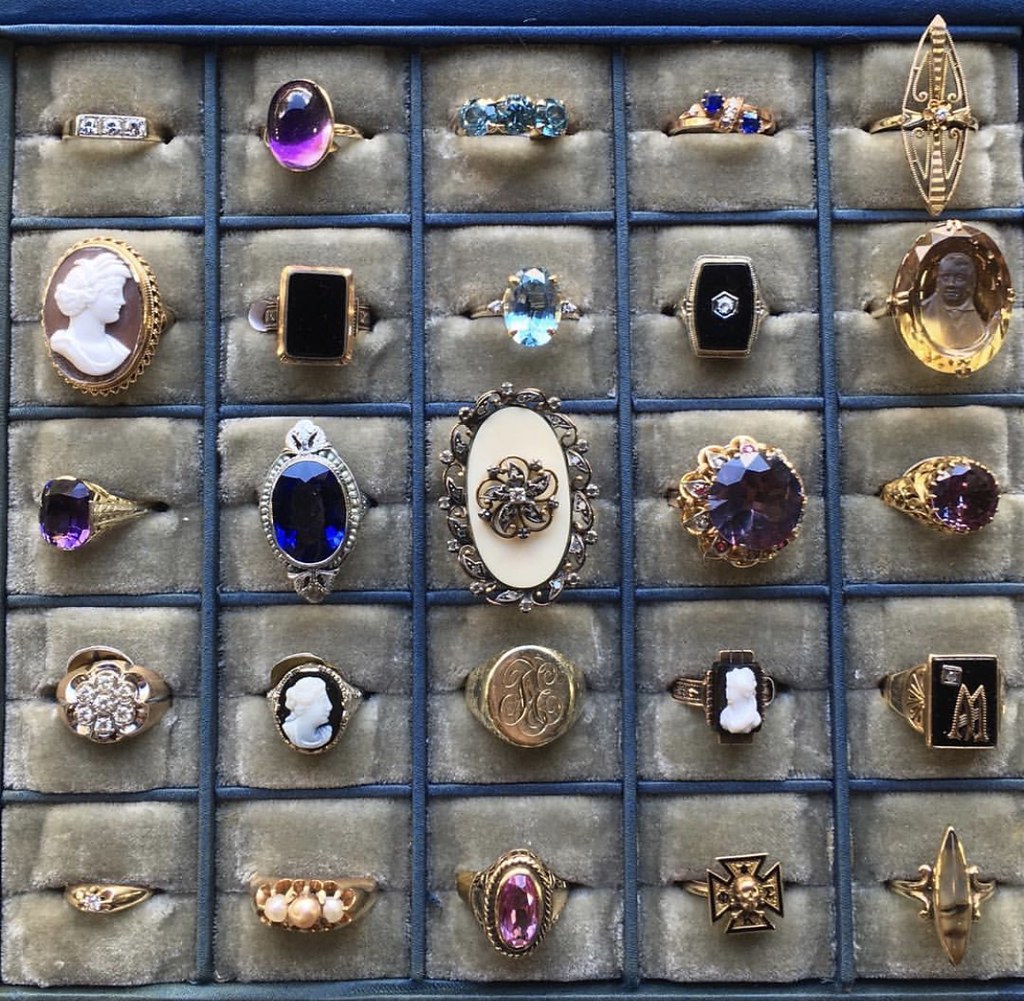 I’ve enjoyed following The Rusted Anchor for a few years now on Instagram and I feel like I’ve watched them grow from the beginning! Katie and Andy are a husband and wife team who started with a love for antique jewelry and collecting it personally. They never thought they would turn this passion into a business, but now with over ten years doing this, they wouldn’t change it for the world. I’ve always felt a connection with them because they used to live in Buffalo, NY–not too far from where I grew up. They are now based out of Rhode Island and set up at Brimfield (the best antique flea market in the US).

I recently interviewed them and I know you will enjoy:

Katie: When I was about 7 I became obsessed with getting my ears pierced but then when it came down to it I chickened out twice and two of my aunts have extra holes in their ears because of it. Eventually I mustered up the courage and followed through, but then little league and playing outside with my brothers became more important and my interest in jewelry was put on hold until I met Sarah Blawat of Sarah’s Vintage & Estate Jewelry. I started working in Sarah’s antique jewelry store when I was 19 and that is when my love and appreciation for jewelry, specifically vintage and antique, really began.

Andy: I remember being like 10 or 11 and I noticed my Uncle Vic wore a gold watch; an Omega with a brick bracelet, it really caught my eye, he was always flashy, a gold bracelet, a gold watch and a huge buttery gold Latvian ring. I knew then that I was going to wear a lot of jewelry as an adult. 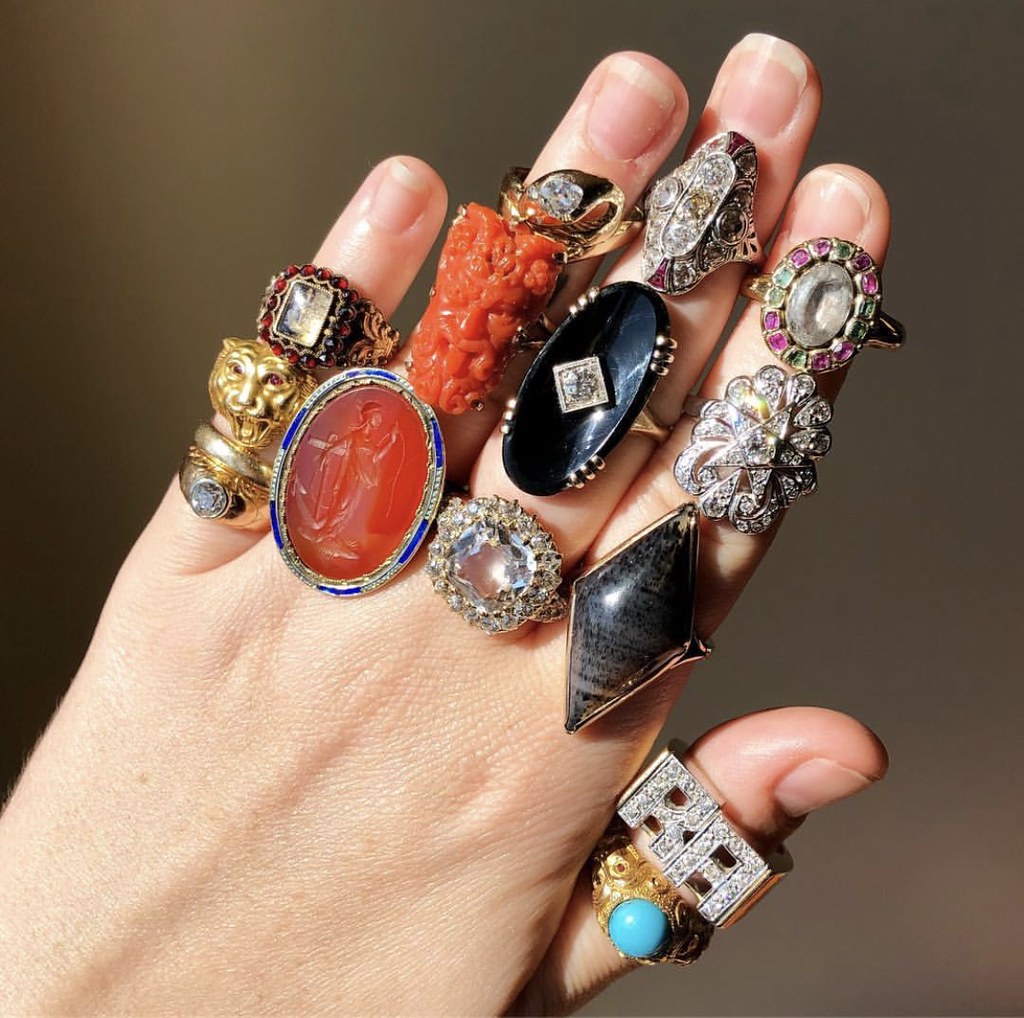 Andy: We collected for ourselves for a little while and thought it would be fun to buy something specifically with the purpose of reselling it. I remember the day really well. We were poking around a Salvation Army store in Buffalo, New York and found a sterling silver scrimshaw men’s ring that we both liked. It was $15. We purchased it, put it on eBay, and sold it for $45. Then we took that money and rolled it into a collection of Bakelite bangles that we found at a flea market in Buffalo, that is no longer there, and sold the collection to a collector/dealer that we knew. The rest, as they say, is history. That was about 12 years ago. 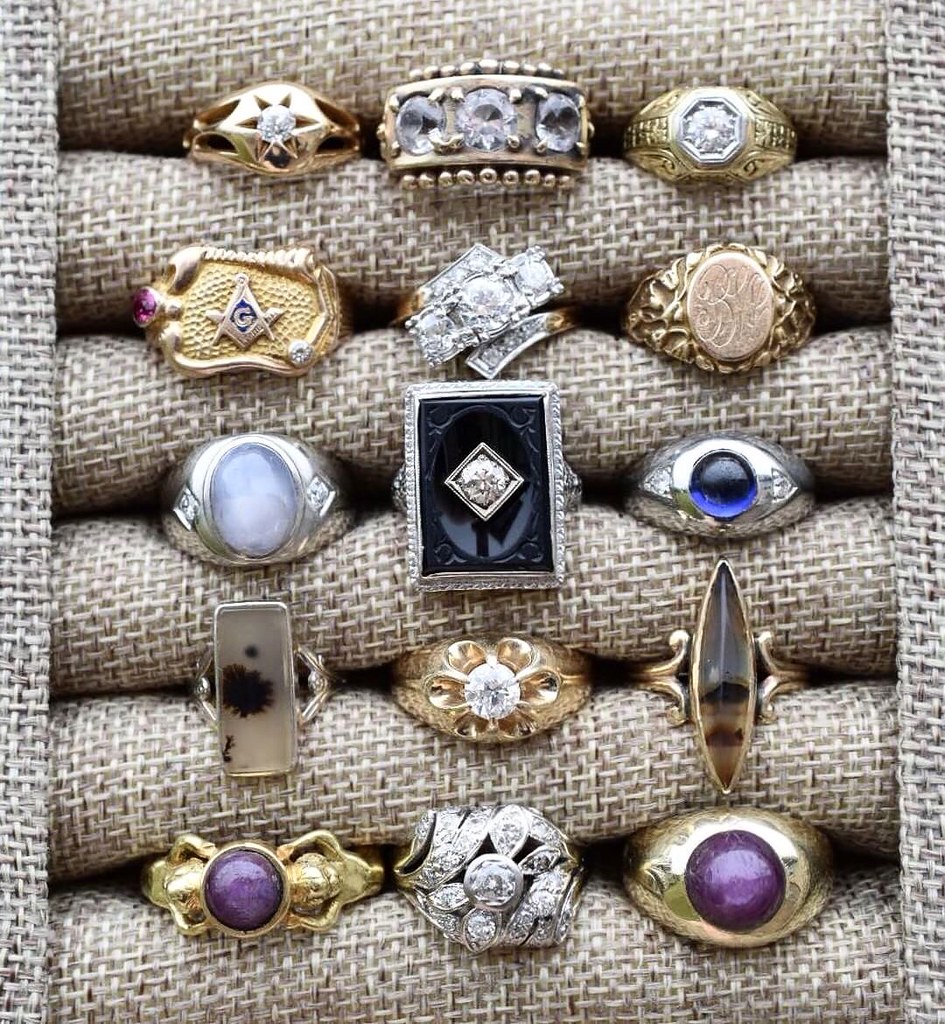 We began this as a hobby about twelve years ago when we first purchased that scrimshaw ring. About 8 or 9 years ago we started to take a more serious approach and that’s when we named the business. The name “The Rusted Anchor” was a collaboration. We were still living in Buffalo at the time and Katie really wanted to incorporate something from her coastal upbringing into the business name. The anchor is on the state flag of Rhode Island, where Katie was born and raised (mostly), and it is a symbol of hope and steadfastness. The word “Rusted” was Andy’s contribution. Rust after all is the result of oxidation, a form of patina, a sign of age. We thought it had a nice ring to it. In the years since, we left Buffalo and moved to Rhode Island where Katie attended law school. We’ve grown the business bit by bit and we feel really lucky that every day presents a new opportunity to learn and grow. 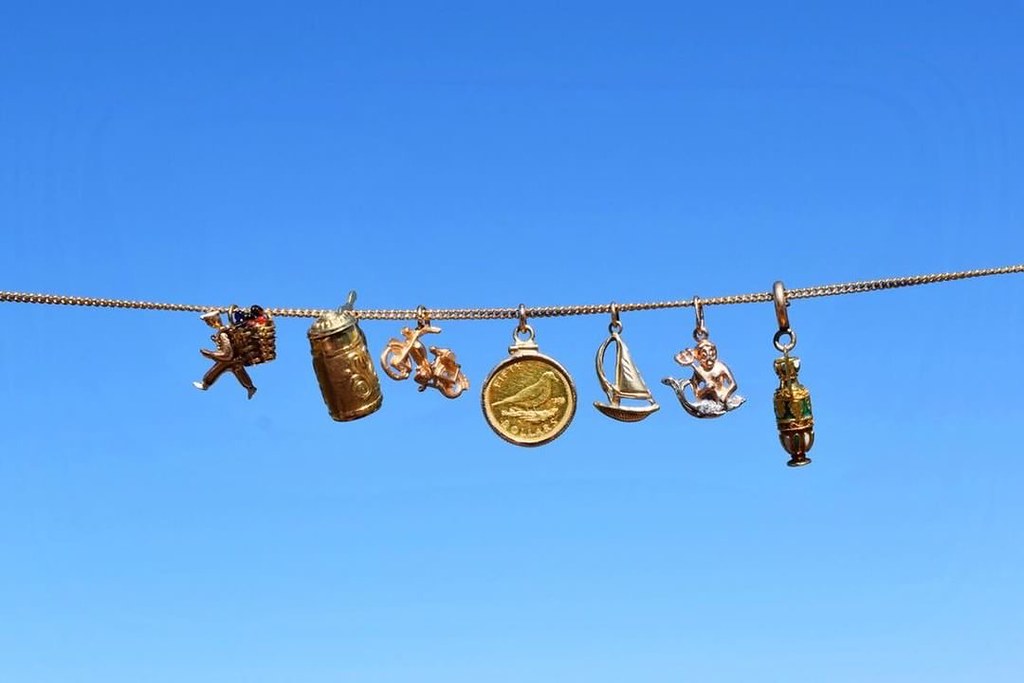 Katie: Honestly, every piece is fun for us to acquire and every single piece has a story. The first piece that comes to my mind, though, is an Art Nouveau signet ring with nude figures on the shoulders that I bought for Andy at the September 2017 Brimfield show. We both spotted the ring separately at a booth in the Central Park field. This particular dealer is not the most friendly person and she has the mouth of a sailor (which I personally get a kick out of). Andy tried to work with her but they weren’t able to come to an agreement and he came back to the booth a little disappointed. I went out on my own to shop the fields and decided to pop by the woman’s booth. She and I hit it off and she began telling me the story of a man who was interested in the ring earlier that day—she was telling me about Andy. We were able to agree on a price and I bought the ring and surprised Andy with it later on. We really look forward to the Brimfield shows every May, July, and September, not just as another outlet to sell, but also as a way to source new objects for the shop and our personal collections, also, the community of dealers there is unlike anything else we’ve experienced. 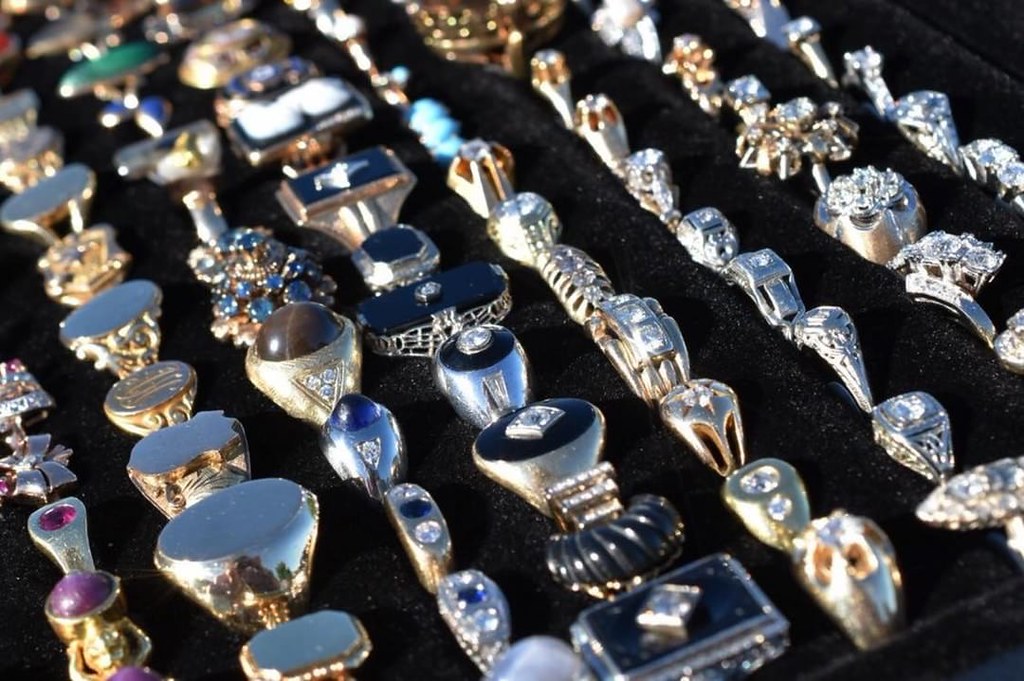 There have been so many great pieces we’ve had the privilege to own and sell it’s really hard to narrow it down to just one or even a few. I know it may sound a bit corny, but we’ve thoughtfully chosen every piece we offer for sale so every time someone chooses something that we curated it’s meaningful to us. Even the simple gold bands we stock are special sales, because often times they end up being purchased as a wedding bands which is always really flattering and exciting. 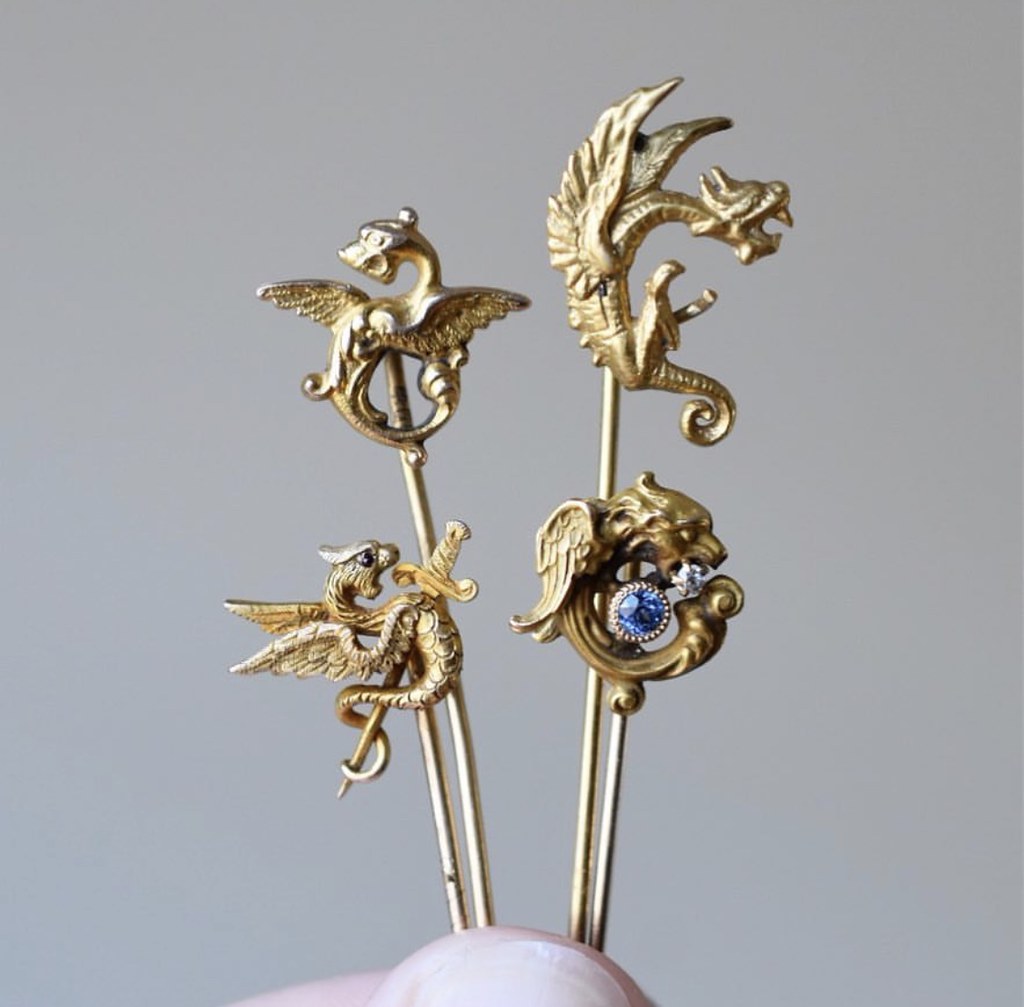 Katie: It changes, but if I had to pick one, it would be my original engagement ring. It is Edwardian with a platinum top and yellow gold shank set with diamonds and sapphires.

Andy: My favorite piece is a fairly recent acquisition, an art nouveau three stone diamond ring with carved owls on the sides. 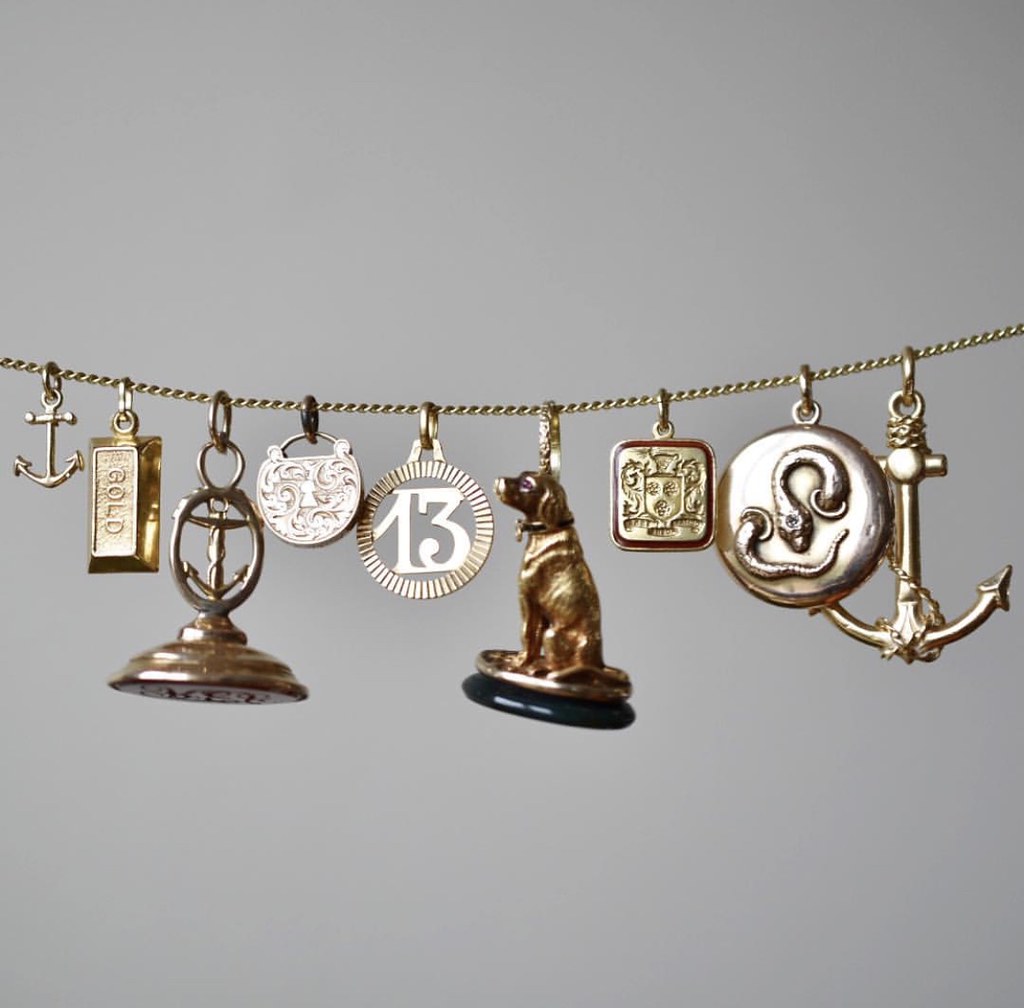 Q & A with Temple St. Clair