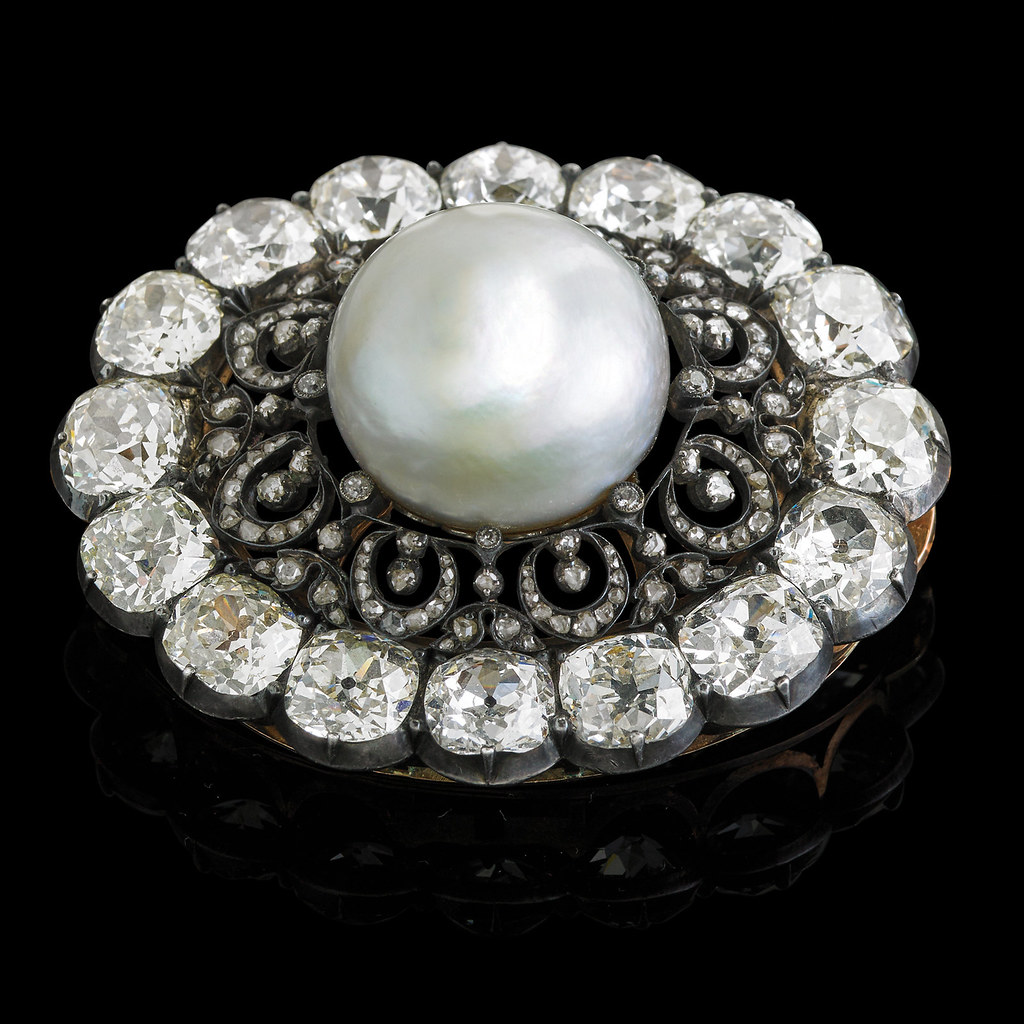 On December 7, 2014, Rago Arts and Auction Center will auction the largest near-round natural saltwater pearl discovered to date. It is the central element of a brooch described by Sarah Churgin, who directs the Jewelry department at Rago, as “a pearl the size of a quail egg on a cracker of diamonds.” We now refer to it as the Putilov Pearl Brooch.

About the Putilov Pearl Brooch

The 19th century oval brooch onto which the pearl is set measures 2″ x 1 5/8″. It is framed by 16 near colorless old mine cut diamonds , approximately  28 carats total weight, in cutback collets, and by numerous smaller rose cut diamonds set in silver topped gold.  Detachable pin findings orient either horizontally or vertically.  The frame bears the unrecognized scratched marks KAM and N677. It weighs 19.7 pennyweights.

History of the Putilov Pearl Brooch/Origin of the Name

Using family records and public research tools, Sarah Churgin and Katherine Van Dell, a jewelry specialist at Rago, have reconstructed the history of the Putilov Pearl Brooch back to the early 20th century.

Alexei (also written as Alexey, Aleksei and Alexis) Putilov, a Russian financier and industrialist, brought the brooch from Russia in the spring of 1918, crossing the Soviet-Finnish border and proceeding to Paris. Putilov had been a powerful man in Russia prior to the Revolution, connected in business and government circles, both in Tzarist Russia and Asia. His family founded the Putilov Metal Works Company, a major supplier of railway products for the Russian government and artillery for the Imperial Russian Army. Historians cite strikes at a Putilov mine in February of 1917 and a subsequent speech delivered at the mine by Lenin as events that contributed directly to the Russian Revolution. After the Revolution, Lenin himself signed a decree confiscating all Putilov’s real and personal property. Putilov fled Russia. He resumed his banking career in Paris under a Gallicized name.

The consignor is the great grandchild of Putilov and his wife, Vera. Her surname is Anglicized. The brooch was inherited by her mother, who was born and reared in France and emigrated to the U.S. in the 1950s. It is family lore that this pearl was part of an earlier necklace.

The Putilov Pearl brooch did not come to the auction house directly. It arrived through the offices of an honest jeweler. The consignor brought him the brooch to raise family funds for elder care.  While he did not know the true value of the piece she placed in his hand, he saw that it was exceptional. Rather than take advantage, he directed them to Rago. Believing that the pearl was natural, the Rago jewelry department had it certified and then derived the provenance described.