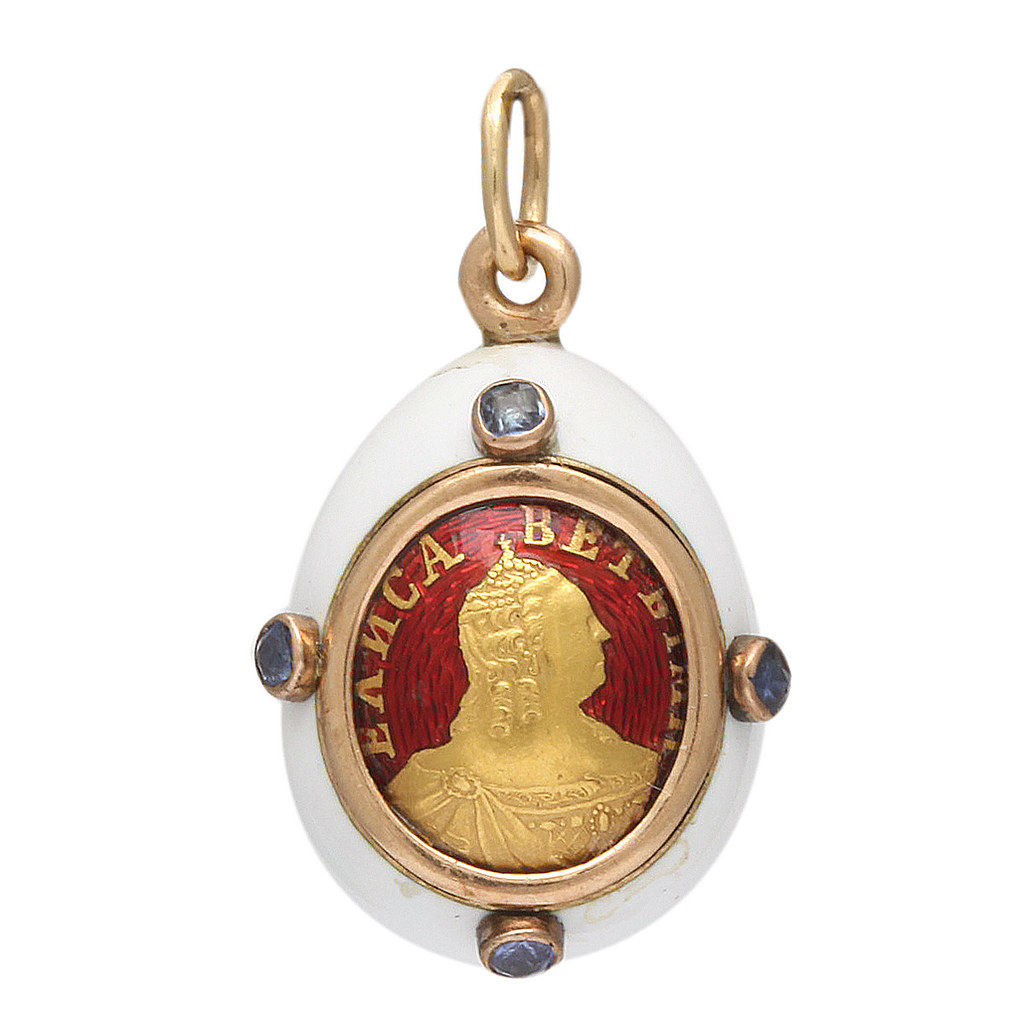 Miniature white enamel egg set with a red enamel coin of Elizabeth I and four cushion-cut sapphires. By Fabergé, ca. 1895. 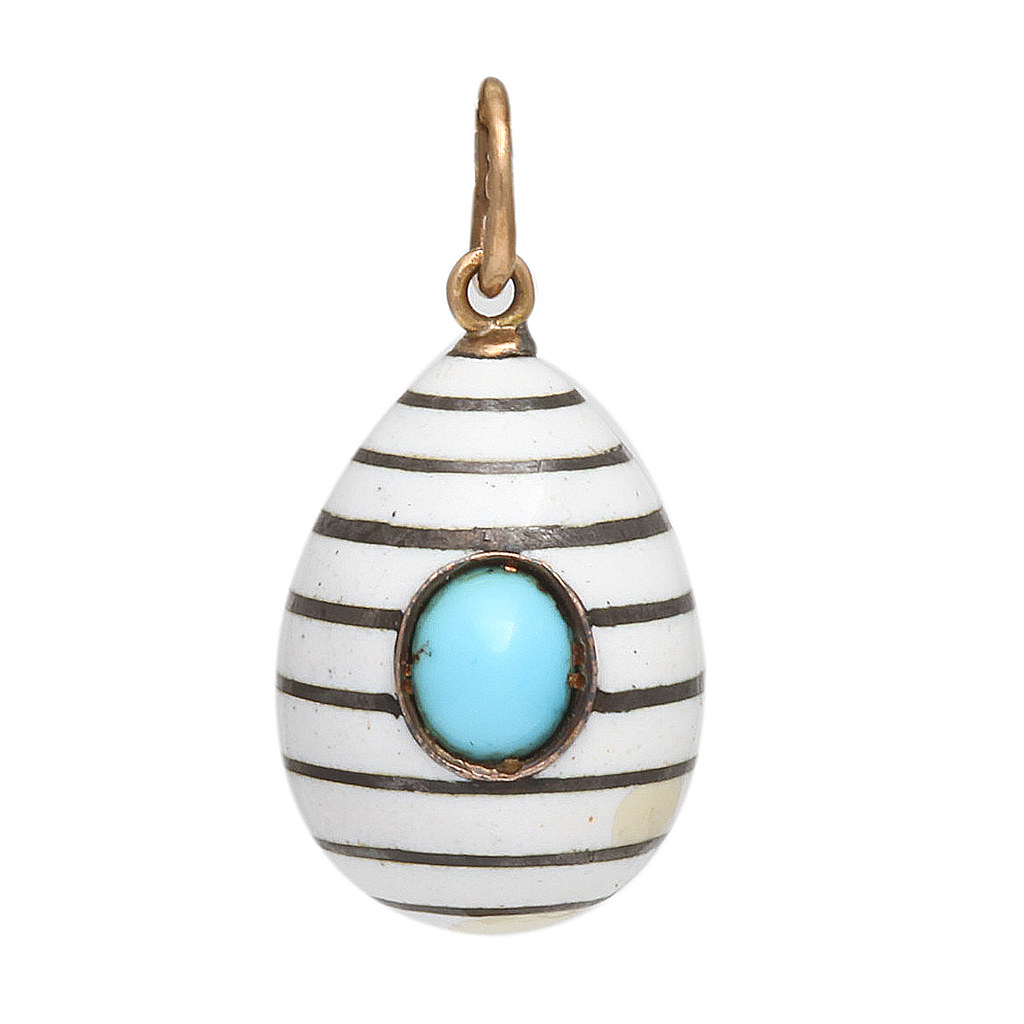 Miniature egg with white enamel stripes and set with a turquoise. By Fabergé , workmaster A. Hollming, ca. 1900. 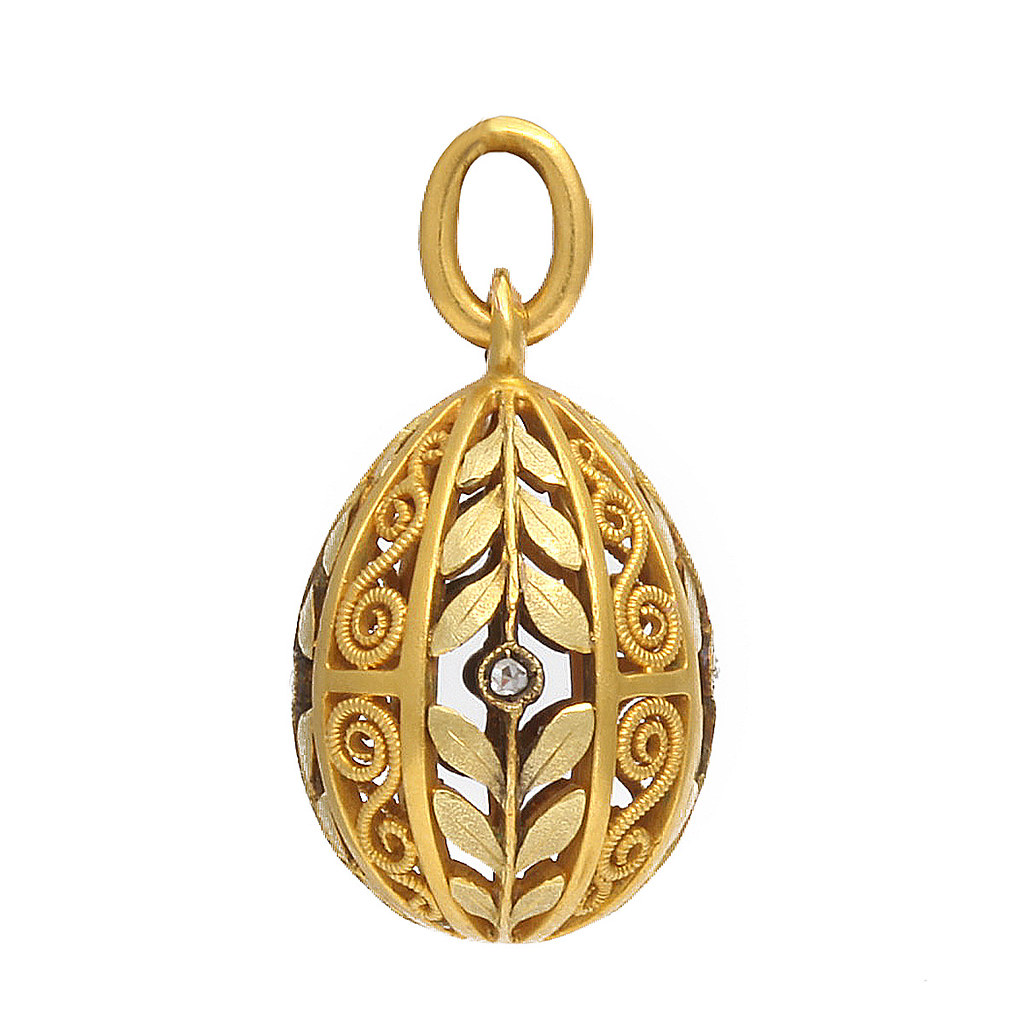 A jouré yellow and green gold egg, punctuated with rose diamonds around the center. By Fabergé , workmaster A. Hollming, ca. 1900. 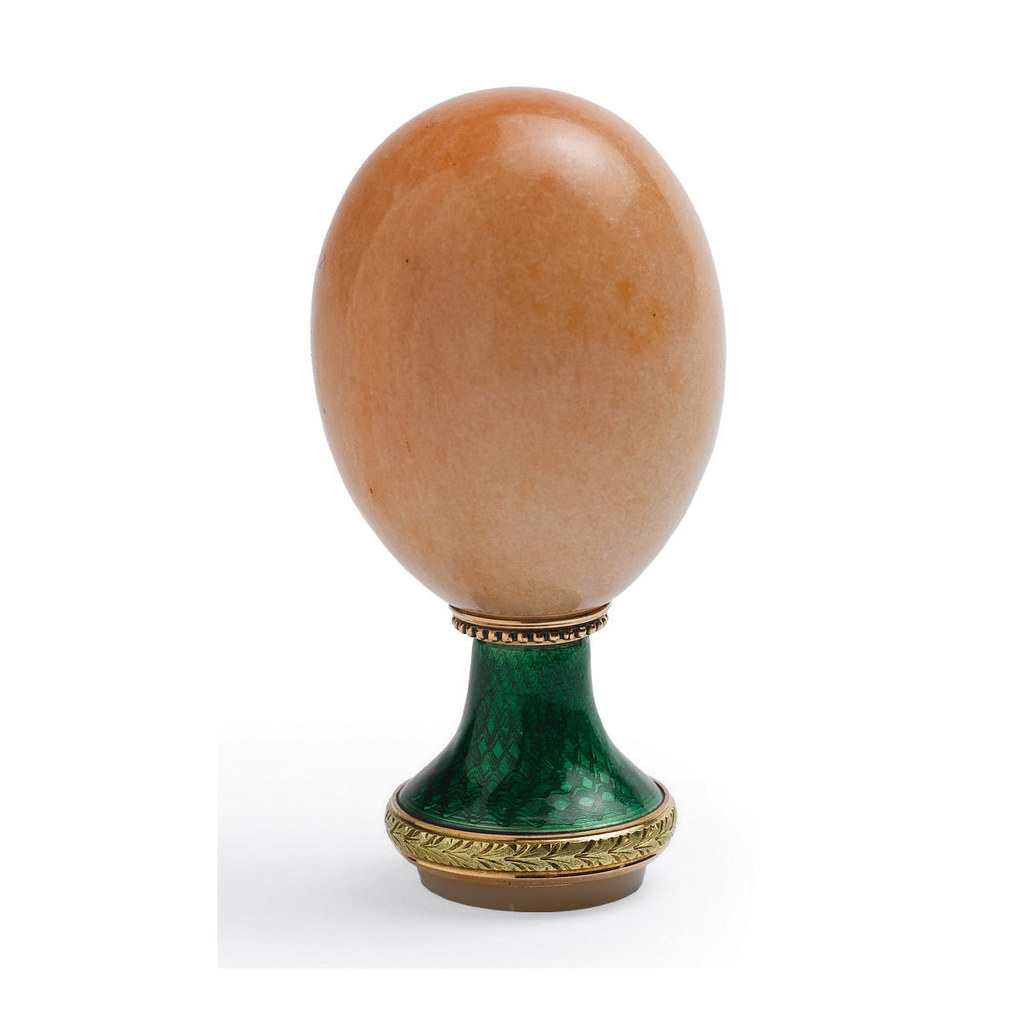 Legendary Fabergé eggs–eggs so popular, that almost everyone knows what you’re talking about when you mention their name. For me, these were my first obsession above all other types of jewelry. I remember going to my local public library and wanting to check out a book on making crafts out of egg cartons–I saw the recommendation on Reading Rainbow!  Instead, I found my way to a book on Fabergé eggs and was infatuated. In fact, for the first time in my life, I loved the book so much I never returned it. I didn’t care it was wrong because this book lit up my life!  My second run in with Fabergé eggs happened when I was in high school. I became obsessed with watching Joan Rivers on QVC and admired her love of Fabergé eggs. Back then, she had created her own jewelry line with bundles of three eggs per chain of her own miniature versions of “Fabergé eggs.” I ordered my first trio of eggs and was hooked.  I can’t remember how many I collected over the next few years, but after graduating college, I was able to pay for my trip to study abroad from selling my Joan Rivers Egg Collection. It was quite a few. I honestly wish I still had those eggs, but I wouldn’t trade my overseas experience for anything!

It is no myth that Fabergé eggs are enchanting, often mysterious, and full of intrigue.  If you were married to a Russian tsar, the ideal Easter gift would be a Fabergé egg designed by none other than Carl Fabergé himself. The first ever Fabergé egg was made in 1885 and presented to Alexander III. Since then, it varies as to how many are apparently out there, but some sources say 65 Imperial eggs were made, some say 50, some say 52, but it is known that only 43 have survived–there is a really comprehensive table that describes each, citing where the egg is now. A few are cited as “Lost” and it is with lots of hope that they will be recovered someday. 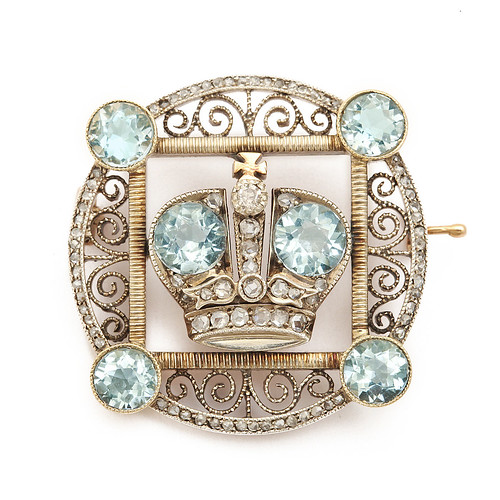 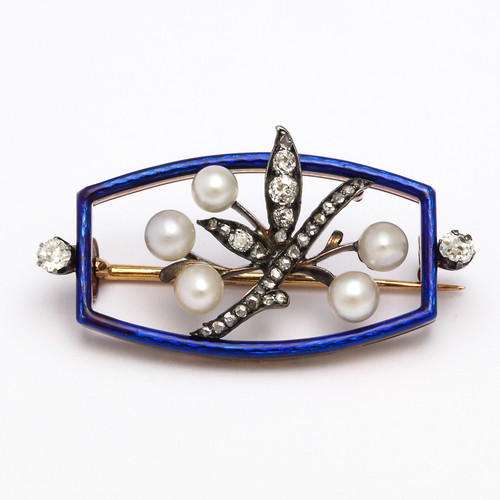 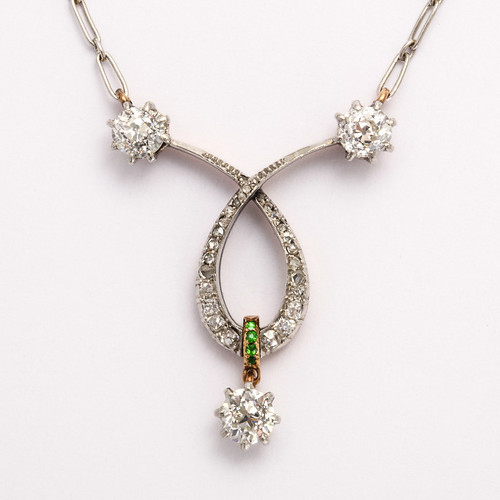 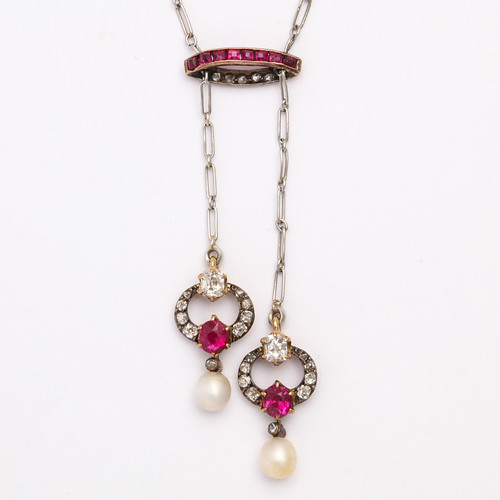 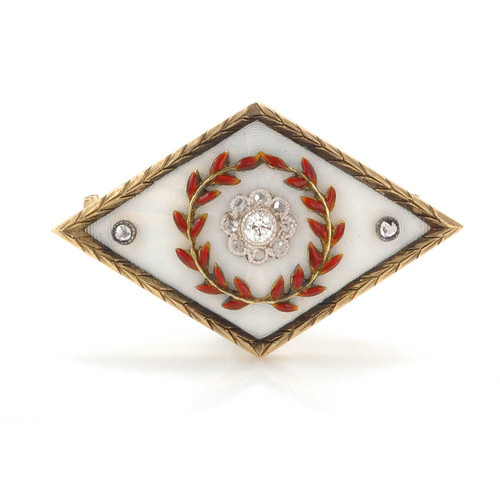 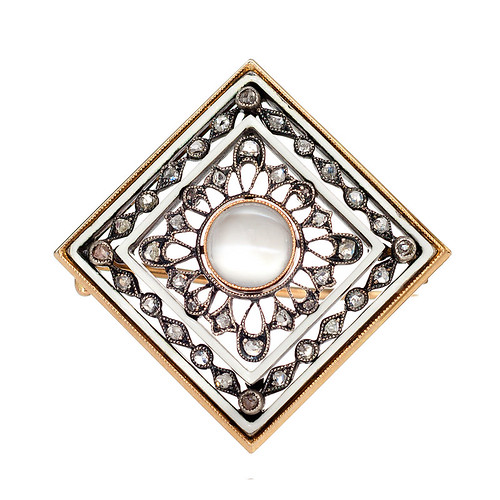 Fabergé eggs created for the general public, not just zsars, continued being the company’s most popular pieces. In the year 1900, the House of Fabergé was completed which literally was a large building which centralized all the operations–bringing together workshops, artisans, a design department, even Carl Fabergé’s own place of residence, in one large building.  Throughout the turn-of-the-century, Fabergé turned out elaborate pieces of jewelry, decorative drinking cups and bowls, items for writing, miniature hardstone animals, a wide variety of photo frames (as Kodak launched its first camera), and much, much more. He employed hundreds of craftsmen under conditions that were very superior, with great pay. As success continued, expansion happened, until the first World War broke out in 1914. The House of Fabergé lost a lot of workers to the draft, precious metals were haulted to use, so the items that were produced during this time were created from materials like copper, nephrite, brass, and silver.  Carl Fabergé ultimately fled Russia and died in 1920.

Many of the pieces of jewlery and decorative arts which Fabergé created during its height of success are highly collectible. A La Vieille Russie, a shop in NYC, has specialized in Fabergé since opening in 1961. You’ll be amazed by these authentic, one-of-a-kind Fabergé items, including some eggs that ALVR currently has in their inventory.  If you haven’t read the blog post featuring my visit to ALVR, you must!  Here is the link. 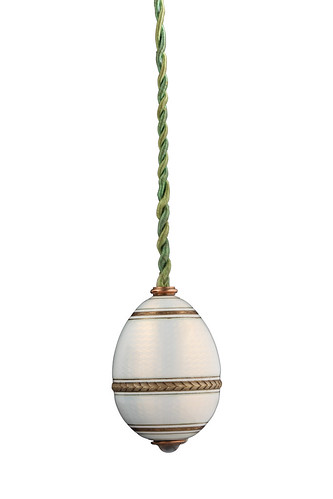 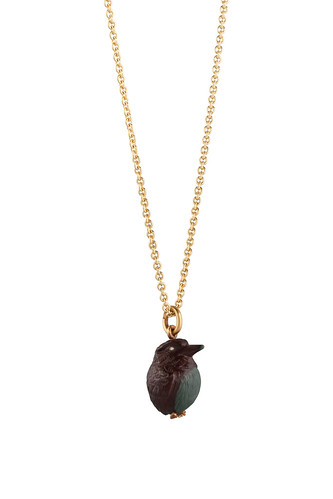 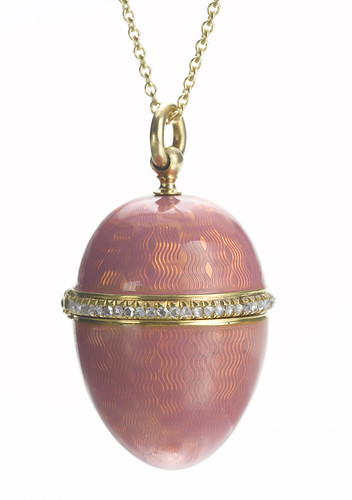 Carved two-color jasper miniature egg in the form of a Kingfisher with diamond eyes. By Fabergé, Moscow, ca. 1900.

Anyway, I thought the quick history on Fabergé paired with some pieces that are available would make my readers very happy on Easter!  Hope you enjoyed!

This sponsored blog post was brought to you in collaboration with A La Vieille Russie.