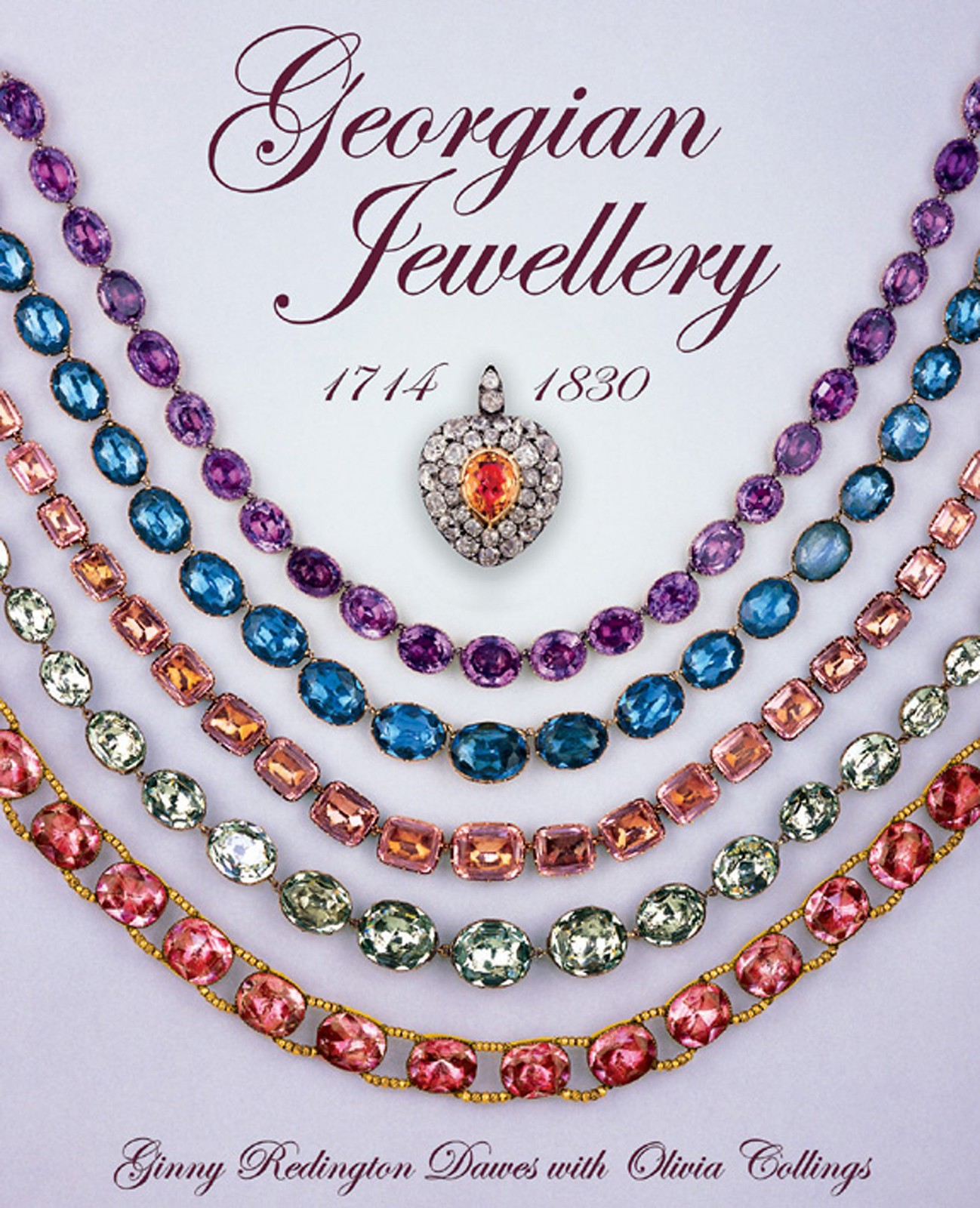 A great resource for Georgian Jewelry lovers, this book

We’re back with another installment written by Lisa of Lisa Kramer Vintage, giving us an in-depth look into the Georgian Jewelry fakes that are out there in the marketplace. If you missed part one of this educational experience, you can check it out here. Take it away, Lisa:

The popularity of Georgian jewelry has resulted in the market being flooded with fakes. One way to learn to identify fake Georgian jewelry is to familiarize yourself with pieces that are being sold as “reproductions”. This jewelry quickly hits the secondary market as genuine antiques. In addition, there have been Georgian revivals in the past, so you might come across pieces in the Georgian style that are old, but not as old as genuine pieces. And finally, there are some traditional forms of jewelry that have been worn for hundreds of years and are still being made, and it’s worth familiarizing yourself with these styles.

Pinterest: For the last couple of years I’ve been creating a Pinterest board of jewelry being sold as antique reproductions. This board also includes examples of companies selling traditional forms of jewelry that often get mistaken as antique. At the time of pinning all of these items had live links to where they were being sold (although, over time, some of these links have disappeared). As I come across new sources I add them to the board so it’s worth checking back periodically. If you study these pins you will begin to recognize pieces that you have seen for sale as genuine antiques.

eBay repros: Hundreds of pieces of jewelry are being sold on eBay as antique reproductions, many of which I’ve posted on my Pinterest board. However, a couple of pieces have been turning up on the market with great frequency and deserve special attention.

This “Victorian Reproduction Rose cut diamond Georgian flower brooch” was available for years on eBay for $199:

I’ve seen this piece for sale as a genuine Georgian piece in numerous places and always for many times its eBay price. I’ve also seen components of this brooch being sold as genuine Georgian jewelry: the leaves and flowers dangling from earwires and chains; a flower mounted on a ring shank; the central section mounted on a silver cuff. This piece is handmade in India so there are minor differences between each piece, but it is easily recognizable.

For several years these Iberian style rose-cut diamond and emerald earrings were available on eBay for $299 and they were a nice “look” for the money: 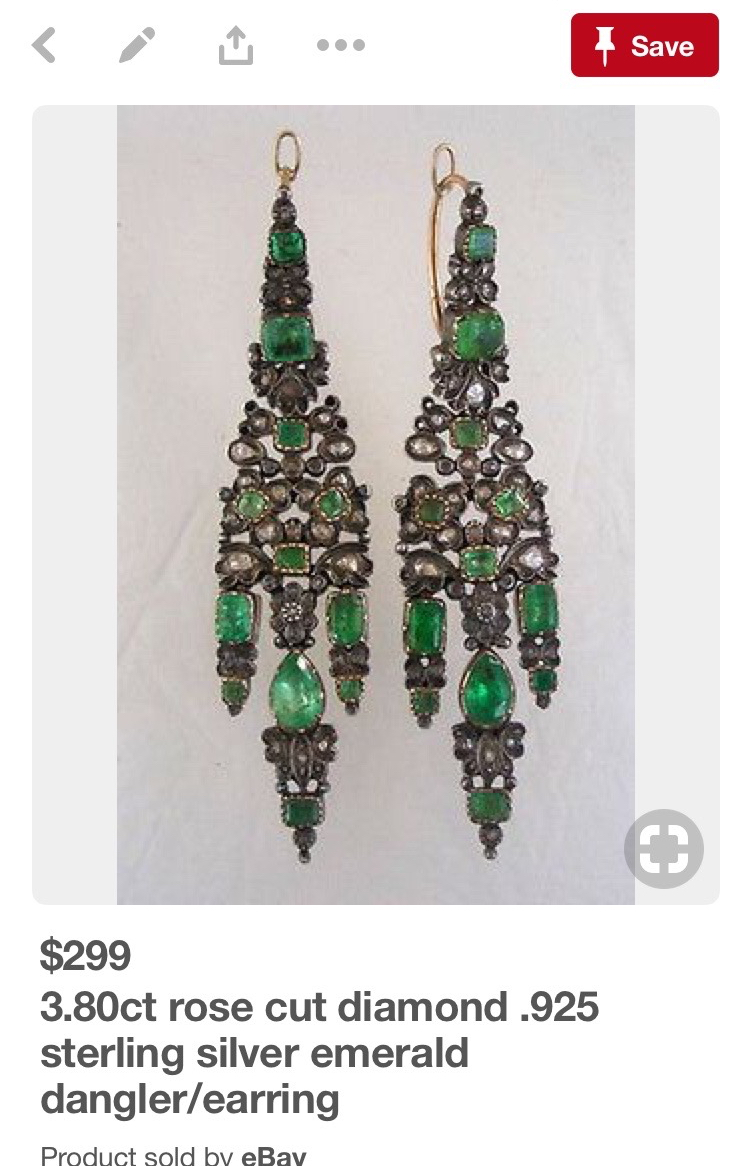 However recently they have been turning up on the secondary market as genuine 18th century pieces selling for thousands of dollars. These earrings are handmade in India and every pair seems to have minor differences, but with the same overall design and construction.

Georgian revivals: in the late 19th and early 20th century Georgian styles became popular, resulting in Georgian revival pieces that are now genuine antiques themselves, or nearly so.

What to look for: Georgian revival pieces are usually heavier than genuine Georgian pieces and the crimped settings are often cast, rather than constructed of thin sheet metal.

This Georgian revival necklace with blue enamel was made by Harold A. Lazarus who worked in England in the first half of the 20th century and did high quality reproductions of Georgian and Victorian pieces. 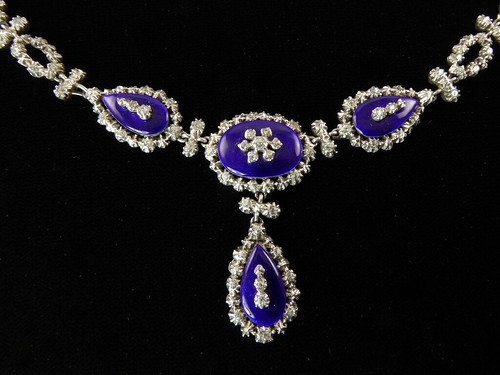 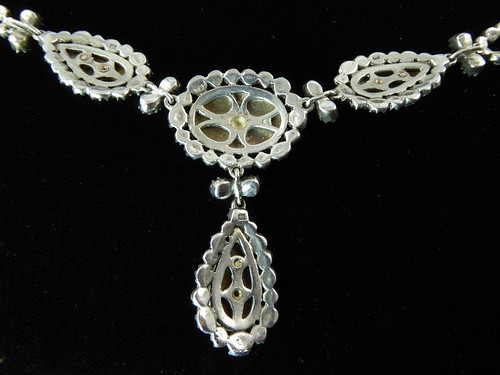 As beautiful as it is however, note how the settings are cast and much heavier than you’d find in a genuine Georgian piece.

Also look at the setting of this stick pin: 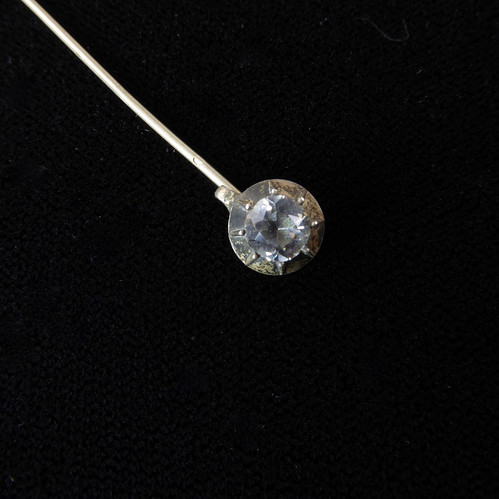 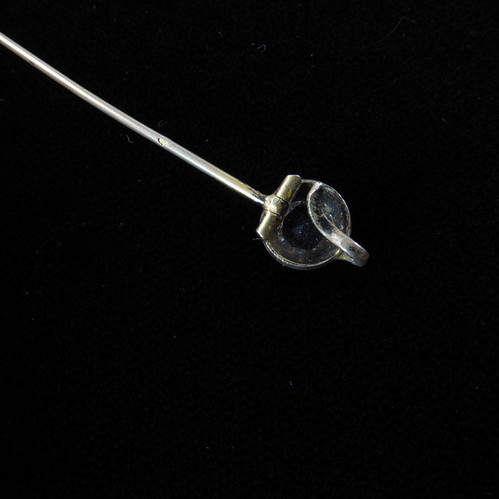 This type of crimped-look casting was used a lot in the Victorian era. 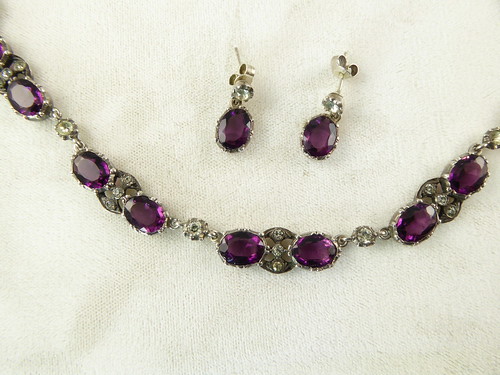 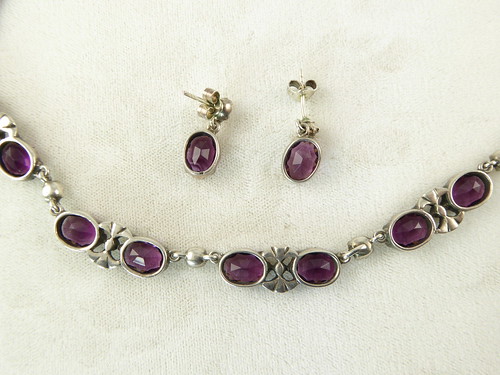 I’ve seen many pieces with this construction, probably all by the same manufacturer. Most have accents of small clear stones between the larger colored stones.

Georgian style portrait miniatures were also revived in the late 19th century. Following the centenary of the French revolution images of Marie Antoinette (or similar 18th century fancy ladies) became popular as the subject of miniatures; they are not as finely painted as a genuine Georgian miniature and their frames are not of typical Georgian construction. 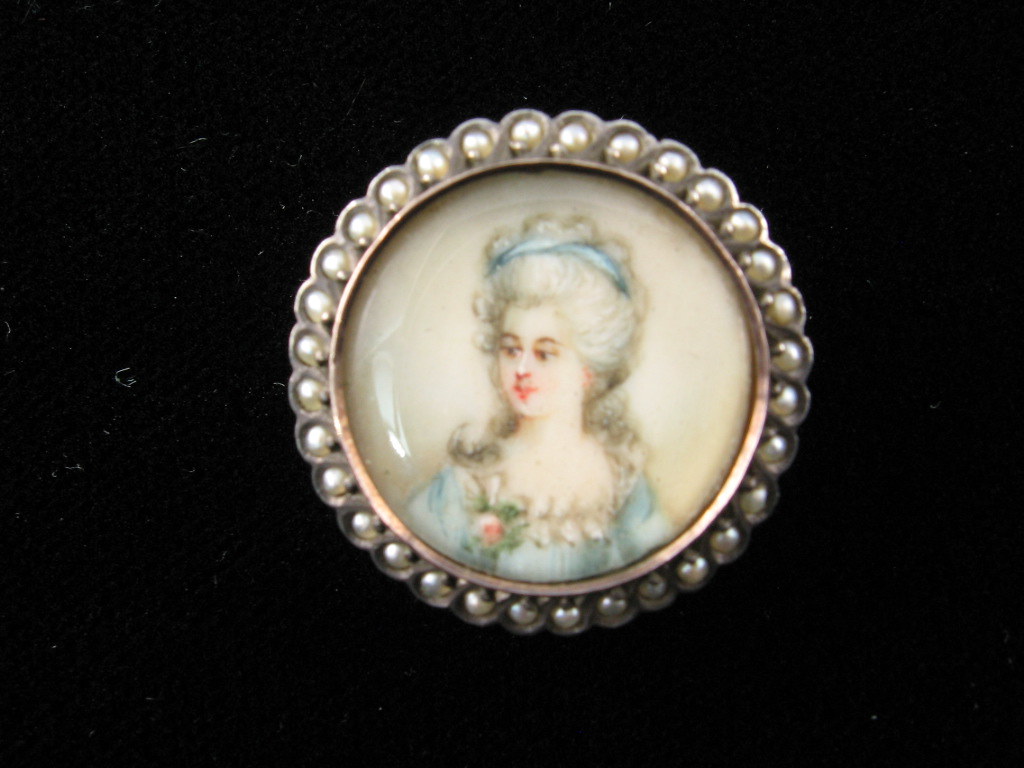 Traditional French jewelry: there are some French companies that sell traditional forms of jewelry – saint esprits, poissarde earrings, crosses – that sometimes get mistaken as antique. This jewelry is of good quality, and not inexpensive, but is worth studying since it can end up on the secondary market. I’ve posted many of these pieces on the Pinterest board and one of their Saint Esprit pendants in this post as an example. 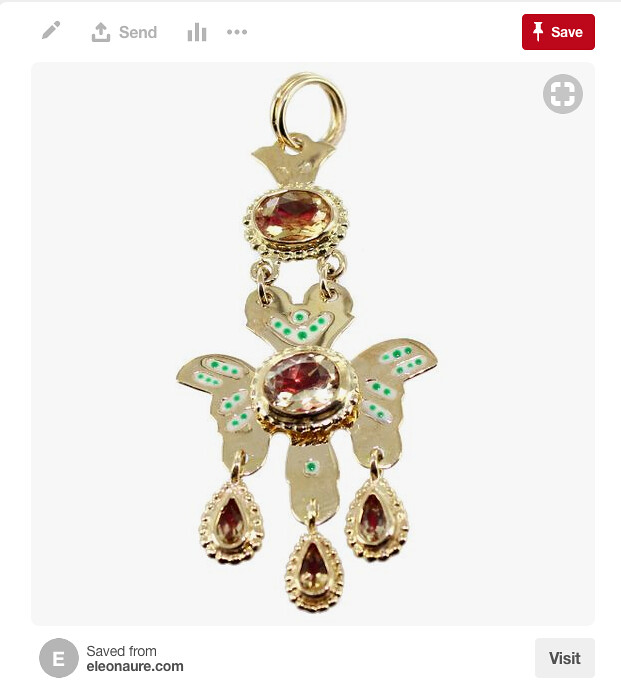 Dutch rose cut diamond rings: since the late 19th century Georgian-style rose-cut diamond cluster rings have been made in the Netherlands. These rings are generally of high quality and, since they are usually hallmarked, they are not considered fakes but rather a traditional style. However, they sometimes get mistaken for Georgian rings. What to look for: the Dutch hallmark for gold is an oak leaf and even the earliest of the oak leaf marks post-date the Georgian era and the vast majority are from the 20th century. Check out the Antique Jewelry University video in the reference section below to see some of these rings and their characteristics.

Eye miniatures: reputable references estimate that only about 1000 genuine eye miniatures exist today and I’ve seen almost that many for sale in the last few years. Eye miniatures were only made for about 30 years, so they are very rare.

What to look for: since Georgian eyes were custom-made pieces, the painting of the eye should fit perfectly in its frame; there should not be gaps betweem the edge of the miniature and the setting nor should parts of the eye or eyebrow be cut off or sit too close to the edge of the frame. Faked pieces often utilize a genuine Georgian or Victorian brooch or ring with a hair compartment and insert a new eye under the crystal. Sometimes eyes are cut out of larger portrait miniatures and you may see remnants of the rest of the face. And sometimes eyes will seem cartoonish; originals were finely painted with tiny brushes and beautifully rendered.

Memorial and sentimental jewelry: for a while it seemed that the skill it took to create enamel memorial rings precluded their being faked. However, as their price has risen, a number of pieces have hit the market recently that seem “questionable”, so proceed with caution.

Also think about how easy it is for an engraver to add a date or phrase to a piece of jewelry. An engraver can easily take a plain gold band and make it into a posey ring by adding a sentimental phrase inside; since genuine posey rings sell for at least ten times that of a similar plain gold band, you can see the incentive. Look for age-appropriate wear and buy from a specialist dealer who can show you the subtleties that make the piece authentic.

Rarity: if you suddenly start to see a lot of similar, supposedly rare, items this is a clue that there may be a new source of fakes on the market. Sometimes, if the craftsmanship is unusually good, even experts can be fooled when they first hit the market and it is only after multiple examples start turning up that suspicions are aroused. Also if a dealer makes claims about the royal origins of their pieces, beware. Unless there is a paper trail showing royal provenance, this is most likely a fairy tale.

Design: While some Georgian jewelry, like cannetile (filigree) pieces, can be elaborate, in general the designs are fairly restrained. Beware of pieces that seem too “fancy” or that don’t have a harmonious design. Fakers often get creative, a little TOO creative.

Beware of motifs that are currently very popular: snakes! skulls! flaming hearts! crowned hearts! witch’s hearts! Popularity breeds fakes. I’ve seen skulls hanging from snakes, skulls surrounded by snakes, hearts floating above skulls. Fakers must figure that if one motif is good, then two must be better. So look closely at how the piece is constructed when you come across pieces with these motifs, especially if a piece contains more than one.

Also beware of “Frankenjewels” which are genuine antique pieces that have been embellished with new, popular, elements. There are infamous Bulgarian dealers on eBay that slap skulls on Victorian pieces and sell them as early memento mori jewelry (the same dealers also sell completely new fake pieces also laden with skulls).

Conclusion: if you study the genuine Georgian jewelry shown in my previous post and in the resources below, you will begin to recognize patterns in its design and construction. Some of this is subtle, but if your gut tells you that something is “off”, listen to it and look carefully. And if you add to that familiarity with the fakes, repros, and traditional styles discussed above you will be well on your way to being able to identify Georgian jewelry.

Lisa Kramer Vintage Pinterest board of repros and fakes

Antique Jewelry University: particularly useful is this video where they evaluate three Georgian-style rings element-by-element. Scroll down to the bottom of the page in this link for the video.

“Georgian Jewellery” by Ginny Redington Dawes and Olivia Collings. This book is the bible on the subject. It has a chapter about Georgian fakes.

“Antique Paste Jewellery” by M.D.S. Lewis. There is a chapter on reproduction paste jewelry from the early 20th century.

“World Hallmarks, Volume 1”, by William Whetstone, Danusia Niklewicz, and Lindy Mautula. This is the standard reference for European hallmarks.