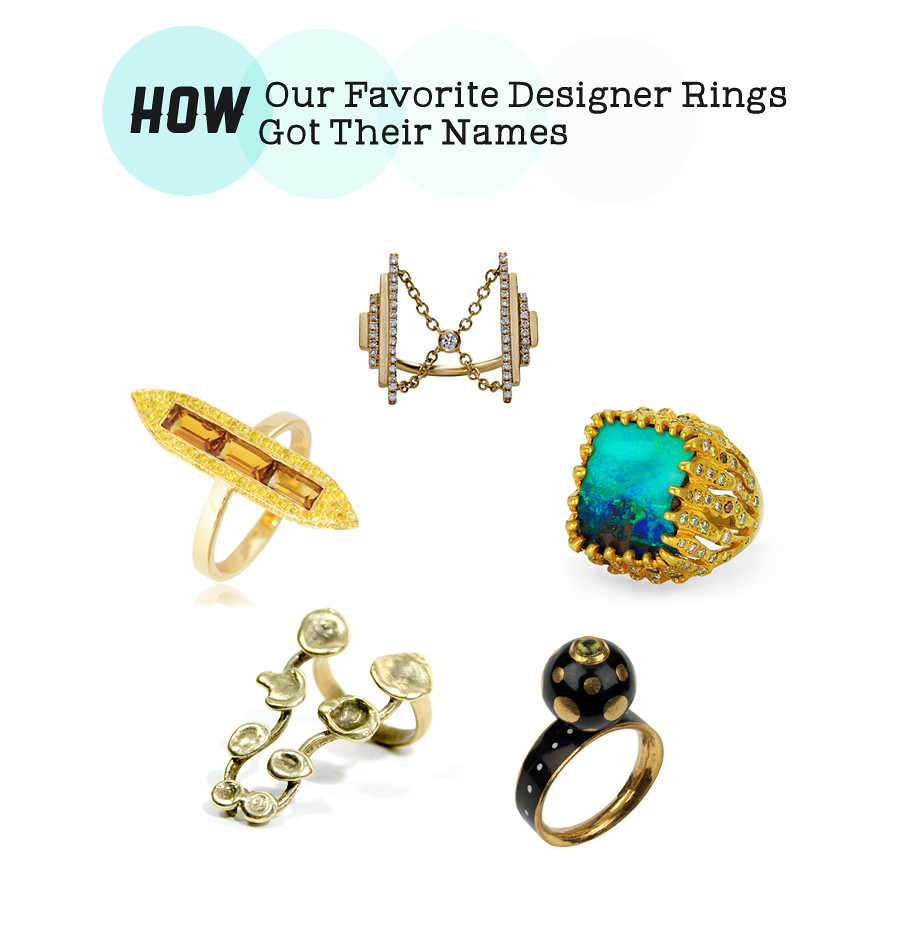 What’s in a name?! — The famous quote uttered by Juliet in Shakespeare’s play Romeo & Juliet may be one of the most well known quotes of all time. When we truly think about it, what IS in a name and how important is it for jewelry designers when creating a moniker for their collections. Are they a make or break for how well the collection sells?!

When I created my jewelry line three years ago, I knew one thing for sure–I didn’t really want to name my pieces. I’ve always been into numbers and when I decided I wanted to create my own line of rings, it was easy deciding on the question of, well, how many? Five fingers on each hand = five rings in the collection. I decided to name each ring using the numbers one through five. I wanted the designs to be more about what each looked like rather than what they were named. With my background in literature, I’ve always found myself preferring poems that were titled “Untitled” or quotes written by “Anonymous.” Is that weird?! No, it’s just me. The simplicity of being named a number fits myself and the collection. But don’t worry, I would never pull a Seinfeld and name my daughter Seven.

I got curious in names and decided to do some research. Turns out, now more than ever designers are naming their pieces based on the most simplistic way of describing something–like, if you didn’t have any experience in the field of jewelry, but rambled off the name of the piece, you could identify it easily out of a group of jewelry. Examples like, “Diamond bar ring” or “Pyramid onyx ring” or “Gold spike ring.” I would say more than half of jewelry is named in this way.

But what about the creative names…pieces that were essentially the “diamond bar ring” but now have a name called Goddess Cleopatra…or something exotic like that. I wanted to find out from designers who put in some brain power and meaning into their naming and see what they had to say! So I asked five designers to tell me the inspiration behind a specific piece and how each came up with the name of it. Here’s what they had to say:

Explanation: “The Aztec Chain Ring is part of the Aztec Collection. This collection was inspired by a trip I took to Mexico years ago during which I visited a Mayan Temple ground. When I began sketching the concepts and layering different lengths of lines on top of one another, it had a clear resemblance of these Aztec temples. To think that these immense, elaborate structures were built by bare hands in the 14th to 16th century with such intricate detail really just stuck in my mind and that’s what triggered me to design an entire collection based on that unique architecture.”

Explanation: “All pieces are inspired by and named after woman in history, stories, and folklore. I love the idea of bringing a piece of history and mystic from the past to present with her designs. Inspired by the spirit of her elegant and stylish Indian heritage, Suneera brings precious jewels that can be called modern heirlooms. The design aesthetic is an eclectic mix that reflects personality and individuality.

Meredith is a name that comes from an old folklore, meaning the protector of the sea. I enjoy working with opals as each one is so unique. When I saw this Australian opal, I fell in love with how the surface has waves and a magical depth like the ocean. For this piece, I designed with 18k yellow gold and champagne diamonds. The rich yellow of the gold beautifully compliments the cobalt’s and greens in the opal.”

Explanation: “Inspired by the fine gold thread weaving traditions of Benares, the pattern is drawn from an 18th century sari border. This joyful ring also nods to the style of Carlo Giuliano, who was working in London around the mid 19th century.”

Explanation: “This ring is created by water casting — a free form casting technique where you throw molten metal into water to create spontaneous shapes. This technique dates back to an Eastern European tradition called molybdomancy, where they interpret the shapes of the water casting to tell your fortune. Although I’m not a fortune teller, I love interpreting the shapes after casting, and allowing the wearer to interpret that shapes and instill their own meaning in the piece. To me, this piece really shows the process and resembles stones skipping and creating ripples.”

Explanation: “My new Sacred Windows collection is inspired by the arch windows and stained glass artwork of cathedrals and churches – hence the name Sacred Windows! It focuses primarily on simple silhouettes reflective of the arch structures set with an array of colored gemstones reflecting the stained glass patterns you usually see in those windows.”