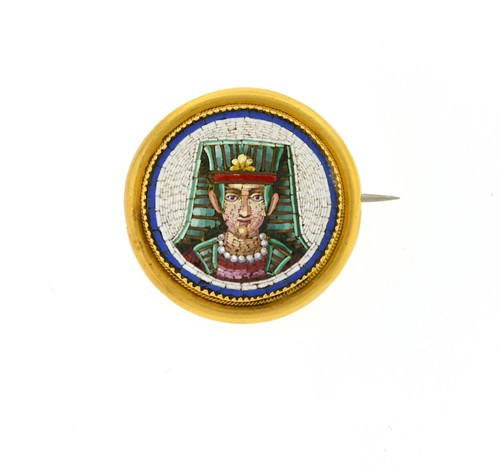 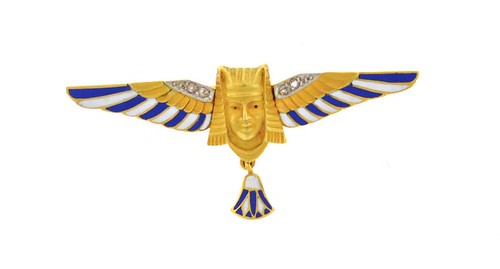 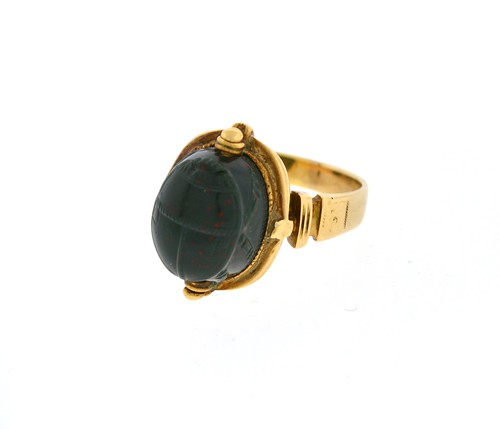 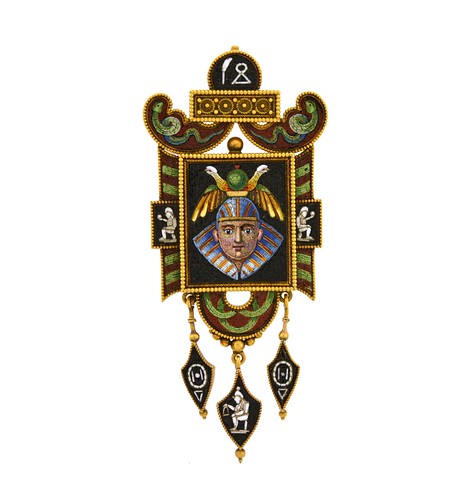 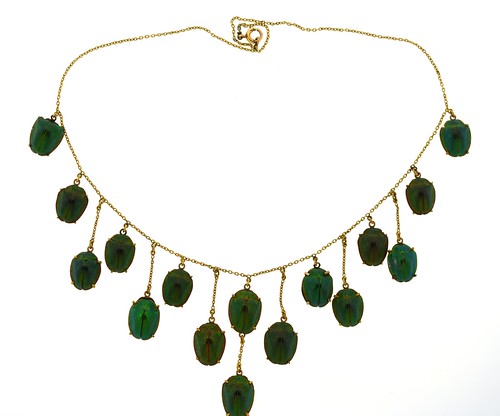 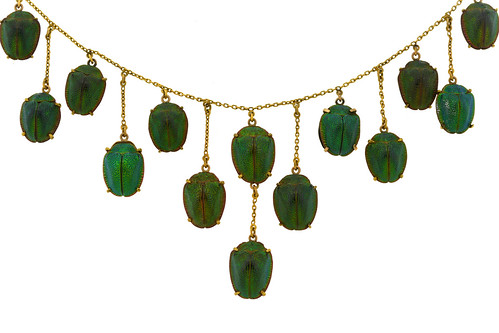 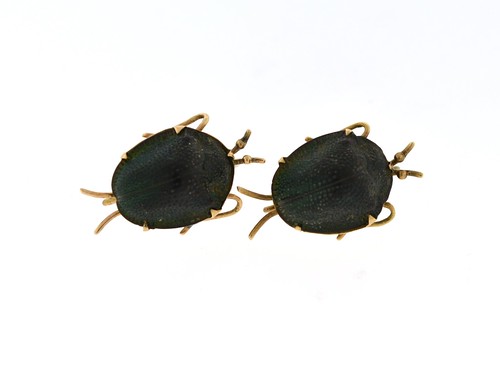 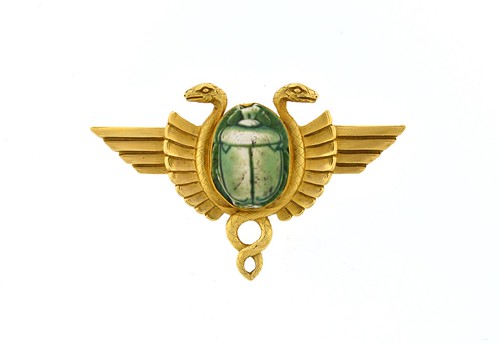 Distant and exotic civilizations inspired many creations during the early 1920s and onward to spur a movement called “Egyptian Revival,” which characterized the type of jewelry that was influenced by ancient Egypt.  In November of 1922, the efforts of Lord Carnarvon and Howard Carter culminated in the opening of the tomb of Tutankhamun, which was located in Egypt within the Valley of the Kings.  Their incredible discovery was esteemed as one of the most valuable archaeological finds of the 20th Century!  This completely enthralled and aroused much interest throughout the world. Although Egyptian influence had already begun decades prior, the Egyptian Revival movement was heaviest following that particular discovery. Prior to that, author Vivienne Becker explains, “Ancient Egypt had been a design inspiration throughout the 19th century, particularly in France, from the time of Napoleon’s campaign in Egypt in 1798, although the effect was really only felt in the jewelry world in the 1860s, following discoveries of ancient Egyptian ornaments by the French archaeologist Auguste Mariette, and around the time of the opening of the Suez Canal, by the Empress Eugenie, in 1869″ (Becker, Vivienne. “Five Rare Egyptian-Revival Jewels” Sotheby’s Magazine. November 2013.)

When I visited Joden Jewelry in July, located in Grove City, Pennsylvania, I was blown away by their extensive inventory.  So many eras all in one place–so many niches for any and every collector. I knew they would have quite a collection of Egyptian Revival jewelry, and I was right!  From micromosaics to real scarab beetles, and a few things in between–even spanning different time periods of the movement as well. These seven pieces featured from Joden Jewelry will enamor any Egyptian Revival collector, whether you’re just a beginner or have been collecting for years!

Round circular brooch featuring a micromosaic pharaoh: this spectacular piece was created using over 1,000 tiny pieces of thin, tile-shaped glass or stone to create this image of an Egyptian pharaoh.  The gold surrounding frame holds the micromosaic which consists of a white background, Egyptian blue outline, and multitonal hues of reds, greens, and flesh-tone tiles. Price: $3,000 CLICK HERE TO PURCHASE

Enamel and diamond winged pharaoh brooch: another unique piece of Egyptian Revival jewelry, handmade through and through, down to the dangling bell-shaped detail.  The white and blue enamel are some of the Egyptian colors consistently used with revival jewelry. There are rose cut diamonds along the wings and a lovely pharaoh in the center. Price: $5,685 CLICK HERE TO PURCHASE

Bloodstone scarab ring: scarabs are carved from many different gemstones sometimes even faience which is not a gemstone.  Bloodstone is such a unique gemstone to carve a scarab into–you don’t see too many like that!  It should be noted that this piece is finely detailed, down to the legs of the scarab being distinctly carved as well.  The scarab is set using a pin through the stone and held in place with two small gold beads. The ring is currently a size 7.5 and done in 14k yellow gold–it can easily be sized up or down! Price: $800 CLICK HERE TO PURCHASE

Intricate and striking micromosaic brooch: a masterpiece of tiny glass and stone tiles, this brooch has multiple elements of Egyptian Revival jewelry going on–the pharaoh is first and foremost, then the Etruscan detailing, followed by the motifs of serpents and hieroglyphics depicted throughout. The colors are bright and warm, and the black is a great contrast.  This is an example of an earlier Egyptian Revival piece, taking its place during the Victorian Era. Price: $11,375 CLICK HERE TO PURCHASE

Real beetle fringe necklace: if you want something that will surely strike up a conversation, this real beetle fringe necklace is an ideal piece!  It dates back to the Victorian Era during which the first round of Egyptian influence began in the world of jewelry.  There are 16 actual scarabs with iridescent green carapaces–and no two are exactly the same!  I like to call these Cleopatra’s ornaments!  CALL FOR PRICE/PURCHASE

Real beetle earrings: of course you must own the earrings if you buy the necklace–OR if you want to try out the real beetle jewelry look but don’t want something too large, these earrings are the right idea!  They are handmade set in gold frames (of an unknown karat) and use wire to recreate legs and antenna that are visible from the front and continue on the backs. CALL FOR PRICE/PURCHASE

Double serpet scarab brooch: this is one of my favorites! Two serpents go head-to-head creating coiled tails, and encircling a scarab.  I love the wings on this brooch–it is already such a powerful piece of symbolizism with the snake representing protection and the scarab representing rebirth and life, and the wings just make it that much more special.  A strong piece with a story to tell! Price: $5,750 CLICK HERE TO PURCHASE