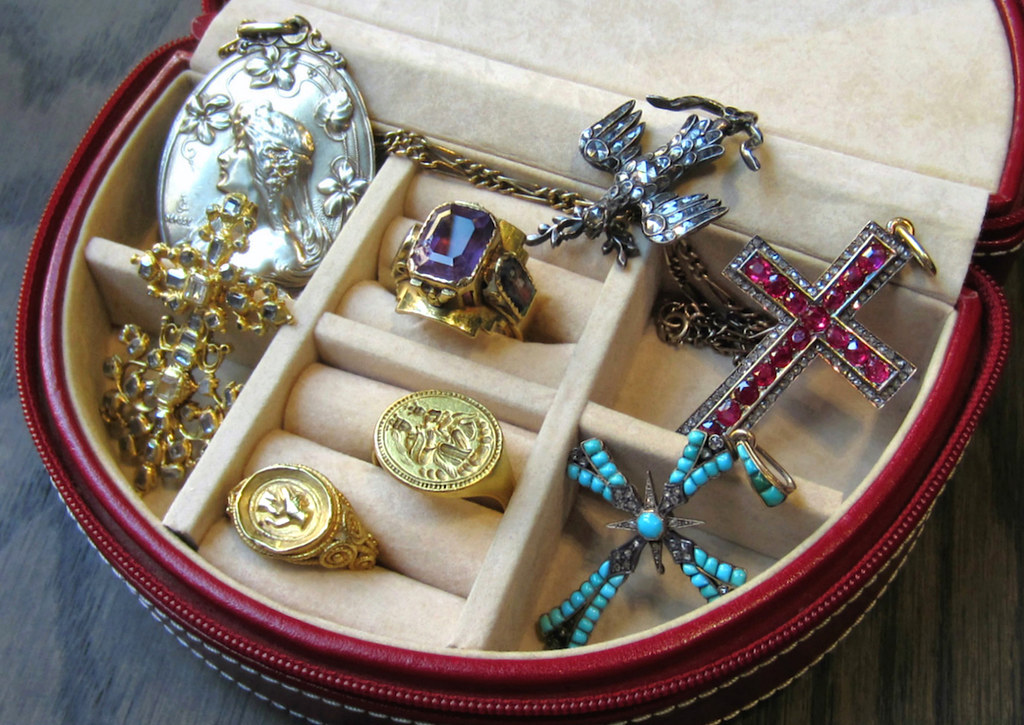 Doyle & Doyle is thrilled to debut pieces from a spectacular cache of rare antique jewels, all acquired from a single collector. Including jewelry from ancient Rome, 17th century Spain, and 19th century France, these are the best examples of their type and many are hallmarked by well known jewelers. Keep reading for a sneak peek of the historic collection before it goes on exhibition at Doyle & Doyle in September. 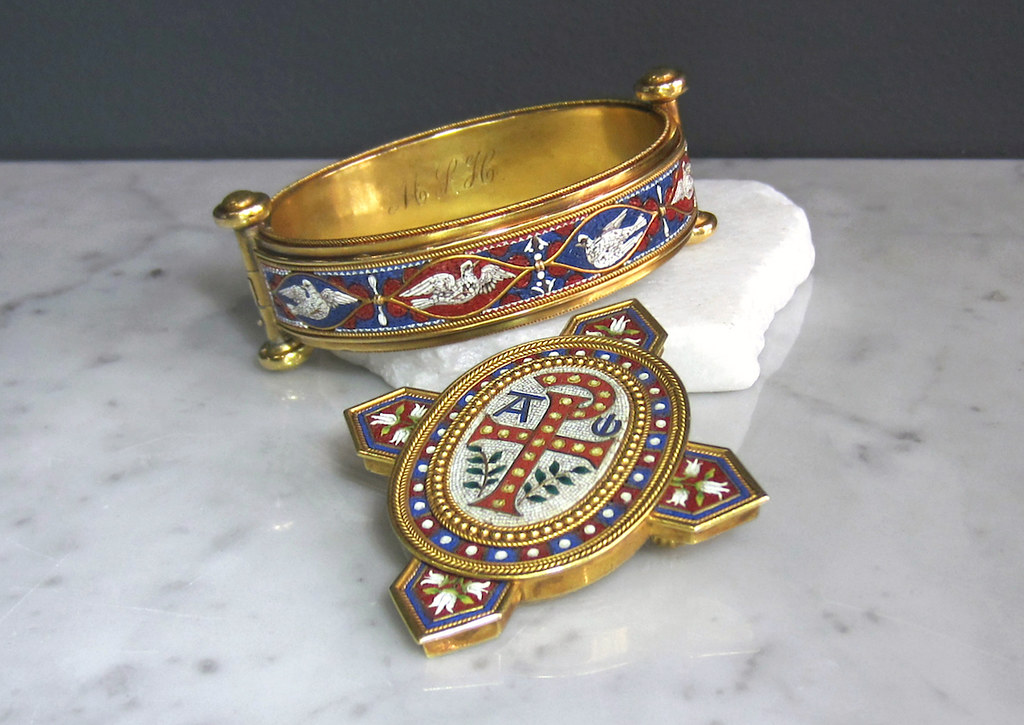 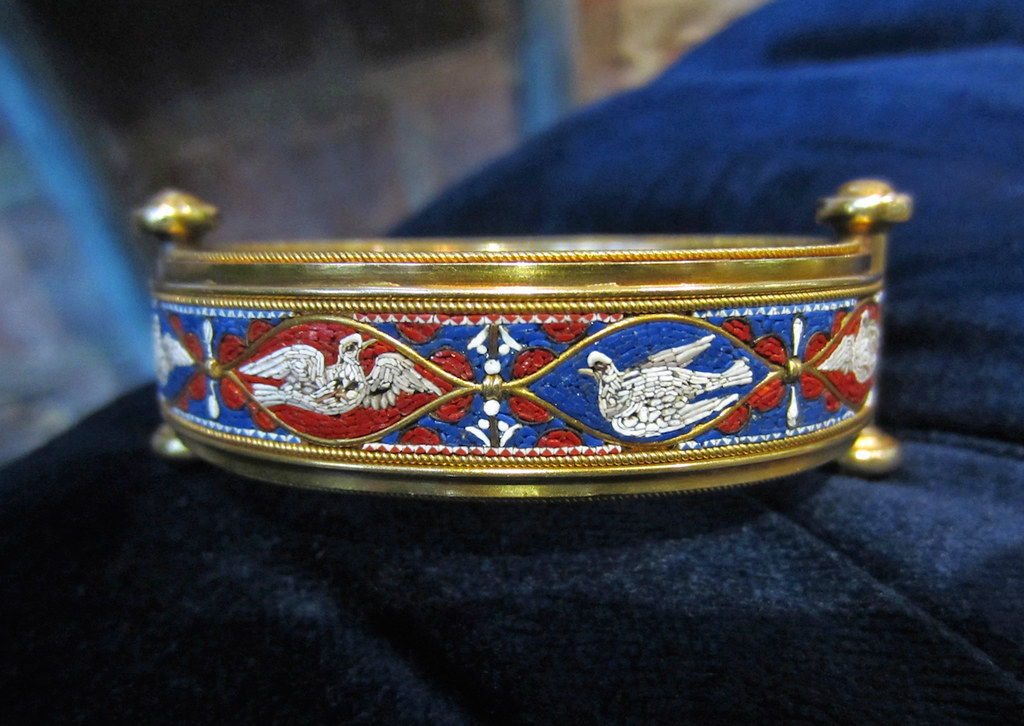 These exquisite micromosaic pieces date to the mid-19th century and are hallmarked for the Vatican Workshop of the Papal State.The Vatican’s mosaic studio was founded in the 16th century, its skilled artisans create artworks commissioned by wealthy patrons and pieces for the Pope to give as gifts.  The Sistine Chapel ceiling by Michelangelo, Saint Peter’s Square designed by Bernini, and Raphael’s “The School of Athens” are among the many masterpieces you can discover at the Vatican. Originally founded in the 16th century, the skilled artisans working in the Vatican’s mosaic studio create pieces for the Pope to give as gifts and artworks commissioned by wealthy patrons. They also oversee and maintain the ten thousand square meters of colorful mosaics that adorn Saint Peter’s Basilica. This bangle and brooch are beautifully made, featuring glass tesserae so tiny that the designs look like paintings in shades of red, blue, green, and white. Perhaps a wealthy young man purchased them during his Grand Tour through Europe, or they were gifts to an important Church official. No matter their origin, they are little works of art that display the incredible skill of the Vatican’s workshop. 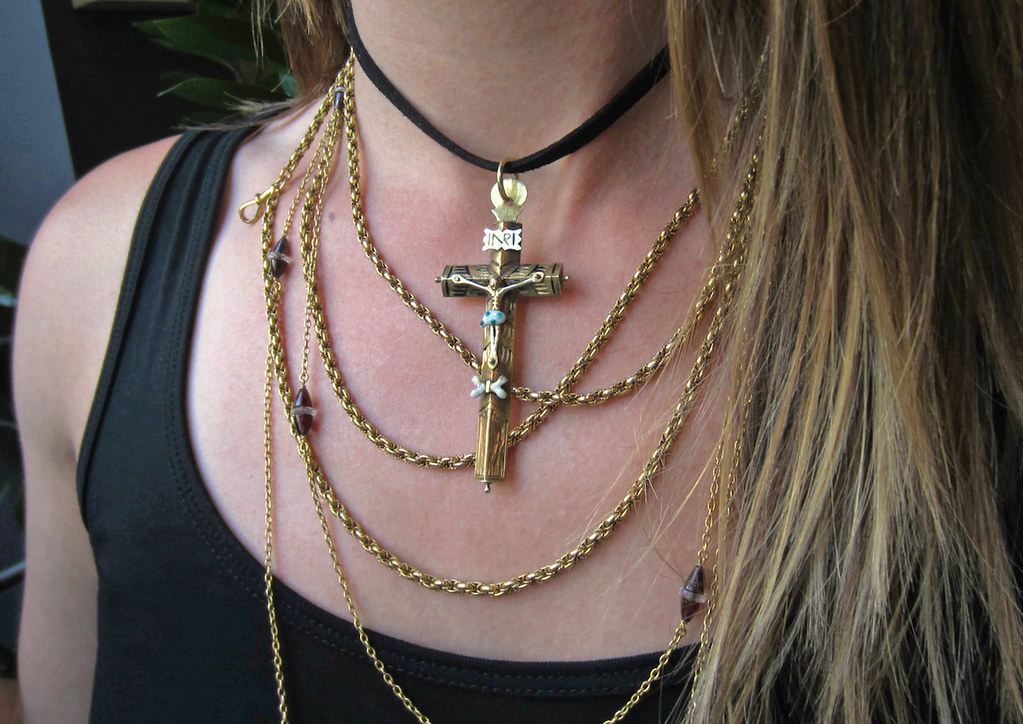 The collection includes other ecclesiastical jewels in addition to the Vatican micromosaics, including a variety of gem-set and enameled crosses from many different periods. This striking dimensional crucifix cross is Spanish from the 17th century, detailed with enamel and engraving that resembles wood grain. Although probably not original, we love it worn on the black ribbon choker, especially when layered with antique gold guard chains. Although these are museum quality jewels, they’re definitely wearable! 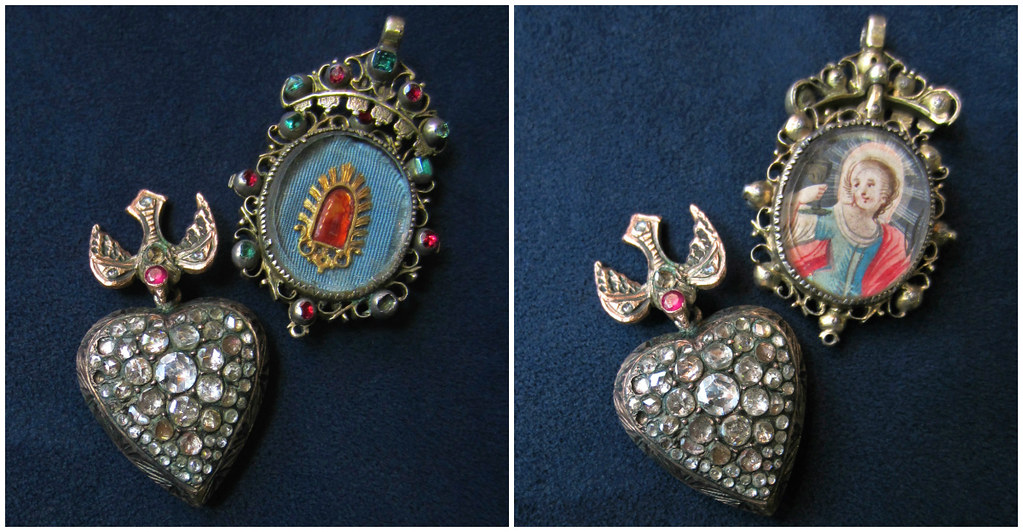 There are also charming examples of sentimental and devotional jewelry. The rose cut diamond encrusted heart hangs from a sweet rose gold dove. The diamonds are foil backed and you can see hints of pink, gold, and even green reflecting through the stones. The rare late 17th century Spanish reliquary pendant is a small compartment that holds a tiny bit of a saint’s blood. It’s backed by a hand painted figure of a female saint and framed by emeralds and garnets. This type of jewel was probably a private devotional artwork. Spain being an intensely Catholic country, people believed in the power of saints to affect their daily life. In additional to more traditional liturgy, 17th century Spaniards prayed to their personal saint to intervene and make their lives better. 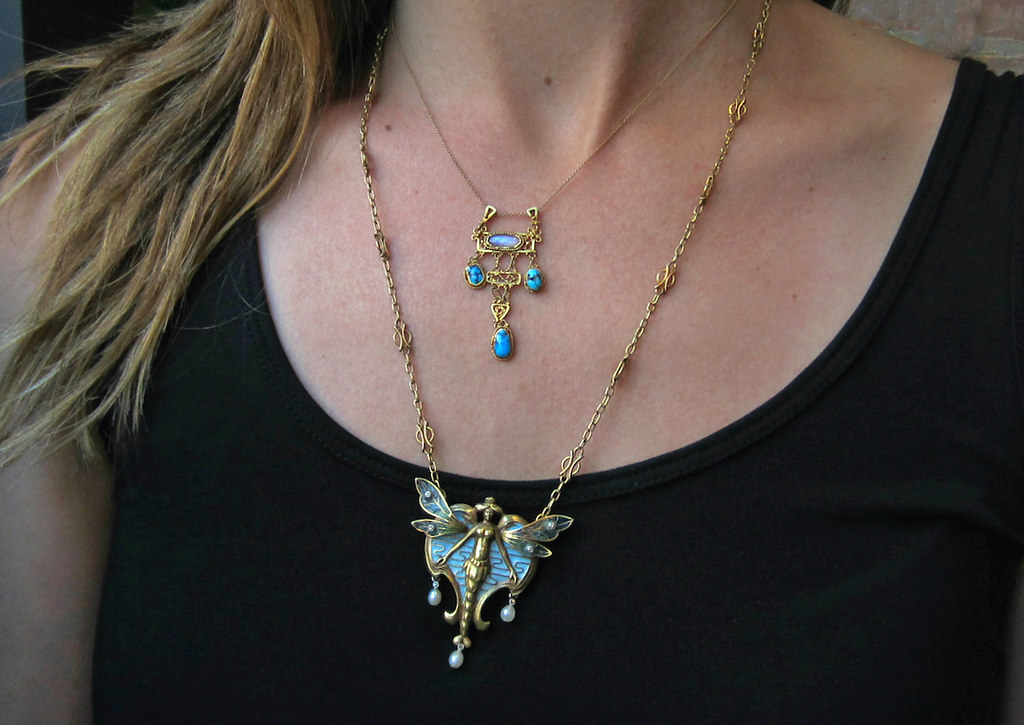 The other half of this incredible collection is comprised of museum quality Arts & Crafts and Art Nouveau jewelry. The Arts & Crafts Movement was a direct response to the mechanization and poor working conditions engendered by the Industrial Revolution in the mid-19th century. Adherents looked to the Middle Ages, nature, and popular folk art for inspiration, seeking to return to an idyllic time before mass production. Shying away from precious materials, Arts & Crafts jewelers favored readily available gemstones, such as garnet, amethyst, citrine, opal, and moonstone. The delicate gold pendant is British, comprised of hand wrought wirework set with bright blue turquoise and glowing moonstone. 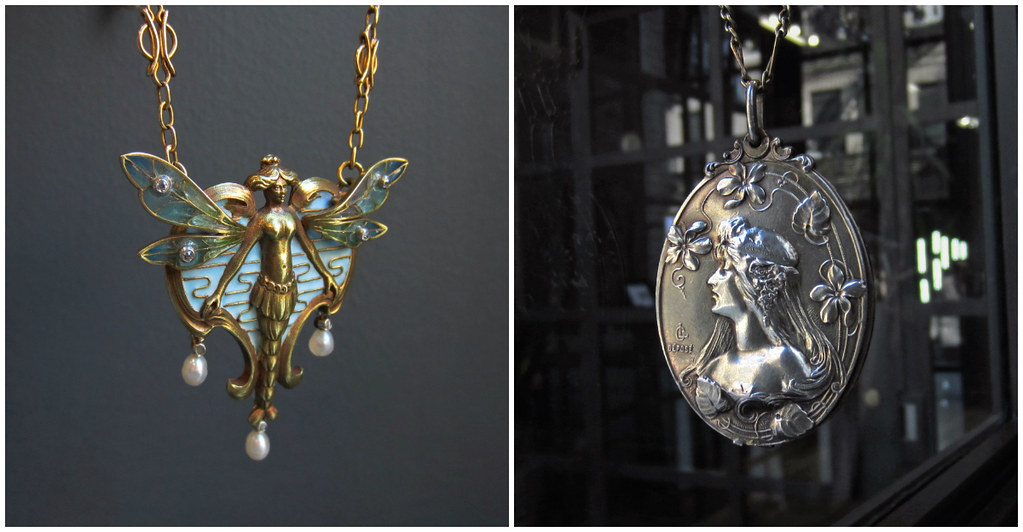 By the end of the century, Art Nouveau artists took the theme of nature to the next level. Art Nouveau jewelry often incorporated idealized female forms with swirling, whiplash hair framed by sensuous flora, like this striking silver mirror locket. Dating to 1900, this lovely piece is hallmarked for French jeweler Lucien Coudray. Coudray specialized in engraving medals and won several prizes for his artistry. Another popular form was a winged female with gossamer enamel wings studded with tiny gems or pearls. This statuesque dragonfly woman was created around 1900 and bears the hallmark of noted Art Nouveau jeweler, Gaston Laffitte. The light filters through the translucent green plique-a-jour enamel wings, creating a delicate stained glass effect.

This is just a small preview of the incredible historic collection – want to see it all? Doyle & Doyle is putting on a public exhibition in September. Email info@doyledoyle.com for more information and to get on the invite list!

Update: The owner of this beautiful collection has generously decided to sell it to raise funds for flood relief. The new theme for Doyle & Doyle’s upcoming Vault jewelry exhibition is Jeweled Talismans, curated by Elizabeth Doyle and opening Thursday, September 28. Email info@doyledoyle.com if you’d like to attend the opening night party!

This post was contributed by Juliet Rotenberg of Doyle & Doyle, thank you!!

Want more?! To check out the store tour of Doyle & Doyle, click here.