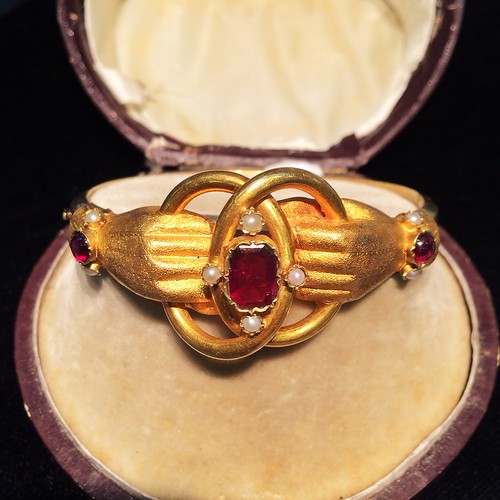 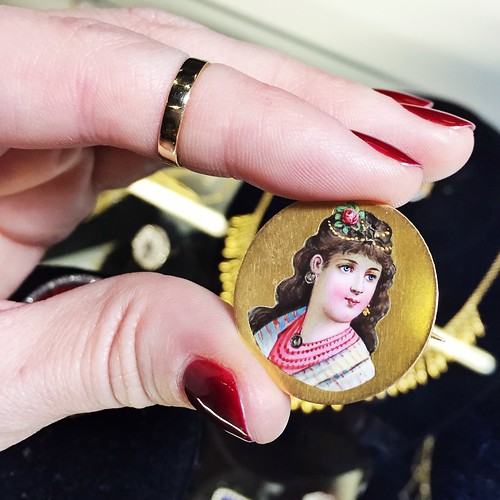 The Pier Show in NYC happens twice a year, featuring over 400 exhibitors, including some of the best antique and estate jewelry vendors.  I’ve entrusted Levi Higgs, with his expert eye and commendable taste, who works in the Archives Dept. of David Webb and has one of the most eye-appealing Instagram feeds ever to be my Gem Gossip Correspondent for the day!  Take it away, Levi:

As spring arrives in New York City, there is one short weekend when Pier 92/94 becomes home to one of my favorite antique shows ever. The hierarchy of antique shows in New York City probably put the Pier Show below shows held at the Park Avenue Armory, but the Pier Show definitely has breadth and depth that other more prestigious shows lack. My assignment this time around was to canvas the seemingly endless rows of booths and find beautiful pieces of jewelry to share. I started out by asking my fellow jewelry connoisseur, Sara Vincent (@rococoredhead) to come along with me in order to lend a manicured and feminine hand to my photos, as well as to help me sift through the trays and shelves and hoards of jeweled goods to find the gems, so to speak.

Let it be known that The Pier Show can be glamourous and exciting, especially when rubbing elbows at the trays with the likes of Lynn Yeager of Vogue, Lauren Santo Domingo of Moda Operandi and Interior Designer Nate Berkus. Take those sightings with a grain of salt, however, as there are people from all walks of the trade present, but that’s what makes it great. Dealers, students, collectors, and browsers alike, and it’s also not uncommon to hear some bickering over heat-treated vs. natural stones in raised voices.

Anyhow, Sara and I felt the need to fuel up at our favorite Upper East Side diner, EJ’s Luncheonette, before heading down to the Piers, as we would need our strength for the trek from booth to booth. Upon arrival, we braced ourselves, and dove straight in.

The first booth we stopped at was Roy Rover Antiques and Fine Jewelry from Hellertown, Pennsylvania. I was keeping an eye out for anything I felt was particularly “Gem Gossip” in feeling, and this bracelet caught my eye. It was 14K gold with pearls and garnets, but I liked the hands and the powdery look to the gold, as well as the strong design of the hands and interlocking rings.

Meandering our way through the booths, keeping our eyes peeled, we came upon the booth of Dianna Rutz Dalton in Concord, Michigan. She was juggling multiple clients at once, so when we asked to see some things from her case, she pulled them out and left us to play. That’s when we spent some time with this beautifully painted pendant brooch, delicately done and very vivid. We didn’t get time to ask her many questions about it, but we both agreed it would make for a special piece. 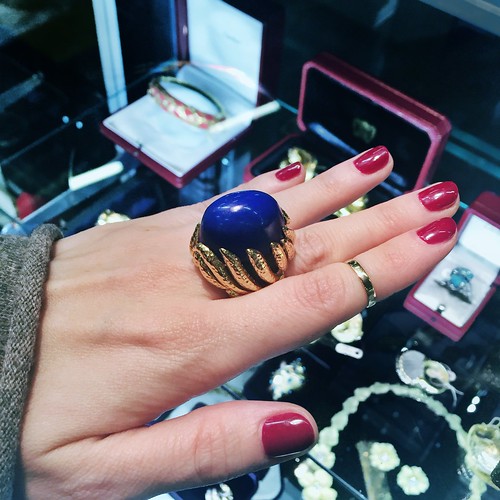 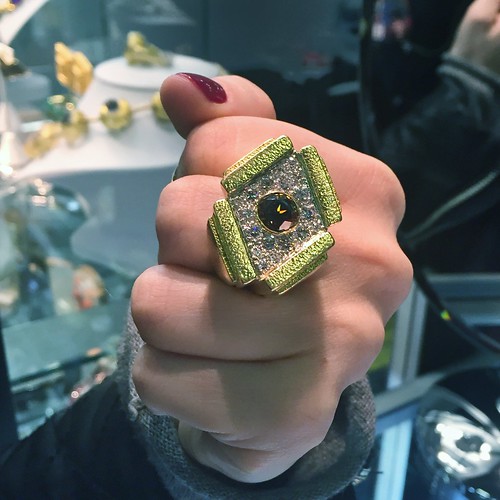 Something that begins to strike you as you start conversations with dealers from the United States, and indeed, the world over, is that everyone in the jewelry world is connected, or knows someone who knows someone you know. Both Sara and I work in the industry and our bosses were familiar to many of the dealers we struck up conversations with. That’s why it was so fun for me to pick out some vintage David Webb pieces we spotted. This lapis and gold ring was sculptural and huge, but looked so good with Sara’s red nails and she could have walked out the door with it and looked completely on trend.

Another vintage David Webb ring had a center natural brown diamond that looked powerful and bold in hammered gold. 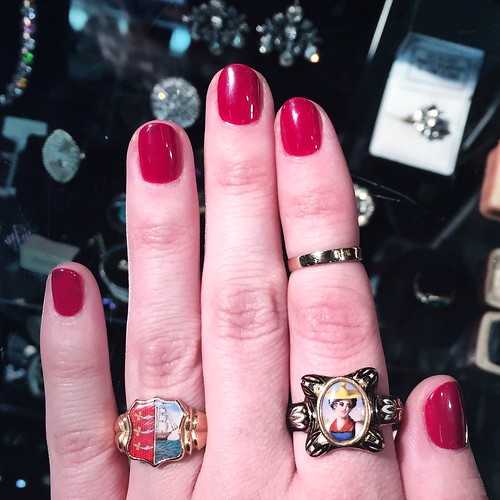 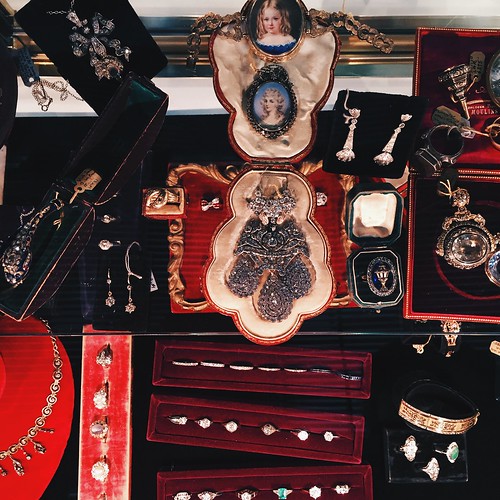 At the booth for The Spare Room Antiques from Baltimore Maryland, Sara met women that knew her bosses and they chatted about antique paste earrings, which were gorgeous and very well priced. We ended up photographing these two colorful rings, one a racing flag ring, and one an 18K Swiss Enamel ring with a woman giving major side-eye depicted. I needed them both, but once again we walked away to other treasures.

Even just glancing in the cases at the Lenore Daily booth was enough to make your heart burst with all their original boxes and antique red velvet displays. So many old mine cut diamonds and crystal pendants and Victorian oddities that really are my favorite part of jewelry history. 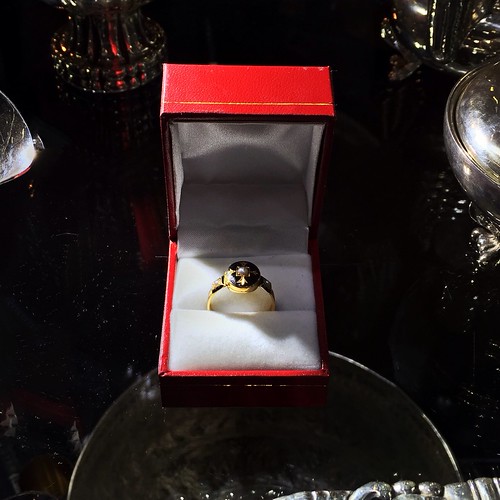 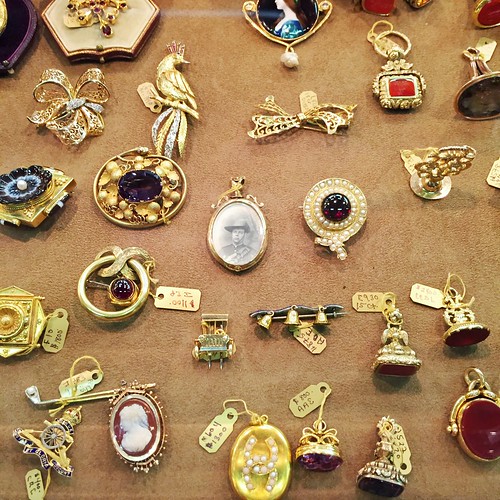 Mary Anntiques (great name!) had this solitary ring in a bright red box within their silver case, and I thought it just made for a stunning photograph. I’m also really drawn to rings with yellow gold and black enamel because it’s so graphic and stands out. The pearl set in the center of this ring made it a little younger rather than it being a diamond, but I still liked the easy going look of it.

Tutto Dal Mondo from Penn Valley, Pennsylvania by far had the best display cases. They were wooden boxes with low glass lids and warm golden lights all along the inside. The cases were filled appropriately without being congested, and each piece looked like a special Victorian talisman. I love fobs and garnets and yellow gold, so I was beyond enchanted with this case. 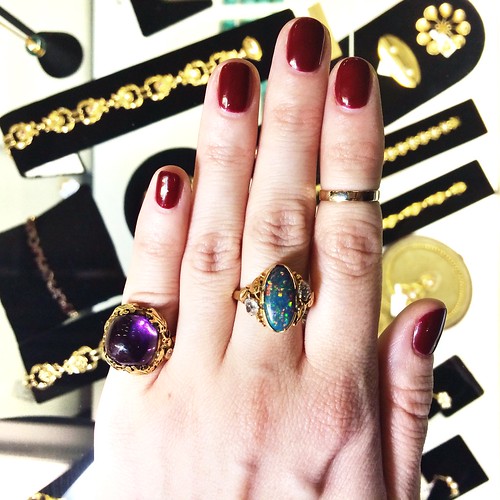 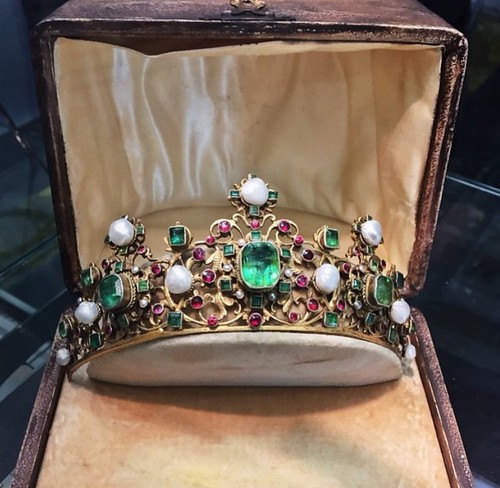 Last on our list was Drucker Antiques, who is a major retailer and collector of significant Georg Jensen pieces, which I am obsessed with, but they had some other stunning jewelry aside from Jensen. This Australian black opal and old mine cut diamond ring was filled with fire, and the cab amethyst ring was so small, perfect for Sara’s slim fingers, and had a really ornate setting. It felt like Marcus and Co. to me, which is another dream jeweler.

As we walked out of the Pier Show, nearly two and half hours after we arrived, we were dizzy. Had we seen everything we had wanted to see? Absolutely not. Had we had our fill of more than we could ever possibly process? One hundred percent, yes. We had chatted with dealers we had wanted to meet, connected over our mutual friends and shared our love of beautiful and unique jewelry, and we had handled so many pieces that we would have never gotten to see had we not ventured to the pier.