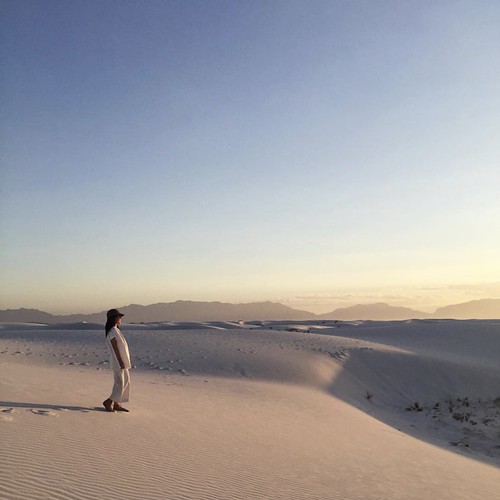 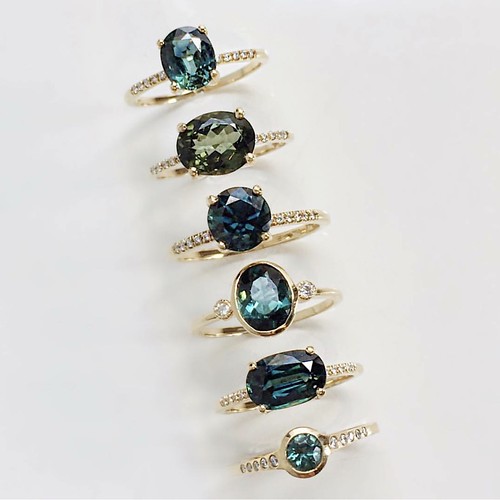 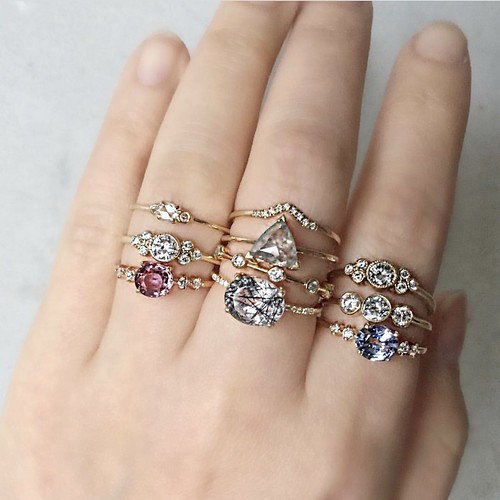 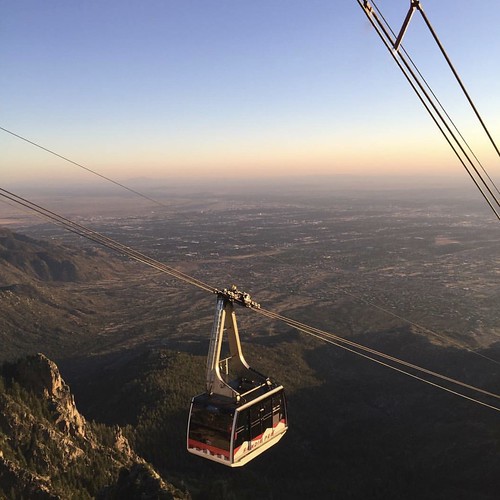 Summertime gives us all the wanderlust vibes you can ever imagine. Our Instagram is typically filled with jewels, gems and all things relating to jewelry design, so it always grabs our attention when our favorite jewelry designers and store owners post an envious getaway pic. We’ve seen glimpses of Paris, tropical islands, Canadian mountains, and everything in between. I’m personally obsessed with the US desert southwest–remember I honeymooned in Sedona, Arizona?–so when I saw a New Mexico landscape scroll onto my screen I had to know more. Luckily the sister duo of Vale Jewelry, Eva & Ava, were more than happy to share about their two-week trip to New Mexico–let’s find out more:

We planned this trip around a visit to Walter de Maria’s groundbreaking land art, The Lightening Field, but it quickly ballooned into a 2-week major road trip around New Mexico. The fifth largest state, but one of the least populated, the vast deserts and scrubland inspired Georgia O’Keeffe body of work as well as numerous other artists. You only have to spend one day there to understand why it’s muse to many creatives, between the sunsets, endless sky, and the ingrained history of crafts. No wonder it picked up the nickname of The Land of Enchantment. Home to most of the US’s oldest Native American and indigenous tribes and pueblos, including the Zuni, Navajo and Hopi, this magical and awe-inspiring land should be on anyone’s travel list. 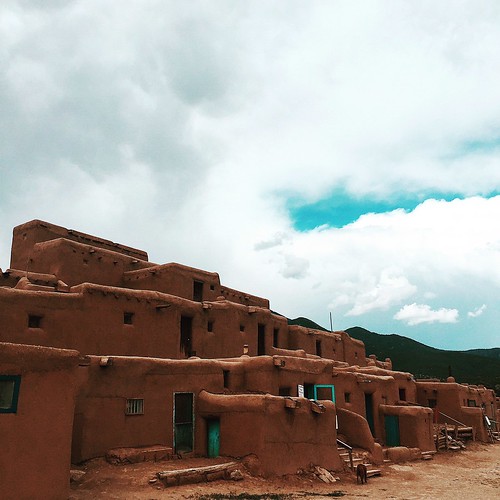 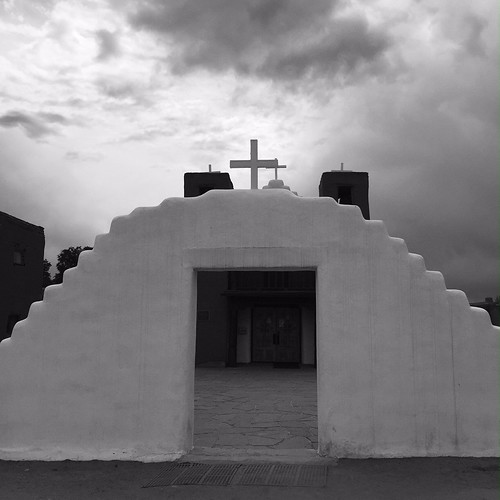 Left photo: One of the oldest continuously-inhabited communities in the United States, Taos Pueblo was built in the early 13th century and located right in the Rio Grande Valley. A UNESCO World Heritage Site, it holds a very active Tiwa-speaking Native American tribe residing in multi-storied adobe houses built as two complexes made from mud, wood, grass and water. This historic village is located just 1 mile outside Taos. About 4,500 members still live in this area, but only about 150 still reside inside these structures year-round without the modern convenience of running water and electricity. While it is a private community, they do offer visitors to come see parts of the village where locals sell crafts like pottery and local eats like fried bread.

Right photo: San Geronimo has a storied past as one of the first post-Columbian Spanish Catholic churches in the US. Built by Native Americans of the Taos Pueblo people under the suppression of the Spanish missionaries and colonial powers, this one featured above is actually the third reincarnation. It was one of the many churches destroyed during the Pueblo Revolt when tensions between the native tribes and Spanish colonial presence boiled over. The current church shown above was built in the 18th century. 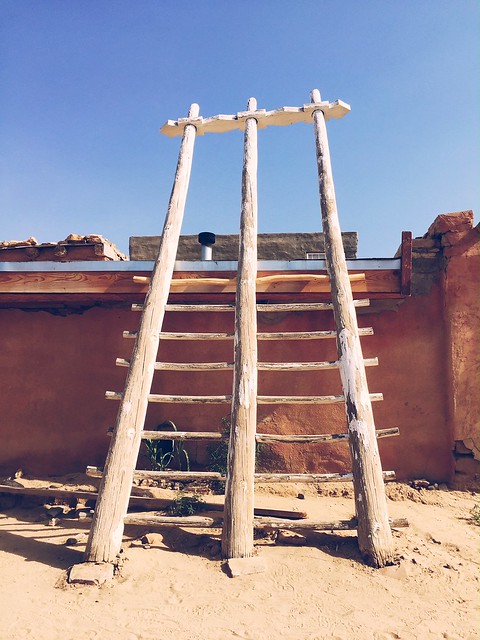 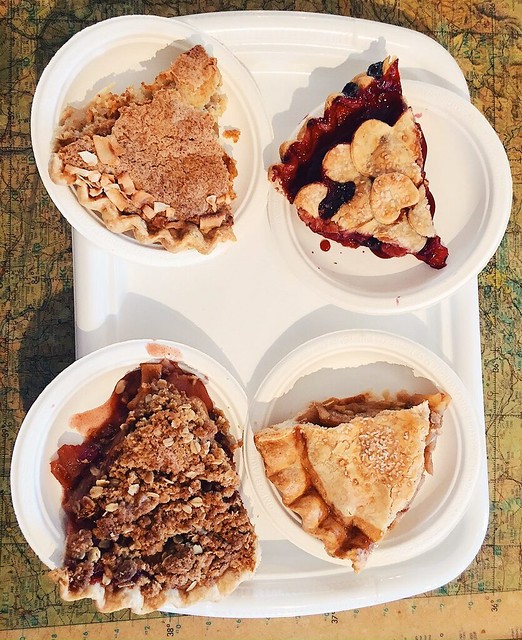 Left photo: The ladder above resembles some of the staircases used in many pueblos as well as native and local adobe houses. Typically, the staircases are made of local timber such as pine, spruce and ponderosa. These ladders were precious items since the wood had to be cut down from forests located quite a distance from local desert pueblos. They were passed down from generation to generation. In traditional Pueblo culture, the people of the original land came to this land by the underworld. Hence, many pueblos build ceremonial underground chambers within these adobe houses called kivas that the chieftains use for religious song, prayer and ceremonies. The one above is one from the Acoma pueblo featuring a double ladder for going up and down with a lightening rod shape holding the two together.

Right photo: On our way back from staying overnight at The Lightening Field in Quemado, we stopped by Pie Town. Yes, you read that right, it’s a town named after one of the best desserts having taken its name from an early settler of the town in the 1920s that made the town famous with a highway pie shop. The pies above are at a local pie shop called Pie-O-Neer. The Macaroon Apple Pie and Cherry Cherry Pies are worth the stop. And yes, we ate all 4…and then took a few for the road. 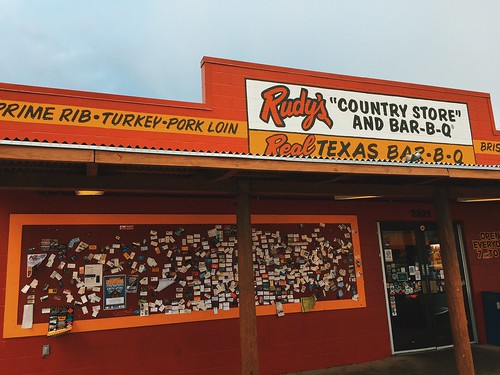 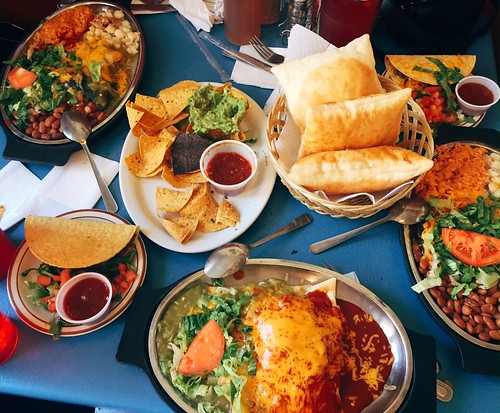 Left photo: One of our favorite stops for local barbeque, Rudy’s had the most incredible brisket and baby back ribs, this is the place to stop for New Mexican bar-b-q in Albuquerque, friendliest staff and the tastiest homemade cherry and apricot cobblers this side of the Rio Grande! If in Santa Fe and craving local barbeque, stop by a food truck called Santa Fe BBQ.

Right photo: A must when you’re in Santa Fe. The New Mexican picnic above is breakfast at a local favorite called Tia Sophia’s. They make some of the best sopapillas, the pillowy fried quick breads in the image. Order everything ‘Christmas’ which means doused in both the red and green chiles. Also, a stop at Gabriel’s just outside Santa Fe is a must too. Known for their tableside guacamole and carne adovada, neither will disappoint! The local enchiladas and tamales are things to order when in town. 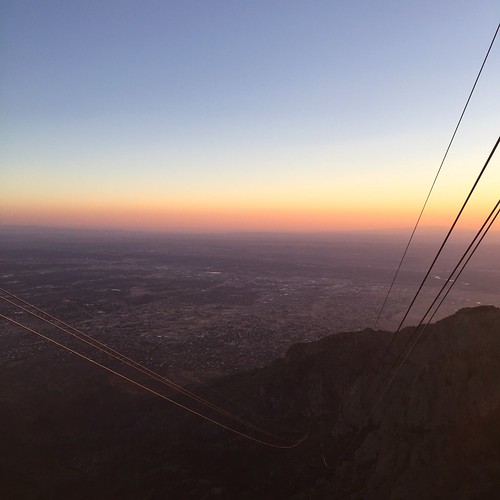 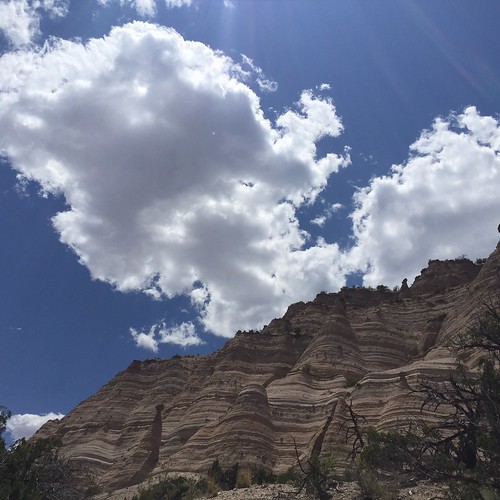 Left photo: This is the view from Sandia Peak after hopping off the tramway. The crest here reaches over 10,500 feet and the tramway’s the world’s second longest ride. The sunsets and sunrise in New Mexico are unreal, typically fiery red and orange against the bluest backdrop.

Right photo: A quick hike in Kasha-Katuwe Tent Rocks National Park is a must if you’re in central New Mexico. Formed by volcanic ash deposits that have since been weather-worn to form sand-colored cylindrical cone shapes standing side-by-side. A walk in between these canyons is awe-inspiring. 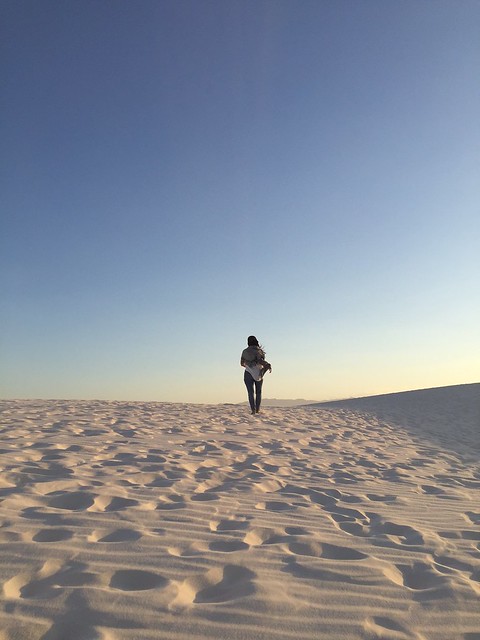 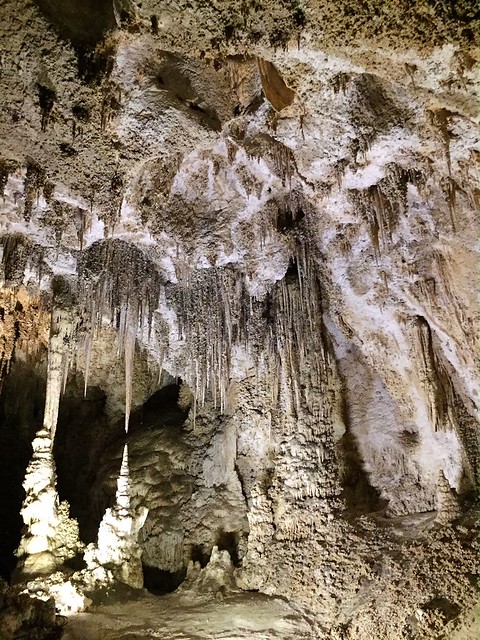 Left photo: No trip to New Mexico is complete without a stop at White Sands National Park. The world’s largest gypsum dune runs for over 275 square miles. So big, this dune can even be seen from satellite in outer space. Despite temperatures reaching 120F during the afternoon, the gypsum sand never gets hot due to the gypsum crystal’s natural ability to reflect the sun and the fact that it does not convert light into heat. We went barefoot and even did some dune-sledding down the steep cliffs. For a cool experience, plan to camp overnight.

Right photo: Another stop along the way is Carlsbad Caverns and watching the enchanting Bat Flight where over 500,000 local Brazilian Free-Tailed bats make their nightly migration from the cave to feed. It’s a coordinated visual symphony! 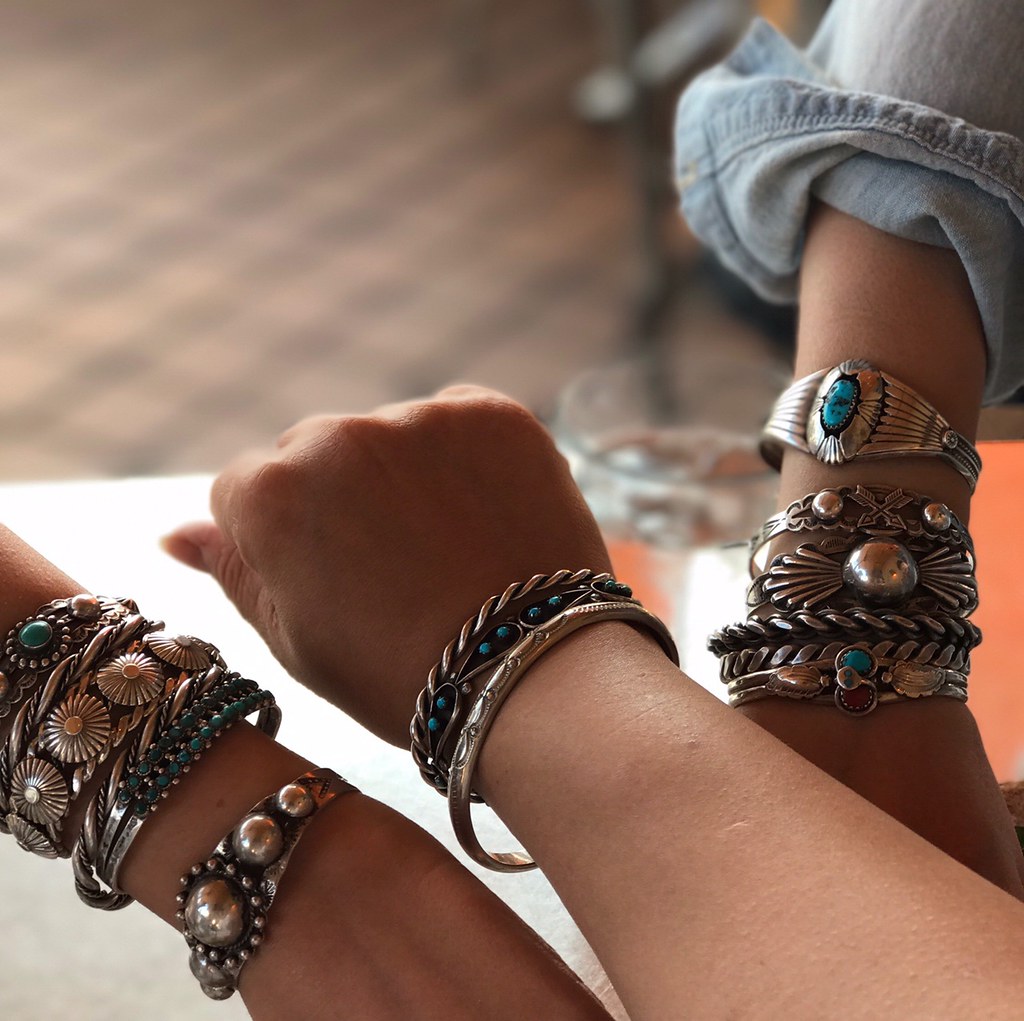 Showing off some vintage Native American silver by Navajo and Zuni tribes made between the 1900s and 1950s. We picked up these older pieces during our travel around New Mexico. Some of our favorite stops include: