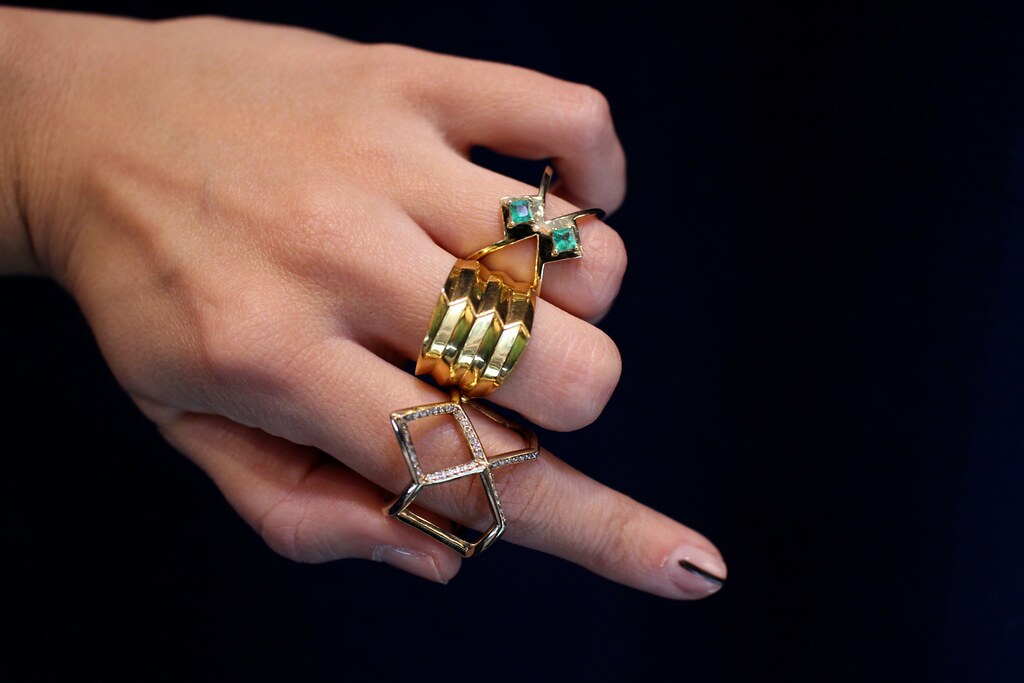 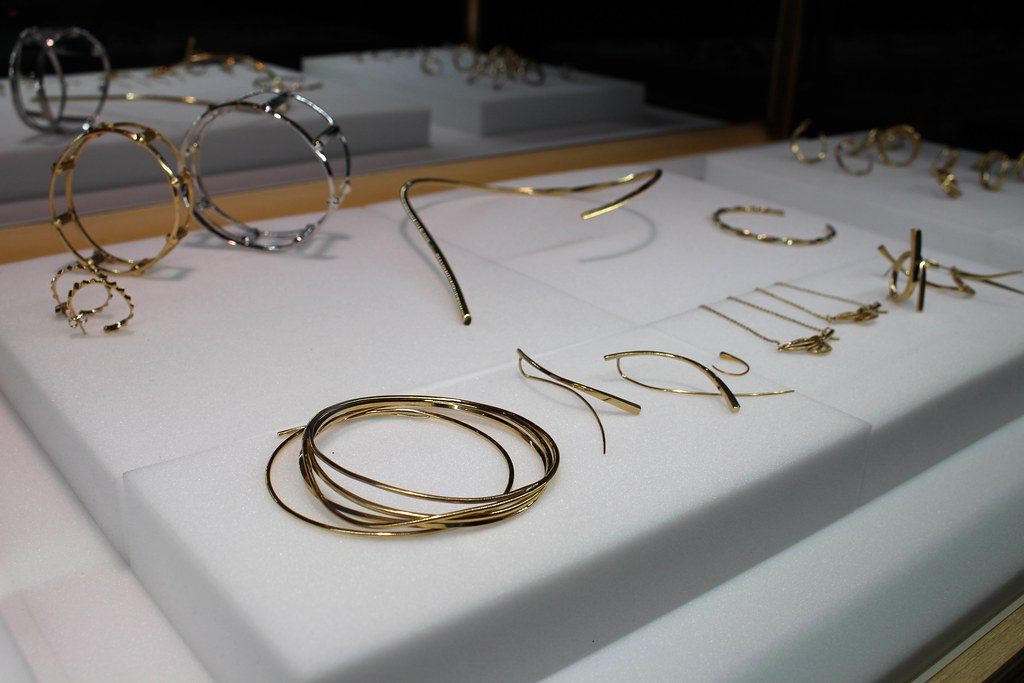 The fluid, free-flowing designs of Completedworks are done in 18k yellow gold and are mesmerizing 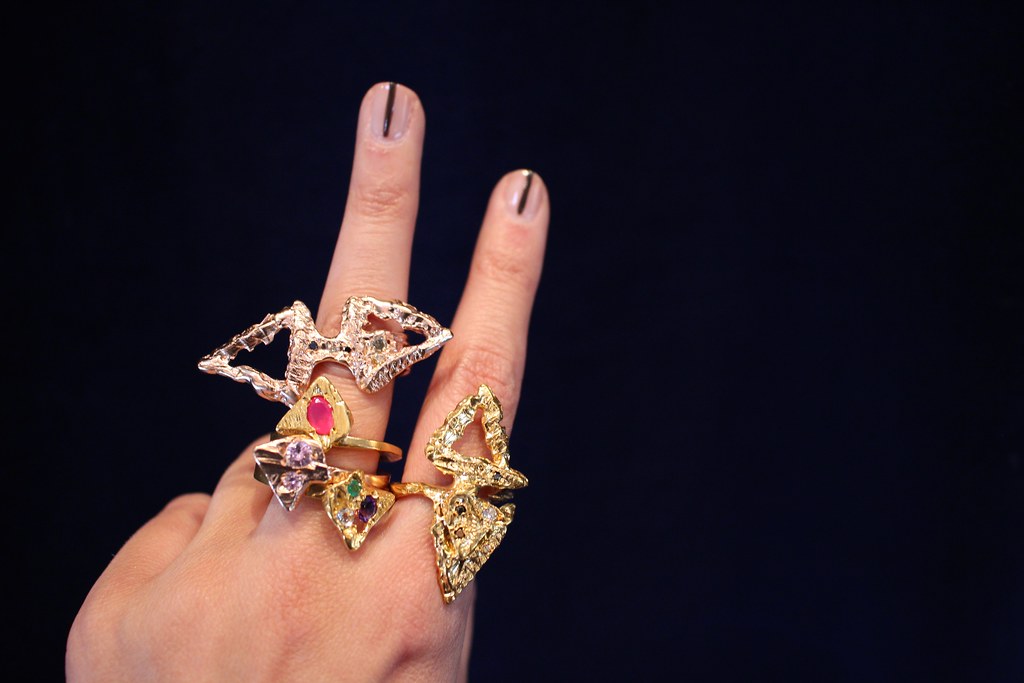 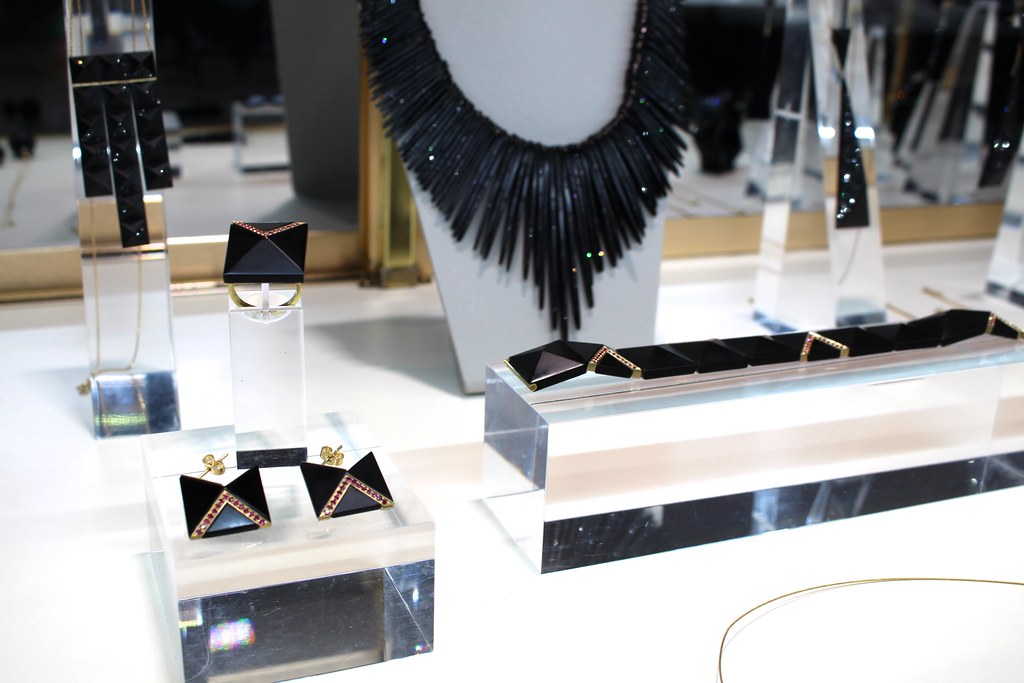 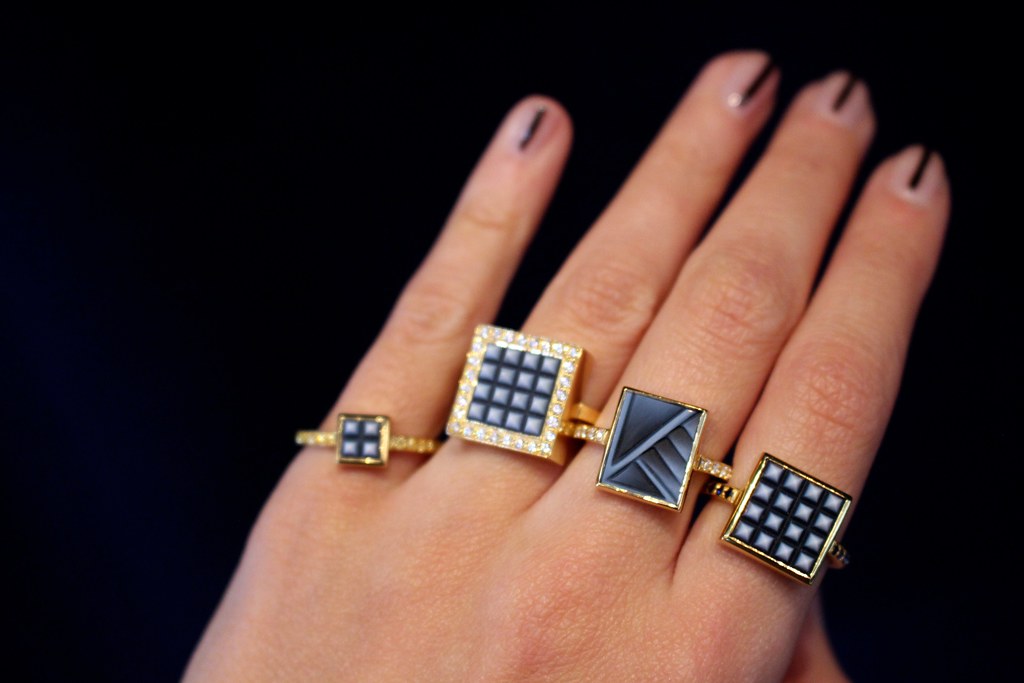 These rings by Lily Kamper made me say, “WOW!” They are set with specially carved agates 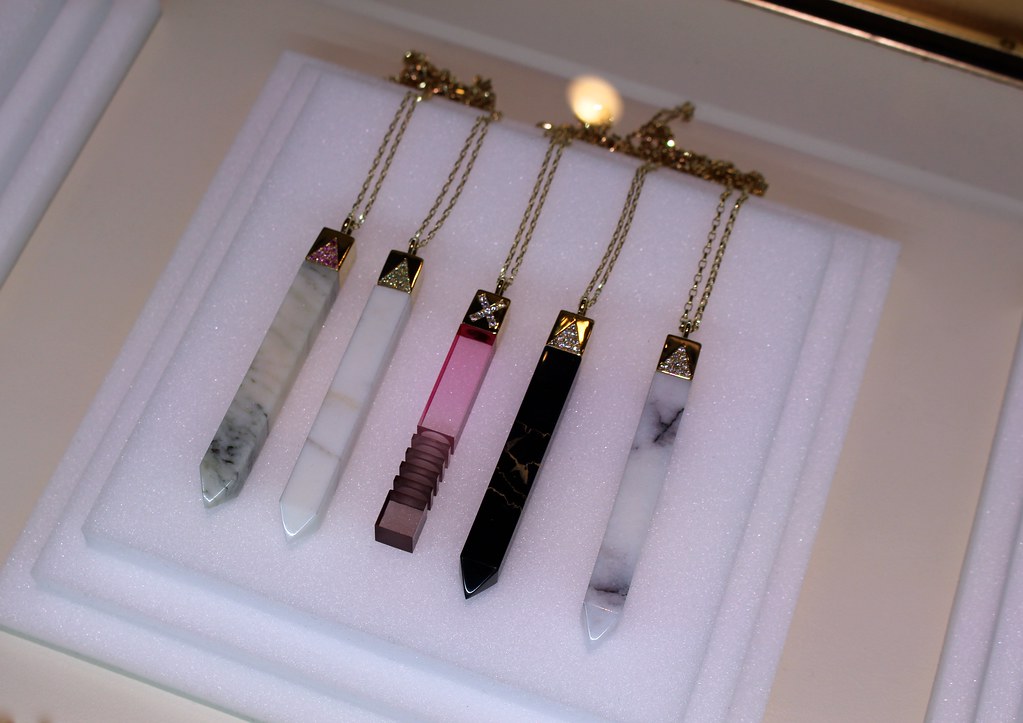 And here are her signature necklaces done in Perspex and Marble set with end caps of 18k gold and gemstones, by Lily Kamper 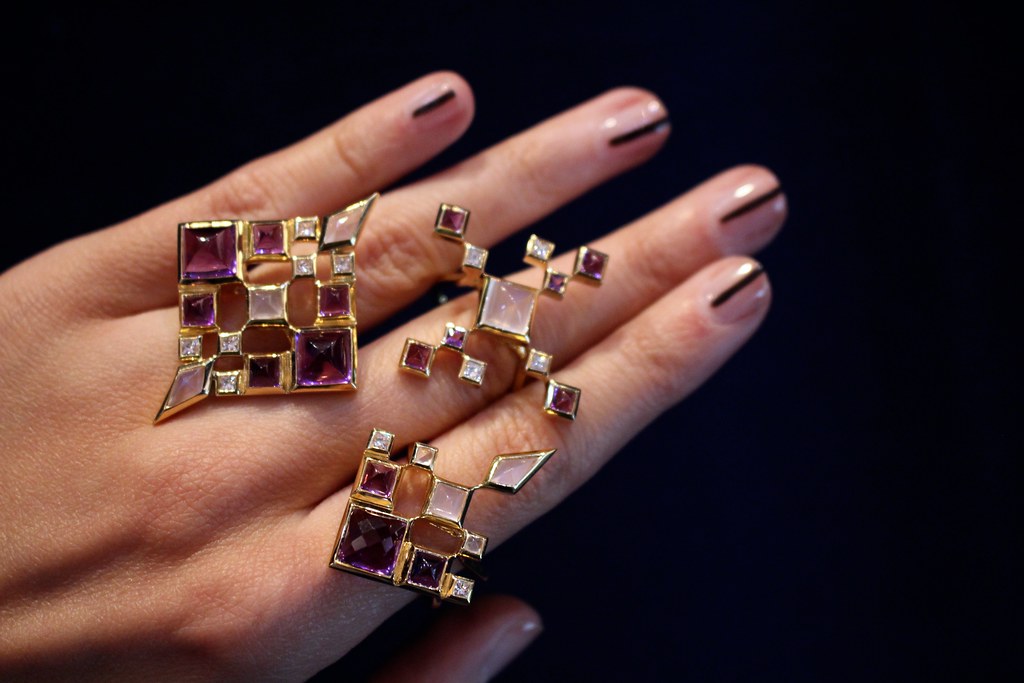 Was so excited to get to see RUIFIER’s designs in person! The colors and geometric shapes are everything! 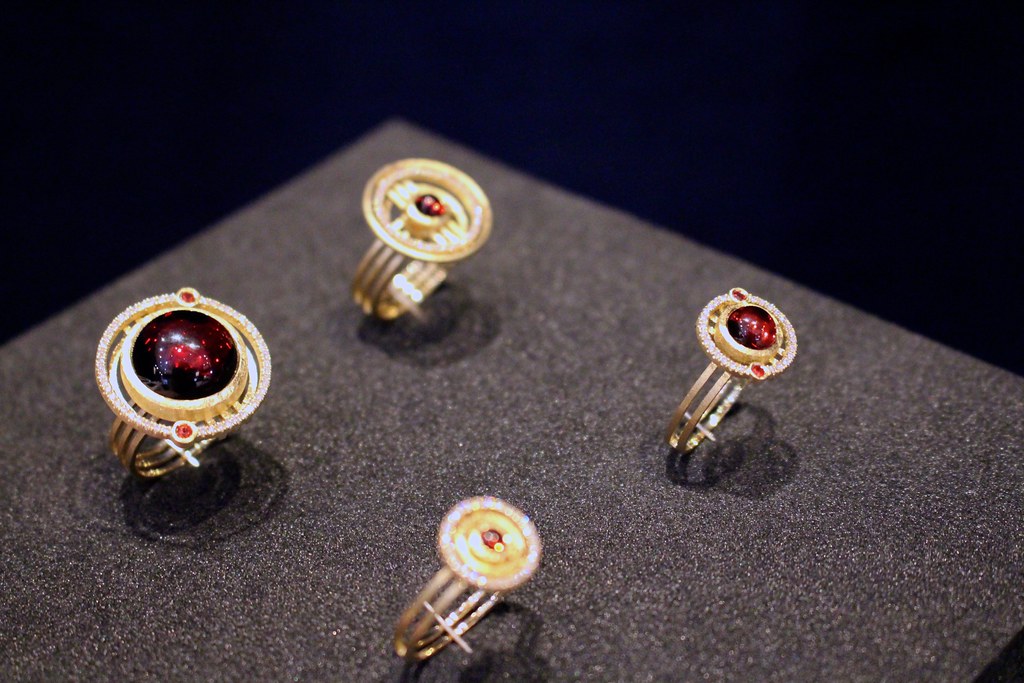 Shimell & Madden also blew me away–extremely modern, with lines and curves making up the collection. Love the matte finish and the multiple shanks. 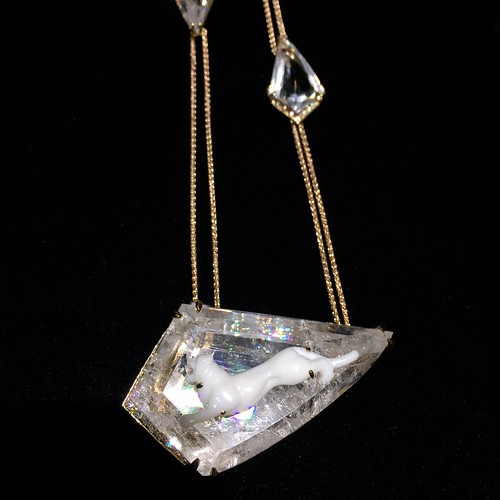 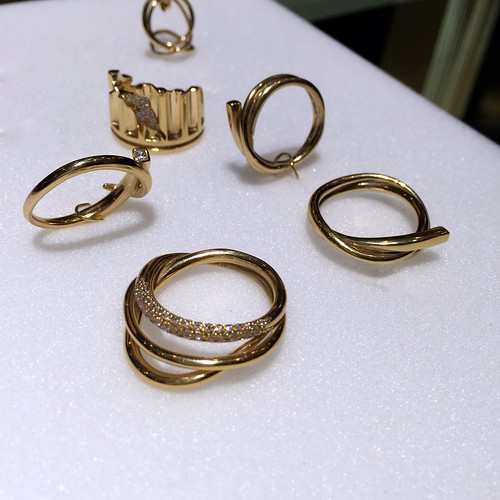 Photo on the left, Jordan Askill’s necklace made of rock crystal with a 3D panther carved out of white cacholong set on top. The photo on the right features more rings from Completedworks.

If you’ve ever wanted to sneak off, away from all the hustle and bustle of Couture, and be instantly amazed, refreshed and wishing you spoke with a British accent, I highly suggest checking out Stephen Webster’s jewelry initiative called Rock Vault. This mini-ballroom hosts eight highly talented British designers, all whom are bringing their insanely gifted skills to the US. As I strolled along to each designer and spoke with them about their creations and inspirations, it became clear as to why Stephen Webster started Rock Vault in the first place!

“Rock Vault is a jewellery initiative to support, showcase and promote Britain’s most innovative, fine jewellery talent. Curated by Stephen Webster, this unique showcasing initiative has been developed by the BFC to nurture the creative fine jewellery talent based in London. It gives these designers the opportunity to further develop their businesses, as well as exposure amongst both UK and international media and retailers.”

Rachel Boston Jewellery: a young, talented designer born and based in London with a wild imagination. Nominated for numerous awards, including New Designer of the Year at the UK Jewellery Awards. I’m completely obsessed with her Anceps ring done in 18k yellow gold from her latest collection called CONTRA. Fun fact: Rachel got married in Vegas after the show! Congrats to her!!

Completedworks: Flowing lines, bold architecture, fluid shapes…Completedworks was on my list of “must-sees” for Couture since I began planning. Artistic Director Anna Jewsbury has a unique background in Mathematics and Philosophy, which truly defines the line. The Pillar collection is inspired by architectural ruins, like the classical columns, and they are done in white and black marble, jade set in 18k yellow gold.

Imogen Belfield: with a background in Fine Arts and Sculpture, one look at Imogen’s designs and you can see how that path has influenced her creations. Her fine line just recently launched, with each piece being carvings all hand-done, which take on the form of rocks. The gemstones she uses are quite unique as well–I was taken back by the hot pink stone in one of her designs–so cool! It is actually an extreme heat-treated onyx (you can see the neon pink color in the photo I took above). She also just won the Couture Design Award for “best in gold” category!

Jacqueline Cullen: precious Whitby jet–a prehistoric fossil which dates back 180 million years which is most well-known in jewelry form from Victorian mourning jewelry. Jacqueline creates contemporary pieces of jewelry using this now very rare organic material. Her designs are innovative and have graced the pages of magazines and celebrities alike.

Lily Kamper: her love for unusual material combinations and modern luxury define Lily’s aesthetic. Her iconic pendant necklaces made of marble and perspex are all hand cut. She also has a bridal line just as unique as her other designs and her newest collection features hardstone jewels set in 18k yellow gold.

RUIFIER: I’ve been following this brand for a few years now and so excited to finally see their collection in person! RUIFIER knows how to push boundaries and create really unique pieces. They also have a knack for choosing great color combinations and gemstones for each design.

Shimell & Madden: created by duo Luke Shimell and Emma Madden, this London-based jewelry line fuses high-quality craftsmanship with scientific design and universal concepts. Each piece looks as though it belongs in a museum, while at the same time, extremely wearable. I was instantly wowed by this jewelry line.

Jordan Askill: last but not least, this jewelry line is evocative, nature-inspired and jaw-dropping. From the gemstones used to the designs themselves, each part of the overall design is planned out with utmost precision. Jordan’s background working for Alexander McQueen and throughout the fashion industry helps embellish his journey as a jewelry designer. His work and accolades extend far and wide for such a young designer, I can’t wait to see what is next for him!