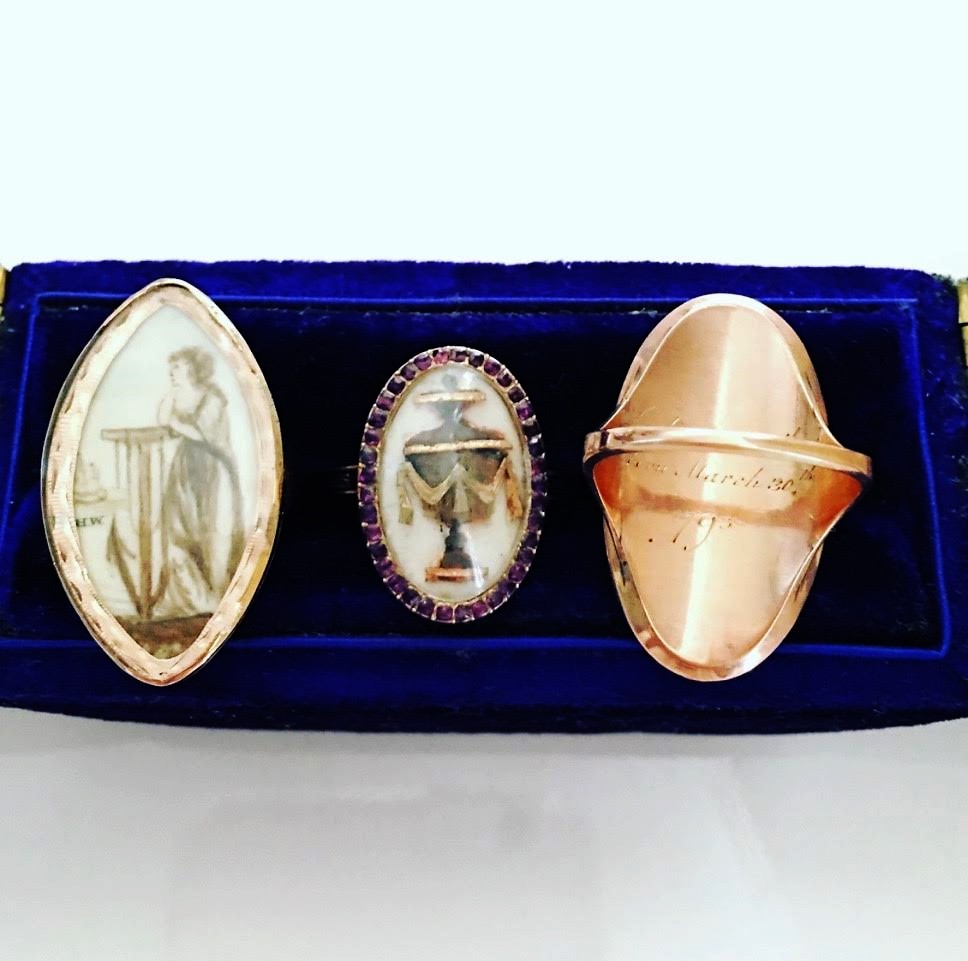 This entire week I am dedicating to the Jewelry Collection Stories segment, as I feel this is the perfect way to end 2015. What an amazing year! I can’t think of a better way to leave you than with FIVE amazing collection stories from some incredible collectors of jewelry. It is a great way to reflect on what we have as collectors and what we have to look forward to in the upcoming year! Start planning some antiquing trips, jewelry show visits and hours of hunting online–2016 is your year!

Our first Jewelry Collection Story comes from Alison–or what our circle knows her as: @duvenay. I’ve been such a fan following her on Instagram and seeing her gorgeous collection, it is a treat to see it in her own words right here:

“I have always loved jewelry. The first toy I remember is a long necklace of orange beads that my favorite aunt gave me. I have always gravitated towards antique jewelry. I’m a genealogist, so I especially love pieces that I can research, that have a history, or a story to tell. Here are some of my favorite pieces, starting with the Georgian era:

(Above) I love mourning rings. I know it’s weird, but I’m obsessed with urns! My favorite part is the back, if there is a good inscription. 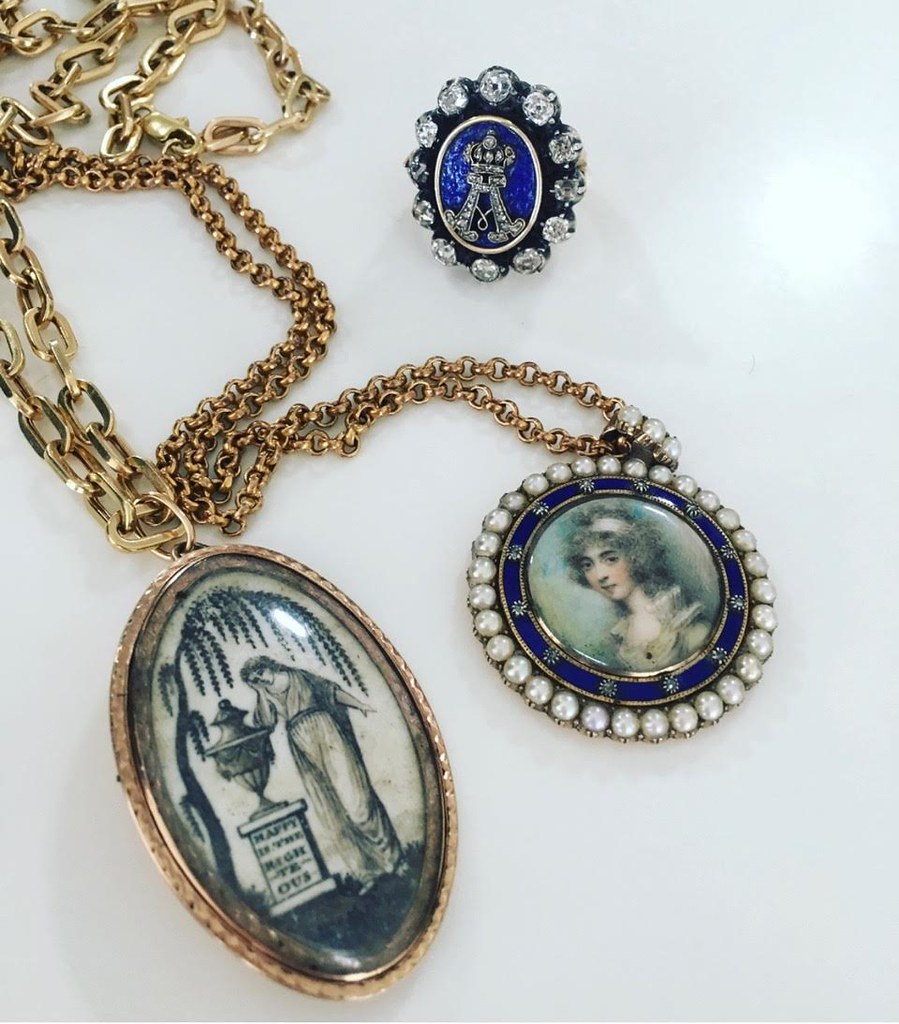 At the top is my beloved “A” ring, for my first name (Alison), which incorporates some of my absolute favorite things: blue enamel, old mine cut diamonds, and a royal cypher. I wear this ring during the day, in a very casual way. It’s quite large and was definitely meant for a man, which I love. Below it are a Georgian mourning pendant (left) and a Georgian portrait miniature (right), also with blue enamel. 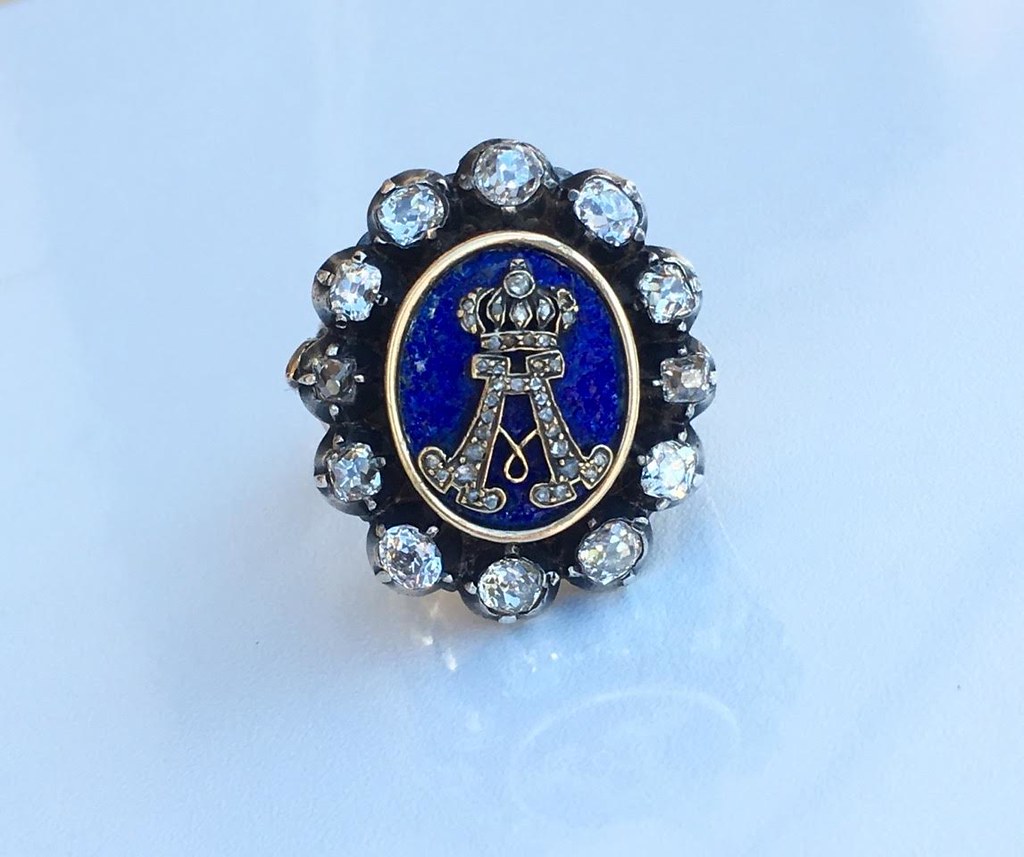 Above is a closeup of my “A” ring. This ring is definitely at the top of my list of all time favorite rings. 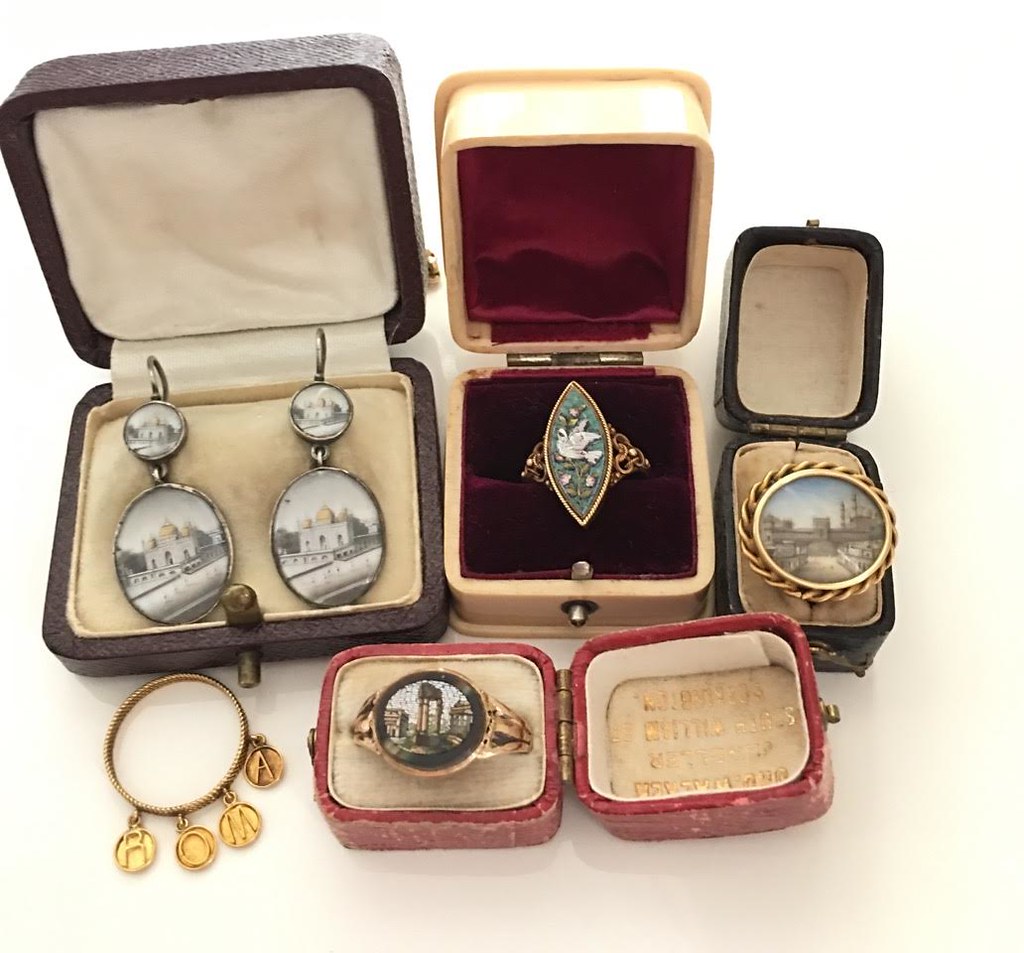 I’m particularly fond of Grand Tour souvenir jewelry from the Victorian era. My fascination began when I was given the gold “ROMA” ring from my aunt. Later, she unearthed an album detailing the late 1800’s Grand Tour by her great grandmother, Ella. It is one of the most beautiful things I have ever seen. Each page has either drawings by her, calling cards of people she met along the way, hotel postcards, or most commonly, pressed flowers taken from every place she visited. My favorite is an invitation to a masked ball she attended while in France. After that, I was smitten with the whole idea of the Grand Tour. For me it has special meaning as well, because I grew up abroad, and later studied in Italy. My father was in the Foreign Service, and my parents met in East Africa, and for some reason, my family has one way or another, always been associated with travel.

Above, from left, are a pair of earrings with paintings of the Taj Mahal. These are very special to me because I lived in India as a little girl. Next is a Victorian micro mosaic ring from the Vatican workshop, another ring with an amazing painting of Istanbul, a micro mosaic ring of my favorite ruins – the Roman Forum, and my ROMA ring. The coins spell PACE on the reverse, which means peace in Italian. 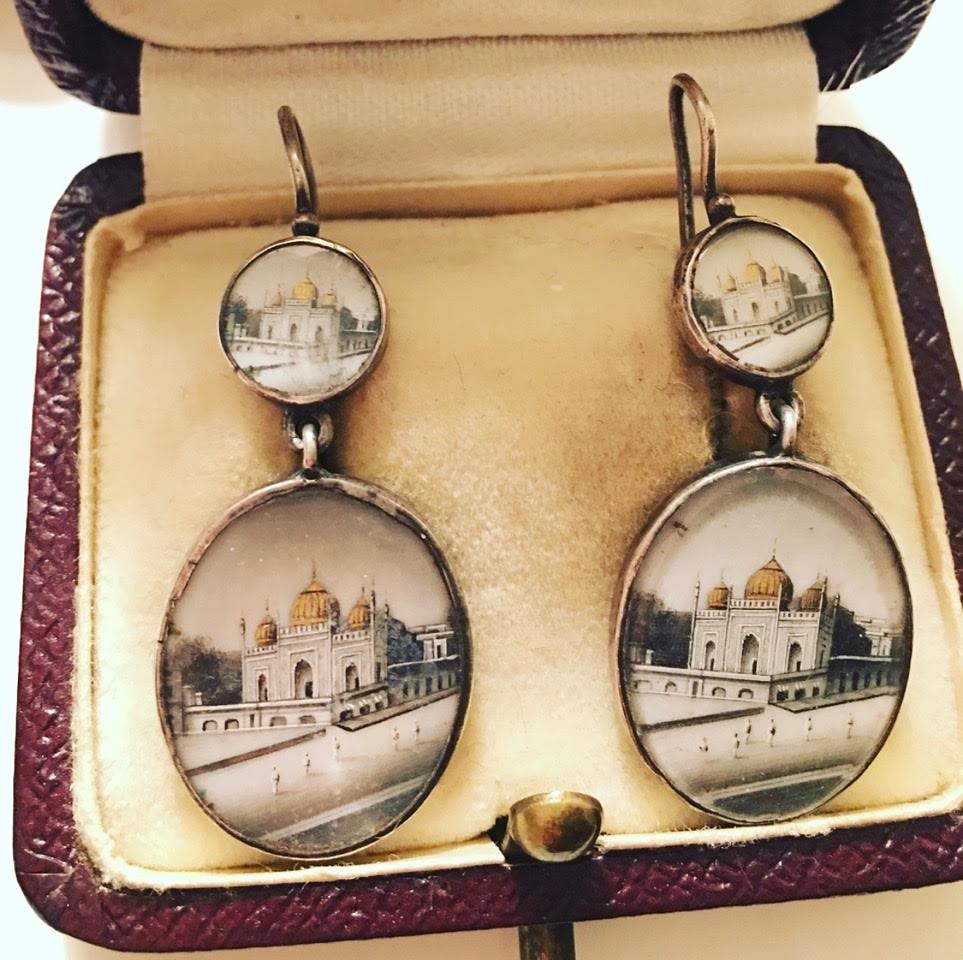 Above is a closeup of the Taj Mahal earrings. 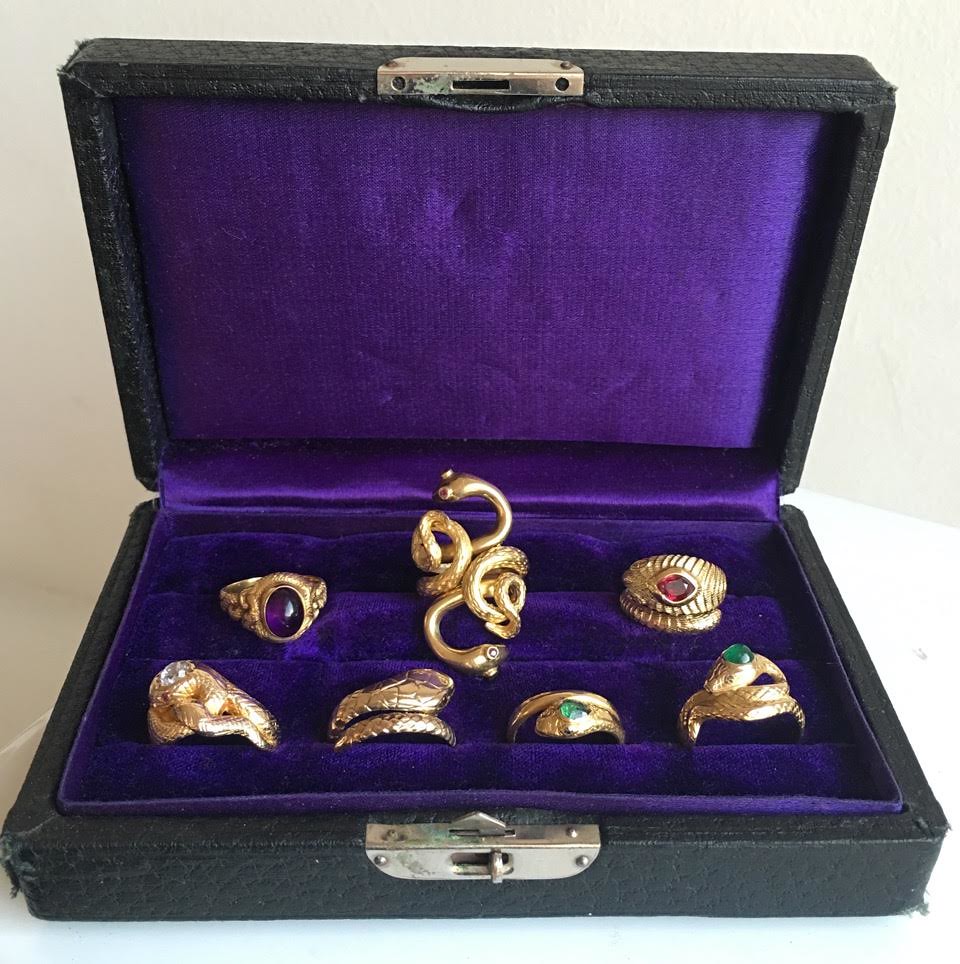 Speaking of India, I think my fascination with snakes stems from my childhood there. Snakes came up a lot in casual conversation. There was the time my brother almost stepped on a baby cobra, because he foolishly walked outside in bare feet at night, and people would tell my mom things like “never park your car under a tree.” The reason had something to do with snakes. I don’t like them in real life, only in gold or silver, and preferably with gemstones. Top right snake above is my favorite,  it is a cobra from India with an amazing ruby. It was my mother’s. 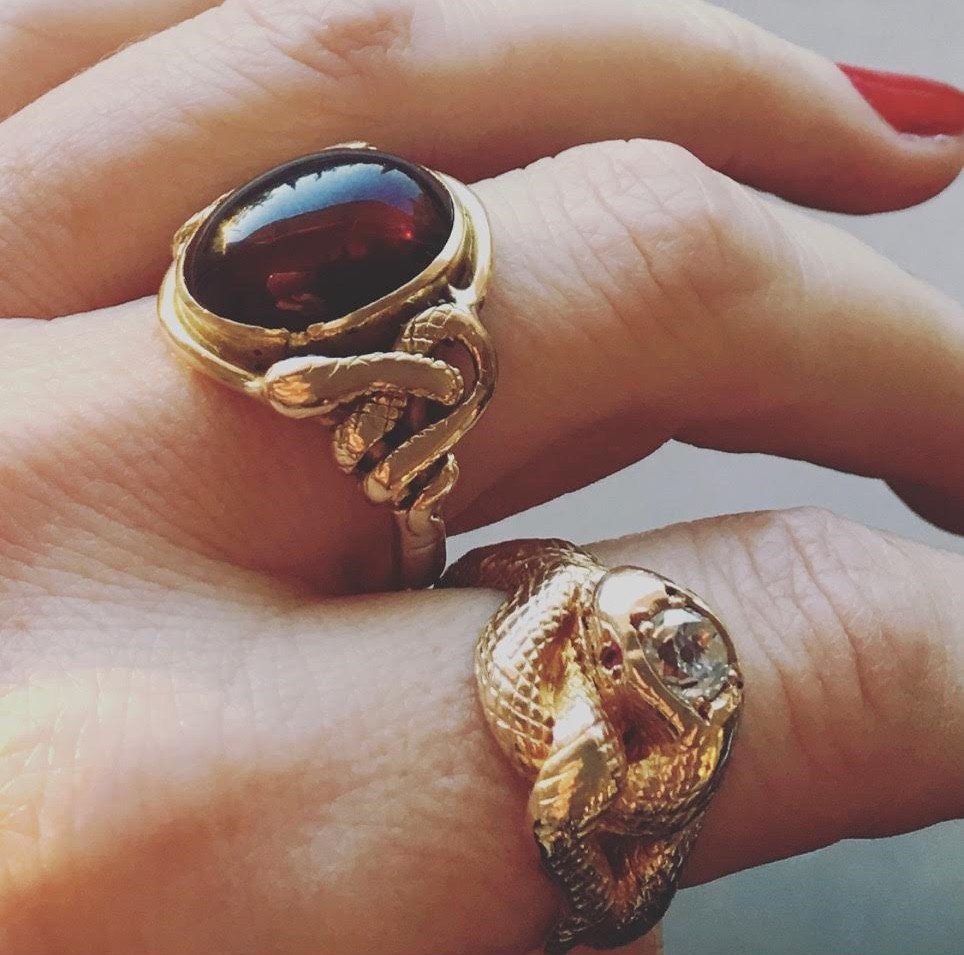 Above–a garnet cabochon with snakes and a large gold snake with an old mine cut diamond. Both are Victorian. 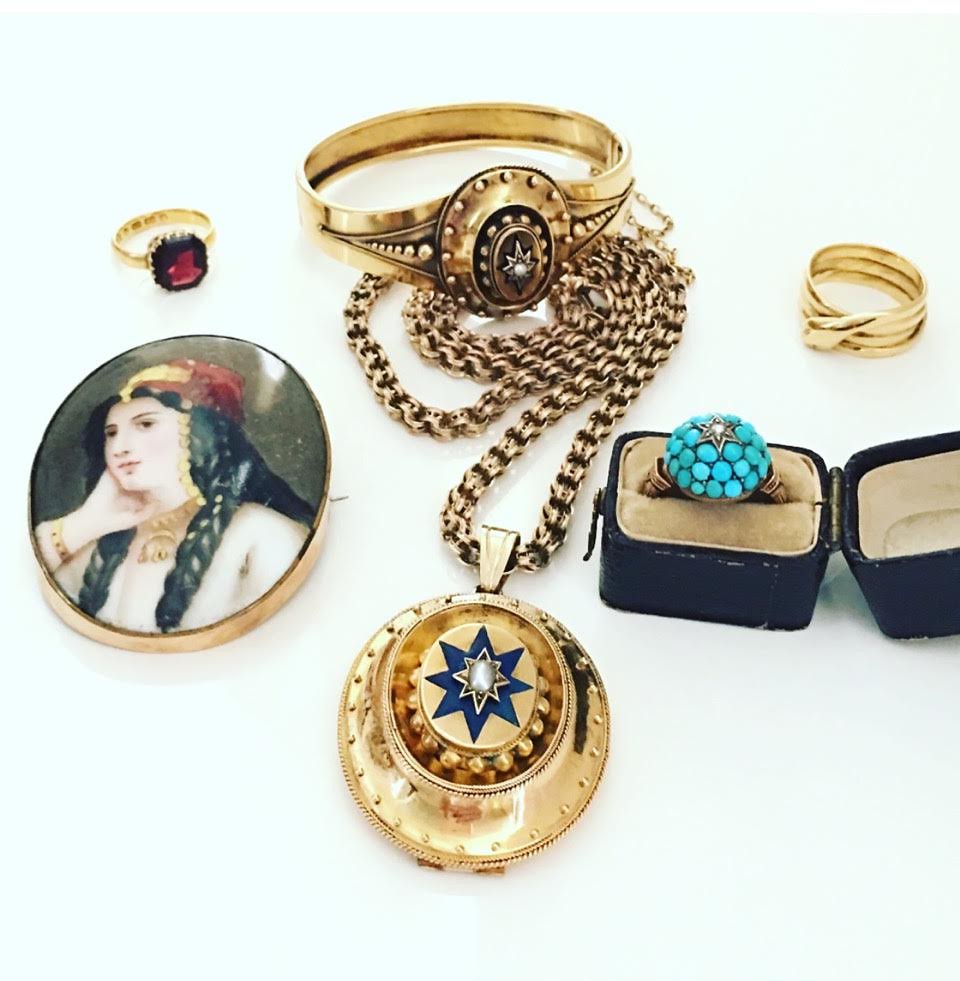 I also like to collect jewelry from the Victorian Etruscan Revival period. I love stars, and they were a common theme during this time period. I also love that ancient techniques with gold were revived during this time.

Above, clockwise from left are a 22 carat gold and garnet ring from circa 1880, a memorial bracelet, a gold snake from the same era, a pavé turquoise dome ring with a diamond star, a memorial locket pendant with a star, and a painted portrait of an Egyptian woman, also from around 1880. 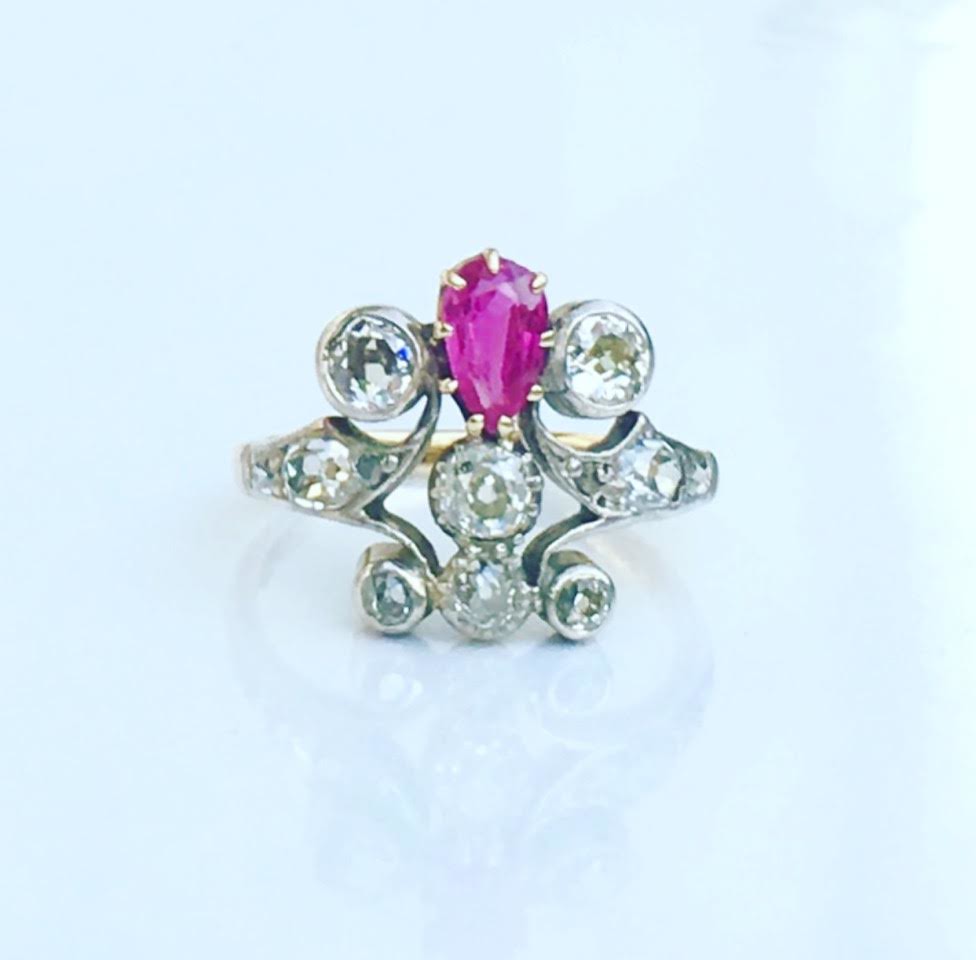 I also love Edwardian rings, and this is one of my favorites. It had been in the same family its entire life, having been custom made for the original owner and passed down to the wife of the last surviving heir. The reason she sold it to me is very sad but funny. She told me she had always admired her mother in law, who was from a well-to-do English family, and was thrilled to have inherited this ring from her. She felt loved and appreciated by the gesture, and she had always adored the ring. But after her husband died and she became a widow, she found her mother in law’s diary, and discovered that on her wedding day, her mother in law had written “Today my son married a Russian spy.” (She is in fact, Ukrainian) She was deeply offended by this, and could never again stand the sight of the ring. She actually referred to it as the “Spy Ring.” Having grown up with a Dad who was a Russian language expert for the U.S. government during the cold war, I met lots of “spies,” so I reassured her that I could handle the “Spy Ring.” I love the old cut diamonds and the pear shaped ruby, and the stylized fleur de lis design. I also think it looks like a butterfly. 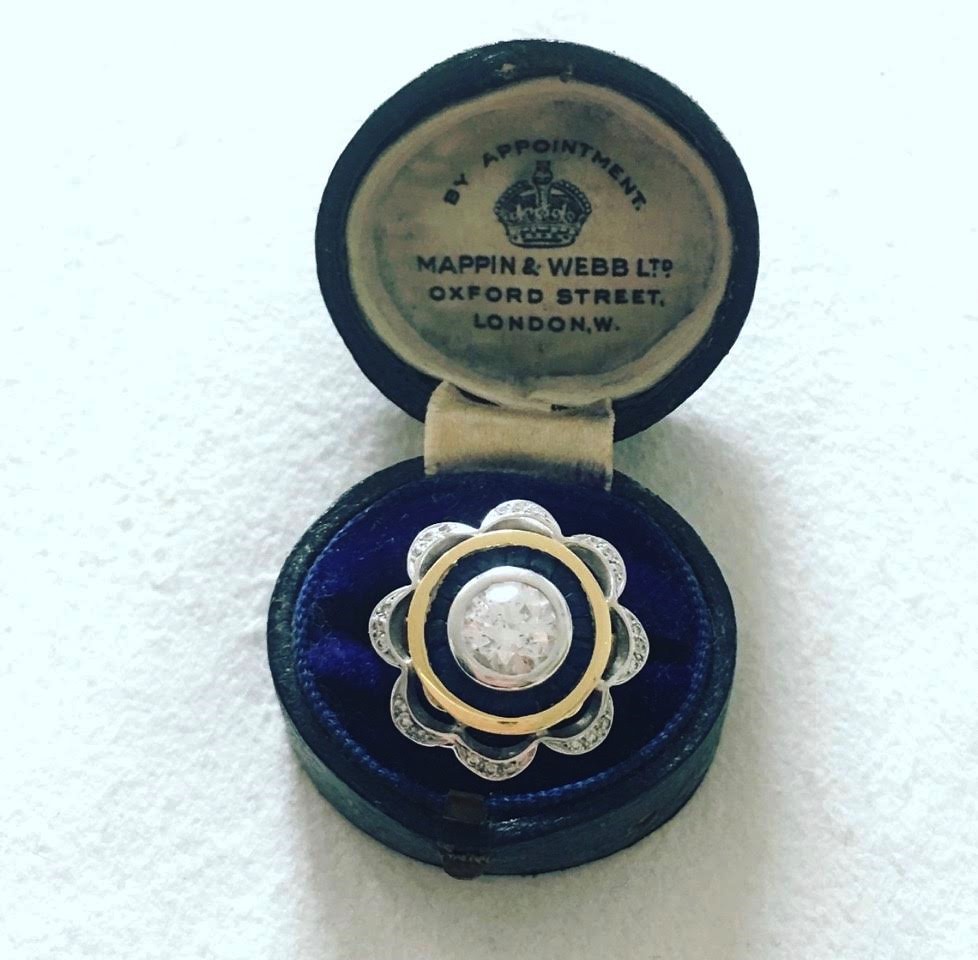 Last but not least, my very favorite ring of all is also Edwardian – my engagement ring!