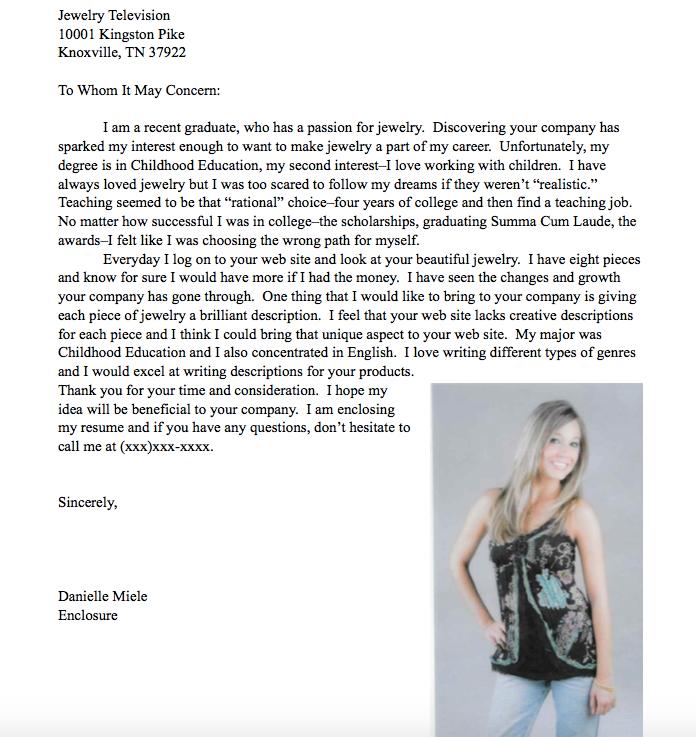 The above letter is 100% real, frozen in time, written and sent in 2006. I was speaking from the heart, although at the time it was broken and lost. Gem Gossip wasn’t born yet–I’m not sure blogging was even a thing back then. I was a recent college graduate with a degree in Childhood Education: four years of hard work, dedication and not to mention money spent on a career choice that I randomly chose one day as a sophomore in high school. It wasn’t hard for me to understand that what I had chosen as my profession on that ill-fated career day wasn’t right for me–I could feel it every time I stood up in front of a classroom full of eager eyes, I could see it in my face when I would get a 6am phone call to substitute, I could hear it every time the school bell would ring. I love kids, but this wasn’t my passion. I should have tried dealing with all this built-up anxiety and frustration. Instead, 22-year-old me hunkered down in my room, day-in-day-out, trying to avoid substitute teacher calls.  I knew not answering them would just lead me further and further away from a permanent position, but at the time I didn’t care.  Looking back now, I can say that I most definitely was in a depression, but I would have never admitted that. It is hard to admit you don’t want to do something anymore after convincing yourself that is was right for all these years. It essentially would be like quitting, and that was a tough word to say for me.  More importantly, I felt like I would let down my whole family, especially my dad.

Luckily, I had a boyfriend at the time who was really supportive and always looked at things with the most practical and positive viewpoints.  I remember him making me do things I thought were stupid, but in hindsight I think these things saved my life and I actually still use them today. He would tell me write down lists of things that made me happy.  Then from that list, I had to explore possible careers or activities I could participate in that would have to do with those things that made me happy. He also used to make me write down goals all the time–big goals and little goals, nothing was out of the question or considered “unreachable.” At the time I had already explored the item that ranked number one on my happy list–jewelry. I was constantly surfing the internet and staring at jewelry.  It became my obsession, as it always had been…I just never had this enormous amount of time to devout to anything else but school.

I learned anything I wanted to each day–one day stumbling upon Jewelry Television and feeling like I had discovered King Tut’s tomb (at least for someone with a just-graduated-college budget). This website had everything–pendants, rings, earrings, gold necklaces, bracelets…and most importantly a large percentage of the jewelry was REAL. That’s one thing that always defined what I wear–I love gold and real gemstones, no silver or gold-plated. Heck, the pieces may have been 10k gold and used commercial-grade gems, but I didn’t care. I would buy pieces…I even took a few jobs as a substitute teacher, hating every moment but knowing it would get me a paycheck to buy something new.  I started filling out questionnaires for Jewelry Television’s customer satisfaction program, and getting 20% off coupons, all while cataloging my favorites and making wish lists. I even remember creating a “How to buy me a gift” guide for my boyfriend at the time, intricately describing things I liked and didn’t like, all using graphics and examples. This was truly the beginnings of a makeshift blog, I just hadn’t known it yet.

Just as my momentum started going, I got the courage to write the above letter. I remember citing that the coolest job I could possibly think of for myself at that time in my life would be to write the jewelry descriptions for the jewelry on Jewelry Television. Yes, that was my number one dream job. After figuring that out, what was the next step to achieving this “dream job?” Well, I came up with writing a letter to the company. I remember my boyfriend telling me, “Hey, what’s the worst that could happen?!” And he was right–we often spend too much time thinking about all the reasons why we can’t or why we’re not good enough. If I didn’t take a chance and write a letter that probably never got read, or probably never even got opened, I wouldn’t have began healing and learning valuable lessons of taking chances…to go for it. So even though as farfetched it may have seemed to write that letter, it opened many doors for me.

As I sat down at my desk last week early one morning, I did my usual routine–check social media, get a big glass of water and hunker down on my inbox. LinkedIn‘s an interesting website.  It’s different. It’s not like other social media platforms. It’s kind of weird. I joked one time about getting “endorsed” on LinkedIn by someone whom I’ve never met before. That’s just wrong. Anyway, I got a “request to connect” email from Bill Kouns, current Chief Merchandising Officer and Co-Founder of Jewelry Television. Eight years later HE wanted to connect with ME. That took me awhile to fully grasp. Talk about coming full-circle. And my, oh my how crazy can life change in ten years when you find your passion and go for it.

Hopefully this gives you a better idea of how things started for me.  I know I get asked that question a lot, but I find it hard to answer without telling someone my whole life story.  It’s just never as easy as, “Well one day I sat down and started a blog about jewelry because I love jewelry.” It is so much more than that. And everyday I like to remind myself how and why I started Gem Gossip.  Sometimes the hype of having 100k+ followers on Instagram, or having an inbox full of designer pitches can get overwhelming. Or even the negative aspects of having a somewhat successful career, like the hurtful comments I get on Instagram from time to time, or people in the industry judging me without ever getting to know me can take their toll. It is those moments where I like to stop and remember the girl who wrote this letter…the girl who checked her blog a few days after publishing her first post and freaked out because it had 7 views…the girl who just plain loves jewelry.  That’s me.  I’m still that girl, I’m just grown.

If you know of someone suffering from depression or feel as though you may be, please reach out.